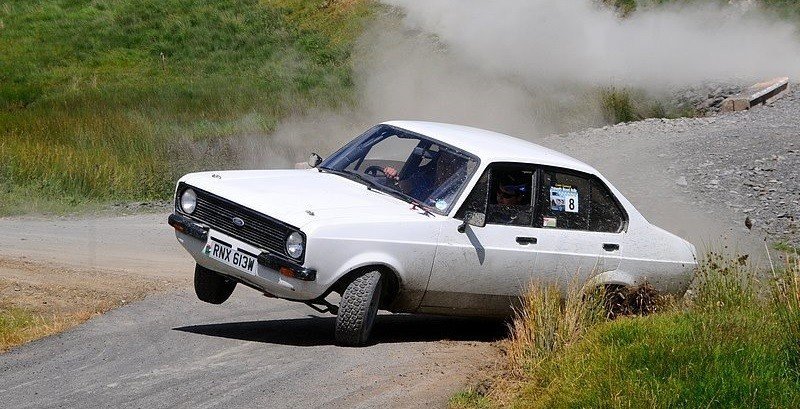 Aberystwyth & District’s Ystwyth road rally has always been on my list of events to do. It’s a unique event which uses the private roads around the Sweet Lamb rally complex. The event is run very similarly to a Targa rally with several ‘tests’ with neutral link roads between, just run under Road Rally regulations.

So this year was the year to head up and give it a go! So entry went in on the day of release with Dion Bee in the Violet Vauxhall Nova. Unfortunately for Dion car problems meant he had to pull out a week before the event so I gave Rhys Lewis in the Blue Nova a shout and we were all set.

Car 1 was off at 9:30 in the morning with the first loop starting down in the Sweet Lamb bowl, which gave a lot of the other crews a chance to watch everyone before they had to make a move. While we were watching a mishap happened with car 9, Jamie ‘Butch’ Wilson and Andrew Richardson, being guided up the wrong road between test 1 and 2 and missing the start of the second test, the neutral maps for the event weren’t the best so it was possible to go wrong in places. Loop 1 included 6 tests ranging from 0.75 to 3 miles in length. Again at the finish once you had parked up after MC2 you could watch the remaining cars come through to the finish of test 6. A mention has to go to David Neary and Phill Haynes in the Proton Satria GTi for their effort at the 90 right 90 left just before the finish. Opting for the grass option and flying over the 90 right, into the bank and then flying over the 90 left, great effort but did end their day early. If anyone has any pictures of it I would love to see them!

Some crews did experience a shower of heavy rain during the first couple tests while it was raining on one part of the rally complex. It was quite amusing to see some people on one test in coats getting soaking wet and 1 minute later kicking up dust next to a marshal in shorts, t-shirt and a dust mask.

Andy Davies & Michael Gilbey in the Impreza were leading after MC2 (end of the first loop) with a time of 14.56, just 1 second ahead of Lewis Morgan & Cadog Davies in the Mk2 Escort. Rounding off the top 3 was Rhodri Evans & Lee Taylor another 12 seconds behind. James Nicholls & David Allman were leading class 2 with a time of 16.42 in the Vauxhall Nova saloon with Carwyn Evans & Andrew Davies leading class 3 in their Impreza with 16.59.

Loop 2 was similar to the first loop mainly run backwards with a few changes and one different test all together. Test 9 had a tight hairpin left uphill which caught us out, but we were soon getting to grips with the layout of the event and having some fun!

Loop 3 saw 3 tests all between 2 and 3 miles with a lot of things changed to keep the drivers guessing. The tarmac section on test 13 was good fun with 2 tight gateways at the bottom to chuck the car sideways through. Also the jumps at the end of the test were run the opposite way from earlier on in the day so you could get the car up to more speed and get a bit of air time! All I could think of was the video on Youtube from Wales Rally GB a few years ago of the crews hitting the hole after the jump (link), luckily there wasn’t a hole for us but I did wonder while we were in mid air!

Morgan/Davies were still ontop with 44.12, just 9 seconds ahead of Davies/Gilbey going into the final test. Irfon Richards & Andrew Edwards had moved up into the third spot just 6 seconds behind second. Adams/Smith were still ontop of class 2 with 49.06 as well as Evans/Davies still leading class 3 on 51.45.

The final loop was just 1 test of several of the earlier tests added together to make a 4 mile loop. We decided to push hard as we were running 4th in class and thought we would try for that final podium position, but we tried too hard, both making a couple mistakes on the test which dropped us time and also dropped us back to 5th in class. It was a great final loop with some nice fast sections that were previously only neutrals. Also the large jump in the bowl was now used to get some more air time as Andrew Jones and Osian Pryce in the Mk2 Escort showed us!

Morgan/Davies were quickest through the final test giving them the well deserved win. An overshoot at a code board dropped time for Davies/Gilbey giving second spot to Richard/Edward, but both crews finished on 53.14. The class 2 win went to Adams/Smith after leading for most of the day, also managing a top 10 overall finish, well done!. Evans/Davies ran into problems on the last test picking up 3 fails and losing them the top spot, a very quick drive from Jamie Pearson & David Price in the Mk7 Toyota Celica gave them the victory almost 3 minutes ahead of second in class.

Well done to Lewis Morgan & Cadog Davies on the well deserved win. It was a close battle at the top all day between a few cars. Also well done and thank you from all the competitors to Philip Ralphs and his team from Aberystwyth & District MC for organising a top event. I will definitely be back one day, the event has a great atmosphere and seemed more about the enjoyment rather then chancing points!