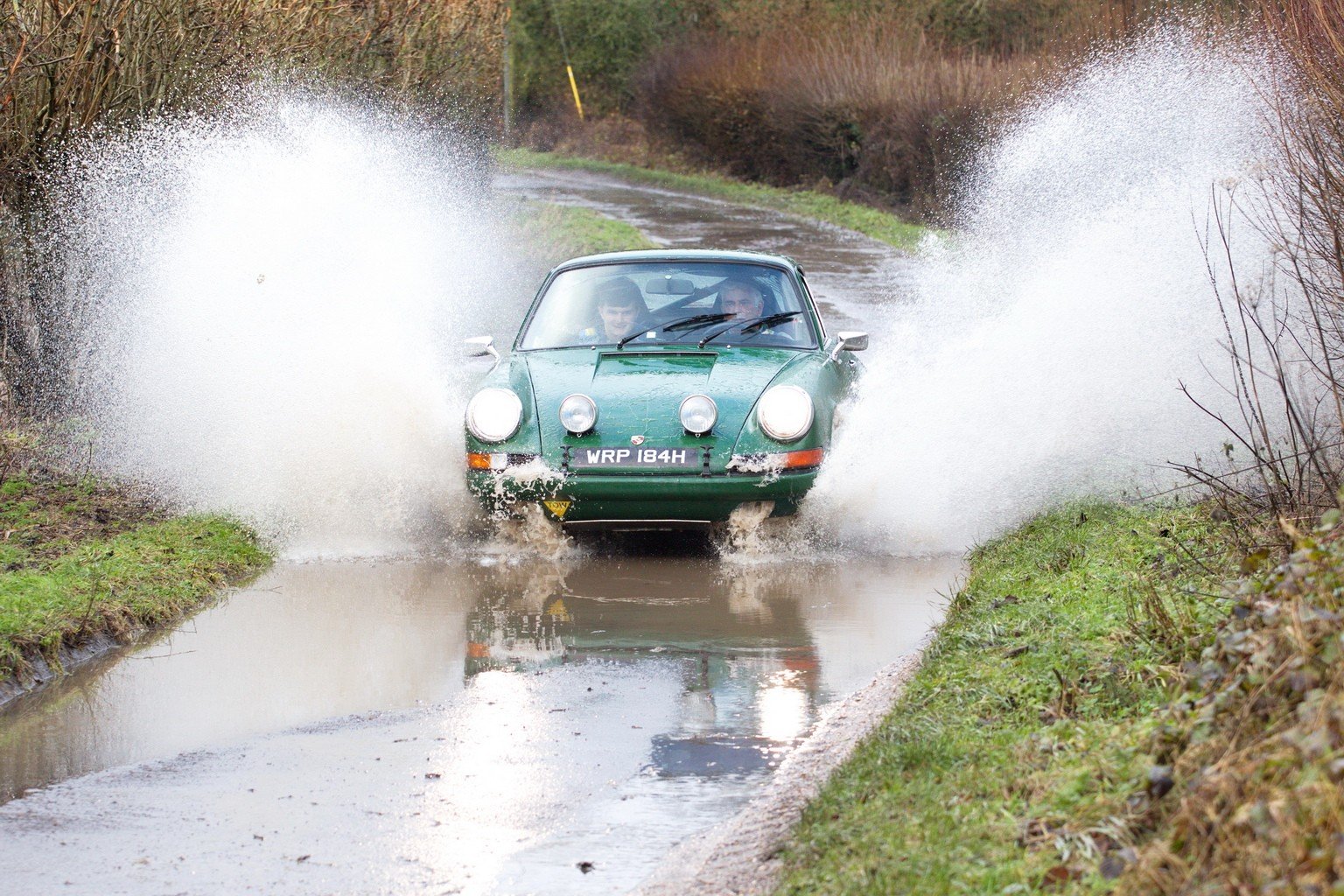 Having finished both the Throckmorton Challenge and Rally of the Tests in October and December last year the need to keep the adrenalin levels up was grabbed with both hands when the opportunity to enter the Winter Regularity Rally scheduled for Saturday 3rd January came about.
It was being advertised as an ideal rally for novices and would be slightly different in that it would start at lunch time and finish approximately 7 hours later in the evening. An event that could be accommodated within one day for most people.

For this event I had enlisted my Daughter Elinor Tutcher to navigate while I enjoyed the pleasure of driving my Mk 1 Mexico NUT 42M. Elinors experience on the maps was only one event old in that she sat next to me on the Throckmorton Challenge in October, however this events route was defined by a simple tulip road book. The Winter Classic Rally would be Plot and Bash with the main controls given out as soon as documentation was completed , up to 1 hour before the start. This event would test Eli’s resilience to the full as she has always stated that she would not be able to read maps on the move due to motion sickness! I didn’t tell her about the brown paper bags on the back seat!!

We set out from a very damp Somerset at 8 am and arrived in good time at the Railway Tavern in Hungerford on the way set the trip meter in the car to the measured mile designated by the organisers. We run Roamer Time and Roamer Time + trip meters in the car and find them very easy to set up.

Scrutineering completed we signed on and received the main control map references to plot. Eli set about plotting the information that sets out the backbone of the event. 30 minutes before our due start time we collected the detailed route information, Eli was expecting a tulip road book, what we received was 8 pages of route instructions described by Grid lines, spot heights, herring bones and 3 marked 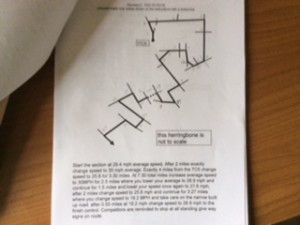 maps. Eli developed a headache at this point!!! We were surrounded by many more experienced ‘plotters’ so Eli used the knowledge pool and cemented a couple of new friendships as her plotting, in some cases was more accurate than theirs! It was only possible to plot the first 2 sheets before the off.

Our due start time was 12.15 pm , with rain still sheeting down we drove the short distance across Hungerford Common to TC2, the start of the first regularity. At the head of the field were Paul Crosby and Andy Pullen in a Porsche 911, they were favourites to win as Andy has been at the top of his game all last year. We were seeded 15th and ahead if us at 8 were the experienced crews of Tony Sheach navigated by Rachel Wakefield in the Triumph TR4 , at 12 was Bernard Northmore and Duncan Stonier in the beautifully prepared Healey 3000 at 14 John Griffiths & Rob Henchoz in the Volvo Amazon. Behind us at 16 was Chris Head and David Barwell in a very careworn but purposeful Dolomite Sprint followed by Barry and Paul Marsh at 17 in the beautiful Triumph Vitesse.

The route took us south towards East Woodhay on OS Map 174 via a long way round triangle, to find the hidden control. At our first timing point we were 1 second early, we were in equal 4th place! From here we headed for Old Burghclere via the narrow lanes, arriving at TC5 14 seconds to the deficit which put us down to 10th overall, not as easy as it seems! The next section of the route was described by a twisted herringbone. Eli sorted this section very efficiently even to the point of spotting a mistake on the route instructions. We were doing well, the route headed west on OS Map 185 using all the twisty lanes north of Whitchurch and on to Huntsbourne Tarrant via Dunley and Binley. Although we dropped quite a bit of time on this section, as did those around us.

From here we ran north of Andover via Hampshire Gate then south to Weyhill onto OS Map 184, at this point we were getting closer to the meat of the event that is Salisbury Plain.

Once the map change was negotiated we headed south to Luggershal and into Amesbury to the Antrobus Hotel for the meal halt. At the halfway point we were lying 10th overall and 3rd in class on 238 penalties. Chris Head in the Dolly was lying 5th, and Rob Henchoz in the Volvo 7th. We were ahead of Tony Sheach in the TR4 who was I think lying 12th at this stage. Bernard Northmore was having a nightmare having missed 3 controls but the Vitesse was very close to us. We had made a couple of errors but had realised in time before too much damage was done. Things were going fairly well.

In the first half the roads were awash with water with many deep puddles and a great deal of mud on the road. Tyre selection was critical, the Mexico was sitting pretty on a set of new Maxsport Mud and Snow tyres which were more than capable of handling these conditions however, with Salisbury Plain beckoning they would be tested to the full.

An hour later we set off north over the A303 to Larkhill and Durrington to head onto Salisbury plain.
The two marked maps designated the route with a series of wey points with instructions. In daylight it would be fairly easy but at night it was a different matter. The roads on Salisbury plain are a mixture of gravel interspersed with Tarmac sections, the main difficulty is that often there are three roads running side by side, again accurate navigation is critical as the route often crossed over or looped back. Timings was at 30mph but in reality this is hard to achieve on the loose surface. The LSD earned it’s keep on these sections and I have to admit this was the highlight of the event for me. Eli was almost flawless on these sections although she was not sure at the time. We were fighting and swapping places on the road with the Triumph Dolomite of Chris Head and David Barwell and the Triumph Vitesse of Barry and Paul Marsh. We did miss one control on a hidden triangle and one wrong approach which cost us 300 penalties but others were having the same issues. At one point at the end of the second marked map there was 6 cars convoy, albeit travelling at speed as we had all made the same mistake.

At one cross roads cars were seen to go every which way! We arrived and my instruction from Eli was clear, straight on, we took it at speed . At the cross roads was the Vitesse deciding which way to go and a little further on the Dolomite had wrong slotted into a very muddy track. We saw the correct turn and picked up the control point before the others could recover. A little further on was a series of turnings, we overshot by about 200 yds, returned to regaining the correct route picking up a control 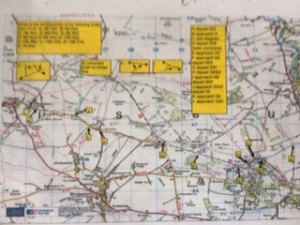 board on the way and almost met the Vitesse head on. Slotting left up to the next control the Vitesse followed but missed the control board in their haste to chase us. We later learned that on the next section the Vitesse took a wrong turn and became beached. The Healey of Bernard Northmore would suffer the same fate. Both failed to finish. Two down!! We also learned that Rob Henchoz had been penalised for stopping insight of a control, several other crews were similarly penalised. All we had to do was to keep it tidy.

Exiting Salisbury plain military roads towards the north the route instruction reverted to a mix of spot heights and grid references via at least one unmarked permissive byway, as this did not appear on the map it required good plotting and a degree of skill to select the correct route. Others fell foul here but Eli did not falter even when questioned by her Dad, are you sure!! She was right, of course, as we cruised into the control at the end of this section.

The final regularity was described by Tulip diagrams but without the direction of approach indicated other than the way the tulip was presented on the page. There were a number of long way round triangles which caught out a few. We had a few issues on this section as Eli had misread an earlier instruction and started reading the tulips from the wrong point. We were passed by three cars until Eli corrected her mistake, this gave me a further opportunity to put metal to the floor and try to recoup the lost time before the next control. Great fun and very satisfying when we reached the last control losing only 6 seconds in the process. What we didn’t know was that going into this section we were ahead of Rob by some margin but 49 seconds adrift of Tony Sheach in the TR, when we checked the results later we discovered that the had collected 60 penalties on the last section to our 6 and we beat them by only 25 seconds.

Back to the finish the results were very speedily calculated and made final within 30 minutes. Paul Crosby and Andy Pullen, the event favourites were announced as deserved winners on lower penalties than we accrued in the first half! We eventually finished a very creditable 8th overall and 2nd in class behind the Dolomite of Head/Bardwell in 5th. The TR4 of Sheach/Wakefield was 9th with the Volvo of Griffiths/Henchoz 10th.

The Winter Classic Rally was a well run season opener and a credit to Roger Hunt and VCCR and we would recommend this type of event to anyone who has tried the touring events. These events are low cost and are not car breakers, however, they are, it has to be said, not for the Show Car.

By the way does anyone need some brown paper bags, needless to say they weren’t needed!!!
Well done Eli.

And finally, thanks to all those marshals who turned out in the pouring rain. Without you guys we wouldn’t have this much fun.

Thanks to Tony Large (www.tonylarge.net) for all of the photos! Make sure you head to his site for more examples and for details on how to purchase yourself a copy.