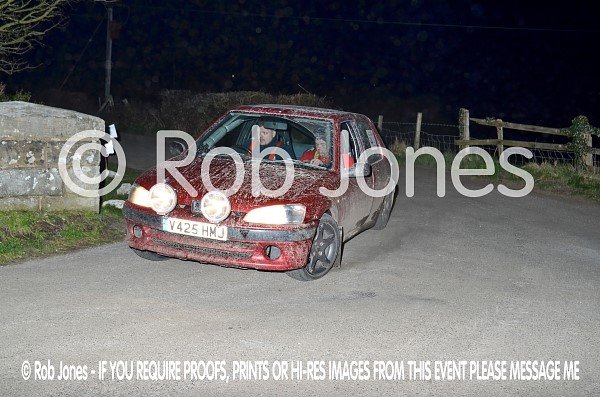 First off, I’ve never had to do a review before, about anything! So here goes!

Regulations firstly went out for three classes – Semi-Expert, Novice and Beginners, but after just one week of of being open entries were full. It was apparent that a lot of novice and beginner crews had entered meaning Clerk of the Course, Paul Morris, soon made the amended for Novices and Beginners only. Everyone was looking forward to it and it’s very nice to see some new “fresh blood” coming to the sport, hopefully it might help towards the shortage of navigators available recently!

A week before the event I was paired up with Tomos Parry in his 106 GTi, we were so exited to do the rally that we turned up before noise and scrutineering had even opened! 5 minutes later we were greeted by the friendly face of Ian “noise”, this is also when we found that we were running as car 2. This set us quite a task as I normally set out on a rally to finish better than my seeded number!

We made our way to the start at Cartio Môn where there were some very nicely prepared rally cars on display on the kart track, an awesome venue for a rally to start! Soon I was in my office for the night, got myself sorted, but then moved quite quickly when I noticed the hog roast, it was lovely too! As it was such a cold night a cup of coffee went down well as well!

At 21:30 we had a well thought out competitors’ briefing by Paul and deputy Clerk of the Course Merfyn Williams. It was a good briefing with clear points and little hints of what we would see on the lanes during the night, and as well how we should treat the marshals of course!

For the first selective, we headed out towards Anglesey Airport, where the first of many marshals were bravely standing out in the freezing cold! Waiting for our minute, I started to describe the selective to Tomos, a tarmac white about a mile and a half long. The marshal counted down from 10 seconds – I knew here – there’s no going back! A lot of people had told me that Tomos is a very quick and tidy driver, but selective one wasn’t going well for us with a fuse for the interior light blowing! This was followed by a little late call by myself but Tomos was cool with it and we pushed on a little more to make up for it up to SF1. We dropped 24 secs but by then, Tomos and I had gotten to know each other a little and knew how to work together better. A quick job finding another fuse, fixed it and we plodded on to SS2.

This started just after Mynydd-y-Gof near LLanynghenedl. It looked to be a certain dropper with 5 PC’s and a TC, this was my favourite selective of the night!! Twisty, read nicely on the map and had a muddy white – what’s not to like?! When we entered the white Tomos told me this was the place to make up time for result – I told him to be careful in case he broke something on the car, but he did the same as every other driver I know… Flat out! I couldn’t hold the potti or the map steady, so got my head up and helped Tomos to read the road with him, but did I see the water splash? Did I hell!! Plenty of mud and water inside the car, thanks Tomos! Some impressive times on this selective, Tomos and I had dropped 13secs with Berwyn Evans/Mari Evans (Mk2 Escort) having dropped the same but unfortunately later went on to pick up a fail by booking in early, third fastest was Macauley Roberts/Kieran Williams (C2 VTS) on 29sec.

SS3 was the only selective of the night with a triangle, nice and simple hairpin left. Loads of eyes on the slot – it was nice to see so many spectators stood well clear of the road watching!

SS4 was one of the longest selective of the night with 8 PC’s, 2 TC’s and 7 Give Ways, a certain dropper! Came out of SF4 into Bethel and headed to Newborough car park where MC2 IN/OUT was. Parked up and had something to drink and a mars bar as there was no fuel halt on the event. Tomos and I decided to push a bit more on the second half to ensure we stayed in the same position.

Off we went and into SS5 which was a nice long selective and oh my god, that bridge!! I hope everyone got around there okay! It was a well needed caution over bridge into an immediate square left. This turned out to be the only selective of the second half that we would drop time on, coming into the TC dropping 8secs, mainly due to checking my times were correct before handing them over, one to learn for next time!

SS6, nice and clean through here, only a few hairy moments! And then onto SS7 which was the last selective of the night, a nice short one. It started off near Gwalchmai towards Trefor, everything again in their correct plotted place. We had a little moment on the square right near Bodwrog, I really thought we were binning it on the last section but true to form Tomos set up the car nicely and made it look effortless! We got to SF7 clean, shook Tomos’ hand and thanked him for the spin.

We headed off to MTC3 and scoffed down a well earn’t breakfast with everyone else all smiling and on a high.

Had a quick look at the results before we planned to head off home to find that we were leading by 01:58, Tomos and I were over the moon! With it being the first time together in a car and only the second rally Tomos had finished! Results soon went final and we collected our trophies and headed home for a sleep and awaited the dreaded “rally hangover”!

I would like to finish with a big thank you to everyone who took part in organising a great novice event, as well as all the marshals for braving the cold weather! To Cartio Môn and Kingsland Garage & Tyres for letting the rally use their premises! Tomos and I (and all the others I’m sure) are looking forward to next years’ rally already!

Thanks to Rob Jones (www.facebook.com/rob.jones) for all of the photos. Make sure you check out his page for more examples and for details on how to purchase yourself a copy!