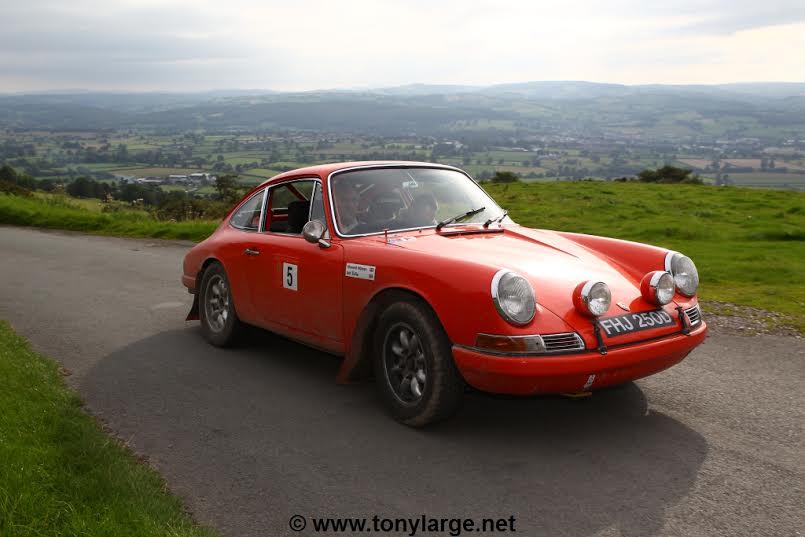 A quality field of 67 cars made the start of the 2014 Vale of Clwyd Classic based in the beautiful village of Llanferres, North Wales on Saturday. The event is now established as a round of the national Historic Rally Car Register Clubman’s Rally Championship, and as always, provided the entrants with one of the toughest events of the year.

A dull and drizzly morning saw competitors start to leave The Druid Inn just before 08:30 and make their

way to the first driving test at nearby Loggerheads, the gauntlet thrown down by Andrew Mallagh and Paul Harley as they set the fastest time of the day on this popular car park based section. From here, crews ran back into Llanferres to attempt the first regularity section of the day, Clerk of Course Guy Woodcock was up to his usual tricks and had many crews dropping penalties within the first mile with a cleverly placed turning into a fishery just after a road junction. This wasn’t the only devious slot on the first section, as further excursions onto private land along the route allowed time to be taken from the unwary.

Entering into Flintshire, two driving tests at the Penbedw Estate allowed the drivers to shine, for once though, an error was forced from Blackburn’s Steve Entwistle, a clipped cone costing him and Bob Hargreaves ten seconds, the damp grass based third test was proving tricky catching several crews out. A section over Moel Arthur saw a new venue used, a smooth forest section that dropped away from the main road which was tricky to spot with the foliage covering it. Up to the first card collect, past winners, Mark 1 Escort mounted Dermot Carnegie and Paul Bosdet were leading the event, the pair were under pressure from Cestrian Howard Warren who was partnered by Iain Tullie in their Porsche 911. Mallagh and Harley had problems here, dropping 43 seconds on a mid-point control, severely denting their chances of victory.

The late morning and early afternoon were test based, two forest tests held near the village of Cwm giving way to a run out to Bodelwyddan for a grass based test at local businessman Rikki Proffit’s home proving popular as ever. David and Jennie Aincham proved the star performers here, their Mini 1275 GT’s agility and great driving skills from David handing the husband and wife pairing a bottle of champagne donated by Rikki. It was a rewarding day for the pairing, as well as the Champagne, they picked up first in class despite having mechanical issues later in the day.

Regularity three was once again an exercise in precision; navigation was via coloured junctions and led the Vale of Clwyd Classic to one of the turning points of the event on regularity four. The route presentation for this was a one inch map with one of Woodcock’s favourite phrases included, ‘on this map’. Roads built since the map was first used caught many of the top competitors out, costing them a maximum 2 minutes 30 seconds penalty. Warren and Tullie got the tricky junction correct and this sent them into the lead as the event headed into Clocaenog Forest for a regularity section.

Starting off easily, regularity five went down a yellow that broke into gravel, almost as quickly it went back onto tarmac, confusing some crews. Following the road down, a narrow slot 90 right into Clocaenog brought competitors to the first timing point down from Bryn Du, heading back onto the road again, easy sight lines meant most crews kept good time until a switch back into the woods saw a long, fast straight passing Cefn Du, recently re-surfaced and slippy to keep crews on their toes. The challenge of Carnegie and Bosdet came to an end here, as a hairpin right junction with a slot before it caught them out. It wasn’t just them that fell foul as many turned in to early and missed it, some spotting their mistake and able to correct it before going on too far. The last tests.

The Fishy One heralded in regularity six, taking in the roads around Rhyd and Graigfechan, Gary

Edgington and Pete Johnson were the class of the field here, dropping just four seconds overall on the section. Ruddock and Pullan had a bad day at the office, the luck not just running their way, the Escort pair dropping 45 seconds at the first timing point on their way to seventh overall. However, it looks like Andy Pullan has clinched both the HRCR Championship and ANWCC championship subject to final confirmation, a superb result for a lad that had his 19th May.

The final section was once again designed to test the navigator, named ‘Short and relaxed’ the instruction was to drive over Bwlch Penbarras avoiding two spot heights. As ever, there was a catch in the organiser’s instructions with one of the spot heights being detached from its figure, the other blocking the road back to the finish, the only way out was a track that went down a white passing through a local’s back yard and across their field! Most crews were dialled in now and managed to find the route eventually, it seemed that most of the village of Maeshafn were out to wave the competitors on and back to the finish.

Once the results went final, it was clear that even after his admission that he hadn’t driven to his usual standards on the tests, Howard Warren and Iain Tullie had clinched a superb win after coming second on all of the last three runnings of the event. Speaking after the Vale of Clwyd Classic, it was clear that Howard relished the victory and said, “I think that this is one of the best rounds in the HRCR championship, all credit really has to go to the navigators on this event, it was Iain that made a vital decision that put us one step closer to the win during the course of the day, Clwyd Vale put on a superb mix of tests and regularities.” The win was made even sweeter for the Chester based businessman as his business partner Chas Colton took second overall partnered by the ever cheerful Ryan Pickering. In third were locals Pete Welch and Richard Bestwick, One of the drives of the day came from Clive Baty and Henry Carr in their Renault 5, finishing the day in 11th were pipped out of the top ten by just one second by David Morgan & Martyn Taylor, the diminutive Renault boasting just 1300cc and driven with Baty’s usual flair and exuberance.

The Vale of Clwyd Classic seems to go from strength to strength each year, the buzz around Llanferres was plain to see and hear as crews milled about prior and post event, it seems that the organisers have a real job on their hands to go better next year, but hearing the plans for the 2015 running from Guy Woodcock, it could possibly be quite epic.