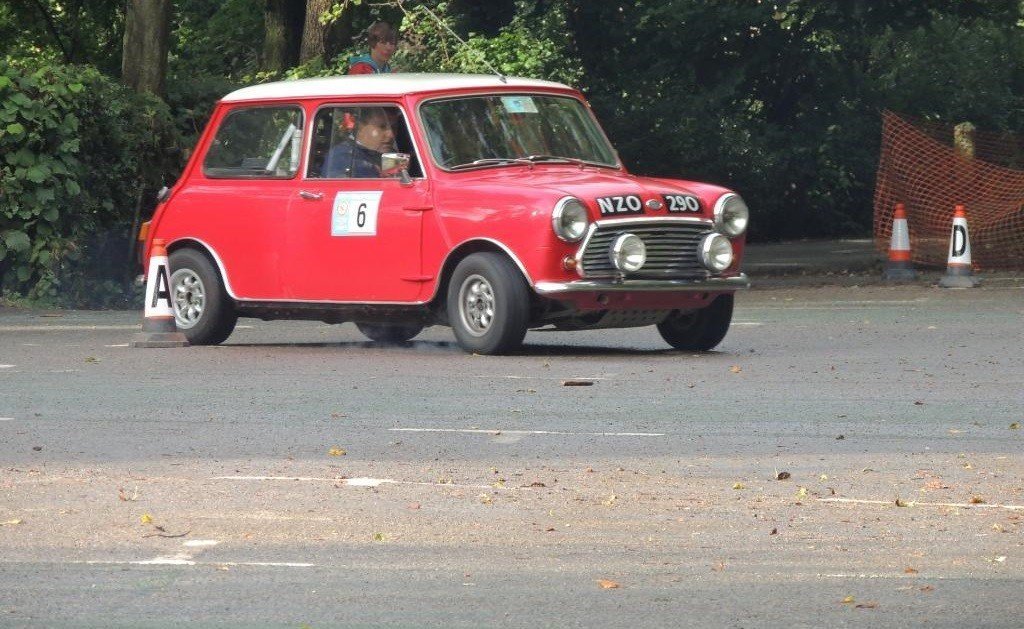 Proud of a couple of things today….1) My missus came to a rally with me and had a go with a clock and a timesheet, 2) she’s my best pal and my missus.

Before I get all soppy, can I remind crews who compete on (rally)events that us marshalls, as old and wrinkly, fat and ugly ( in my case!) as we are, without us, you get no events. To come into a control and start slapping your clipboard on the dash and bouncing up and down gets you nowhere.  We are told to do stuff a certain way, and until advised by a senior official, that is the modus operandi. Don’t forget either that we have probably been where you have many times before.And to the sixty odd other crews that had massive smiles on your faces, thanked us and made us laugh with you, THANK YOU.. It is you that makes standing out in the cold and wet worthwhile.

Today was a trip back for me, back to my last road rally in 1999 where I partnered Andy Sanderson on the Devils Own. Fair play, today was a different class, this was PROPER hard rallying. to see some major road rally navs flushed and under pressure was a bit daunting, after having a certain Cockermouth domiciled Scot jovially greet you at the first control, then to hear him grunt at you on your second control makes you realise that this was a proper event, But to see such a diverse and wonderful array of cars was a credit, from a full on MK1 Escort to an Austin A 90 with three in the car was truly spectacular.

Today was the now annual Vale of Clwyd Classic Rally. Now Clwyd Vale Motor Club have a couple of massive advantages over other clubs, they have map 116, and Guy Woodcock. Woodcock is probably better known than map 116, a larger than life personality who oozes confidence, he should do though as he lives within 116 and within a couple of hundred yards from the VOCC start and finish at The Druid Inn, he is a formidable personality who has ” seen most and done it” in rallying, his words, not mine, but the route Clwyd and he put on today proved that. I spoke with Rikki Proffitt after the event,having recently sold his beloved 2.4 911 Porsche and took up a Triumph Stag. Just to compete in this event.This is is a man who does not give back. He was full of admiration and trepidation at the same time, praising the classic world for its value for money, yet exciting motorsport, in the same breath the camaraderie and problems this part of rallying passes on. Rikki had a few words to say regarding historics. ” This event is fantastic, the roads and organisation are second to none, yet, I am wanting to see something to bring the novices on…” With this, I look at him and he measures his words carefully,, ” Too hard?” I ask? Rikki thinks long before answering.. “Maybe, but then again where do you get this level of organisation and competition at this price?” This is a real competitor who wants to see historics prosper. His reason for being out today was to be with his friend and navigator Peter Scott, the rapport and craic is immediately apparent, result unimportant for once for this avid competitor.

Bob Hargreaves partnered Steve Entwistle in the diminutive “Marigold ” coloured Mini, Hargreaves is an old friend and inspiration to me, along with Malcolm Grisdale in their old Subaru XT coupe, Bob has been a good mentor and friend. Again, I could see he was deep in concentration on the second half of the event, always quick with a quip, I asked how he was going on expecting a rapier like reply. ” Bloody Tough, turn right” were the only words I could get.. Same for Bosdet, last years winner, normally a smile and an exchange were met with a stern grimace and concentration. I bent Paul’s ear after the event over a pint.

”Go on Paul,” Says I, “what was it like..” “That has to be the worst rally of my life” came the reply. I nearly choke on my pint and look open mouthed at him.. “Eh???” was the only thing I could say as I could see by his expression he was serious, deadly serious. ” It’s the curse of car 1 with me, remember Geoff Hall and I drowning out on an MN event in the 80′s?” I nodded, as a lad, Hall and Bosdet were a top crew, their Mini became a little yacht bobbing down Winster ford one year yet with some careful brake swapping, it became the only event he has won as car 1 for the second year in a row. ” I hate running first, today was a nightmare, if we had a problem, whatever was there magnified itself, I couldn’t shake it off.. The route was amazing, but you know what caught people out? It was the organising team, their attention to detail was immense. Every single inch accounted for, whoever has won this today has done well, this is THE hardest event on the historic calendar.”

From Bosdet, that is a complement.

There were a lot of crews who struggled the first half, but as promised by Mr. Woodcock the event would be won in the second half, and it was, this is an event that continues to grow in popularity and stature, maybe ( or maybe not!) next year may be relaxed a little, one thing. when the results are announced finally, whoever has won can hold their heads up high after competing in the finest lanes this Island can offer and say, ” I’ve done it”… But will they come back next year to defend and win? I’m sure that Clwyd Vale will have some routes up their sleeve to try and allow someone else that privilege…

Thanks to Kev Haworth (www.facebook.com/kev.haworth) for all of the photos! Head over to their website for more photos and for contact details to buy yourself a copy!