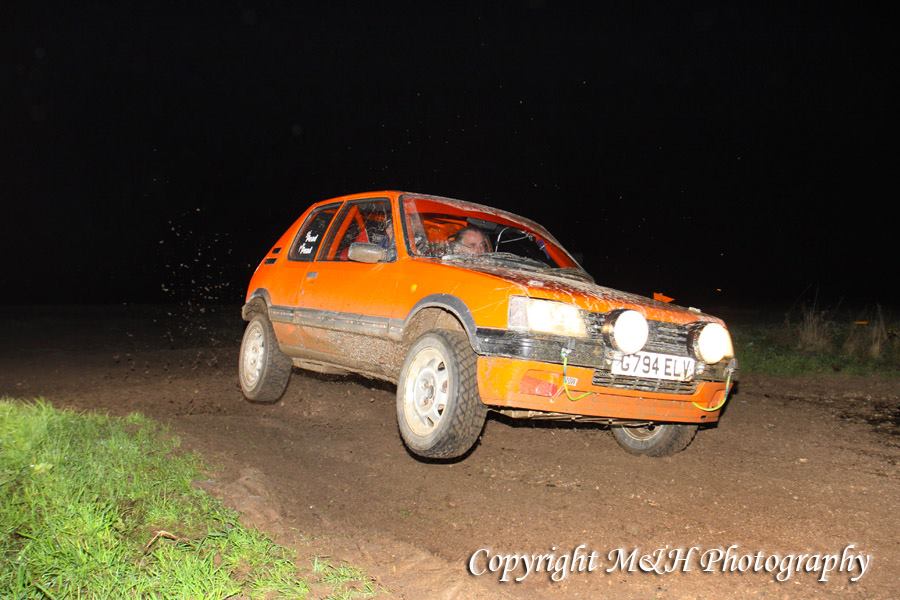 The perfect way to finish the year!

This year hasn’t been great for me event wise, it started off well with a great result on the Carvers Traders back in January, a good start for the ASWMC championship, but went downhill from there! & DNF’s in total, one of which we didn’t even make it out of the first grid square before having a fight with a tree! Some results were poor due to getting stuck in fields, drowning out in fords (in a ford!) so there has only been 4 or 5 events to really remember, and then comes along the Preston! The good old Preston to cheer me up and have a good en d to the year!

It was an early start from Swansea, meeting Jamie Jukes nearby to catch a lift over with him. Once we had picked up Ross Whittock (Jamies navigator) from near Bath we were on route to Thetford! After stopping off in a services near Stansted airport we soon me up with Edryd Evans & John Davies on the motorway and the banter started!

We arrived at the finish venue pretty early, beating most of the organising crew so we parked up in the wrong place, but it gave us time to get the cars ready and any unexpected problems sorted. We stopped down at the Bull next to the start venue for some food before heading off to get the cars and us through scrutineering. I was sat in with Andy Ritchie, my Preston driver! (Turning into a little custom!), he was running a little late but get to scrutineering in good time, after a few missed calls and worrying due to poor signal! Unfortunately for Chelmsford MC the ambulance station had building work going on so they couldn’t run the start as usual, but they coped well with the situation and soon everyone was leaving MTC1 and on their way!

And off we went into the darkness! Andy’s newly build BMW was feeling good and we were ready to tackle the event. A slight problem early on where the windows wouldn’t work, but we had to put up with it and just open the door, got used to it by the end! ‘Freckenham’ was to start this year just the other side of Worlington, a good first section which was fairly smooth and eased everyone in easily! Ian Ainsworth & Richard Hage (Proton Coupe) were quickest through here dropping 11 seconds with Jamie Jukes & Ross Whittock (ZR) dropping 14 and Ian Newton & Ian Jones (Escort Mk2) giving it a good go at the start dropping just 16 seconds.

A short neutral section then down to ‘Worlington’ which started just off the B1102, another one which wasn’t too bad, a few trees thrown in. A few crews were starting to drop off at this early point, 2 cars stuck in some mud after overshooting a 90 right, it gave us a bit of a helping hand to be honest as we could see exactly how far away the corner was! We were taking it easy in the BMW as it was newly built and hadn’t been through these type of conditions yet! We wanted to finish rather then break it early on! Simon Harrison & Paul Bosdet (Impreza 2WD) were quickest dropping 46 seconds, a very strong time! The semi-expert crew of Dave Parry & Ieuan Robertson (Civic) were second quickest dropping 1.22 and the novice crew of Dan Arthurton & Joe Massey (Micra) were third with 1.37, showing the event was open to any experience of crew! Ainsworth/Hage had hold of the lead still.

Next up was ‘Bay Farm’,I remembered this one from last year, a nice concrete section to start and it was flat down to the fence before the slot, so off we shot! Again we found another car, one of the 7 yellow MG ZR’s that were out on the event (Blame the Turners!) had overshot a 90 right and slid into a bushy hedge! Ainsworth/Hage, Paul Sharp & Paul Barrett (214) and Stefan Taylor & Joseph Pomfret (Proton Evo Coupe) all completed this section dropping just 1 second!

A very short road section then took crews to ‘Swales’, it’s amazing how the organising crew have found all these tracks so close together! (Sorry there’s not much detail about each section, it’s been a week now and I can’t remember which one was which!) Harrison/Bosdet set another quickest time with 4 seconds, Jukes/Whittock close behind with 9 and Taylor/Pomfret with another top time of 10 seconds dropped. Taylor/Pomfret were a novice crew running car 53 to note!

Next was ‘Herringswell’ where the current leaders Ainsworth/Hage had the quickest time of 54 seconds, just 1 second behind was John Davies & Stewart Merry (Astra) and another second on were Jamie Turner & Georgina Clark (ZR).

Onto ‘Park Farm’ the other side of Herringswell village, a few tight sections in this one between tree’s, I did wonder at one point if it was a track before the event or not! 4 time Preston winners Owen Turner & Andrew Dadswell (ZR) were quickest dropping 1.36. 2 seconds behind were Ainsworth/Hage and another second on from them were Harrison/Bosdet.

Back up the A11 this time to the first petrol halt of the night. A quick splash and dash at the petrol station opposite the star venue before heading north towards Brandon. The positions at first petrol were as follows;

So off from petrol up past RAF Lakenheath, got to say the road book was very well marked a clear enough, the zoomed in sections for villages was a good idea as well, perfect. We followed a couple other cars on the way to TTC18, they both wrong slotted in Faltwell but we were confident enough we we on the right route, soon we arrived and it was nice to see a quick blast up some tarmac to start the ‘Methwold’ section! Flat up the road and slot 90 left through a gap in the hedge (I remember parts on this one!) flat and slot 90 right at the end over rough stuff, 90 right again and back to the tarmac at the end, 90 right and flat back towards the start, slot 90 left and through some rough bits and then up to an old airfield, I remembered this one from last year, very quick! Having the marshals in high vis helped to judge distances as they were a little sketchy from the drawn maps! Seems like this one was easily cleanable with cars 1, 3, 4, 6, 7, 9, 10, 11, 13, 14, 17, 20, 21, 23, 24, 27, 33 & 37 all cleaning it! Conrad & Oliver Bos (ZR) were the quickest novices dropping 29 seconds in total.

‘Warren Lodge’ was next through all the trees near Cranwich Heath. Ainsworth/Hage were still in their leading form with a quickest time dropping just 3 seconds. Harrison/Bosdet were second quickest dropping 12 seconds with Turner/Dadswell dropping 18.

Onto ‘Didlington’ now which was just the other side of Didlington village, a longer section in the trees that also crossed the main A1065. Turner/Dadswell cleaned it with Jukes/Whittock dropping 4 seconds and Ainsworth/Hage dropping dropping 6.

‘Santon’ was next which started just outside of Brandon and ventured into Thetford Forest, another cleanable section with cars 1, 2, 3, 6, 7, 9, 14 & 15 all coming in on their allocated time.

A little drive this time up to ‘Wretham’, I say a little drive, it wasn’t far at all, but longer then most of the road sections! This one started and finished just next to each other, luckily a car was pulling out of the exit just down the road so we knew it was coming up soon! Jukes/Whittock were quickest again dropping 56 seconds, just 1 second in front of Harrison/Bosdet and another 2 seconds ahead of Turner/Clark.

‘Larkshall’ was just the other side of the A1075. Another close one with Turner/Clark being quickest by just 1 second ahead of Harrison/Bosdet and Davies/Merry 8 seconds behind them dropping 55 seconds.

Just ‘Croxton’ to get through now before the longer second petrol where we could chill out for a little! I was really getting tired by this point, maybe I should of had a sleep in the van on the journey up! Ainsworth/Hage were onto again dropping 24 seconds ahead, a good pace ahead of second quickest Jukes/Whittock with 52 seconds and Turner/Clark with 59.

Here are the current results at second petrol with the changes in brackets from the previous petrol;

Last third now! Time to step up the pace a little and see what this BMW can do. Yes we weren’t going to be the fastest but as long as we finished and had fun, we were happy, and we were both happy so far! Through Thetford and through the village of Rushford to head to ‘Euston’, hopefully we wouldn’t have a problem! 1, 3, 6, 14 & 27 were all on a mission after the final petrol, all cleaning the section! The route was starting to get a little rougher by this time and into the deep dark trees! This was a good thing though as a lot more cars were still going, not having things break early on! Smooth stuff at the start again next year please guys!

A short trip through Euston to get to ‘Fox Pin’ which was again cleaned by a few, cars 1, 2, 3, 6 & 14. Then down the A134 to ‘Ingham’ which was the second biggest dropper of the night.1.11 was the quickest time set by Ainsworth/Hage who were still on top form! 10 seconds behind were Turner/Clark who were getting quicker and quicker through the night, fighting back from 21st at the start of the night. Another 2 seconds behind was the brother(!) Turner/Dadswell.

A little section of 2 way traffic, which didn’t bother us as we were seeded near the back, and up to ‘Duke Ride’. This was also onto page 15 of the road book, the final page, the end was near! Even though it was near the end of the night several crews were still pushing, 1, 2, 6, 14, 42 & 46 all cleaned this section with current leaders Ainsworth/Hage having problems, dropping an almighty 25 minutes and 40 seconds! I’m not sure what the problem was but a devastating thing to happen so close to the end after leading for the whole night! This moved Turner/Clark up to the top spot, Jukes/Whittock having earlier problems moving them from 2nd overall to 4th and now back up to 3rd with Banham/Stimpson in the middle.

‘Summerpit Bottom’ was next on the edge of Thetford Forest Park, yet another one cleaned by several, 18 crews in total! And then up to the final section ‘Elveden’ in Elveden estate, a very long section through the forest, imagine a mini rough Finland WRC, several straights with just as many 90’s with the odd corner thrown in there for good measure! This was the big dropper of the night with Banham/Stimpson completing it in the quickest time, dropping 2.28. Second was Harrison/Bosdet 10 seconds behind and in third was Ainsworth/Hage dropping 2.56.

And that was it! A short trip back to the finish venue at Elveden Restaurant and it was all over! Another tough Preston but there were a lot more crews at the finish this time. Brilliant work from Andy Ritchie again all night keeping the car going, for a lot of it sideways, but mainly in the right direction! Really good fun! Thanks also goes to Chelmsford MC for putting on this unique event, so much work goes into it all and I’m sure there thinking about next years already! Well done to Jamie & Georgina who took the win, Jamies 18th Preston and first time winning! You could see he was over the moon! Well Deserved!

And that was it! Time to head back to South West Wales! Thanks to Jamie for doing all the driving! Hotel Transporter was brilliant! (Mattress in the back of the van!) It’s a long way to travel and now I’m saying I won’t go back next year, but I’m pretty sure I’ll be heading back again! It’s too good an event to miss and the perfect way to end the year!

Thanks to M&H Photography (www.mandh-photography.co.uk) for all of the photos! Make sure you head to their page for more examples and for details on how to purchase yourself a copy!