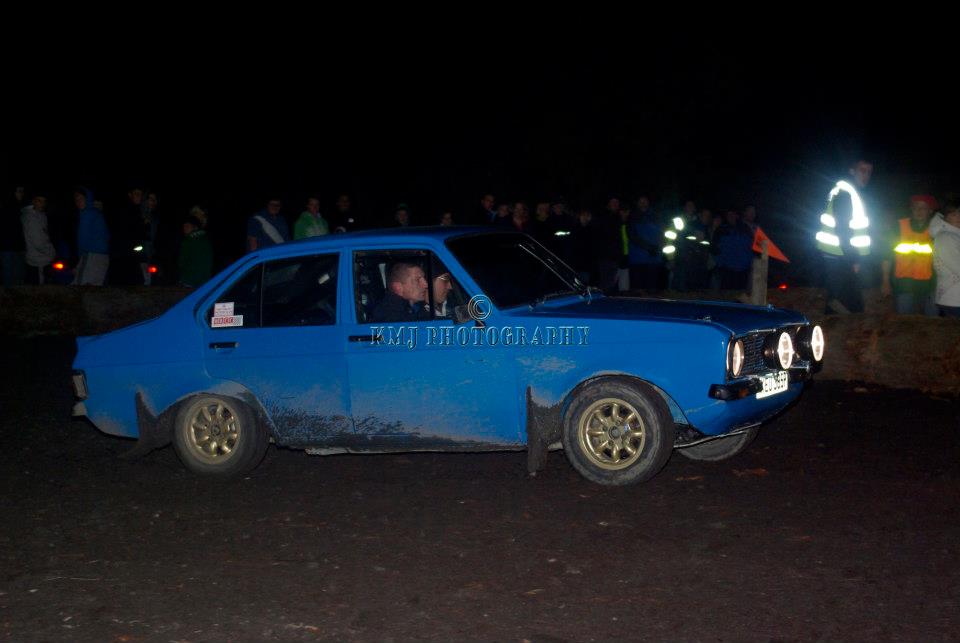 Bit of an adventure for us in Car 23 – going well in the first half. We supposedly booked in early to SF1, couldn’t see how as we were fairly slow on that one and only had a few seconds to spare reaching it. Anyway…

Flew through Mad Micks (2.26 run 1, 2.23 run 2) and we were motoring through the second half until we reached Gary’s own yard! Hit something (still don’t know what!) approaching the PC in the barn after the yard, heard a massive bang and Gary’s sister on the control told us what we guessed, flat! Tried limping on it but it wasn’t going to happen, so had to jump out in the next farm and do a speedy change. Lost about 4 or 5 minutes for that one.

Then, at the start of the next, we hopped out of the car for the necessary ‘splash and dash’, except Gary decided to leave his Specsavers on the roof! That selective became more of a Sunday cruise to prevent any projectile unpleasantness in the car.

Parked up before SS13 (the last one), and we decided there to sit back to let Gary grab some fresh air. After a few minutes and a poor hedge being covered in vomit, drove on and took the time 2 minutes before our OTL, figuring we could push hard enough not to actually go into it. Set quite a good time too!

Massive thanks to Gary for the spin, fair play when everything’s working that lad knows how to pedal! Definitely hoping for another spin together in the future. Thanks to all the marshals (I tried to thank all of them but I know there was one where I didn’t, being all flustered after what had happened!) Fair play to Mr Spiers and his team, that was by far the most challenging event I’ve ever done – cant wait to return next year.