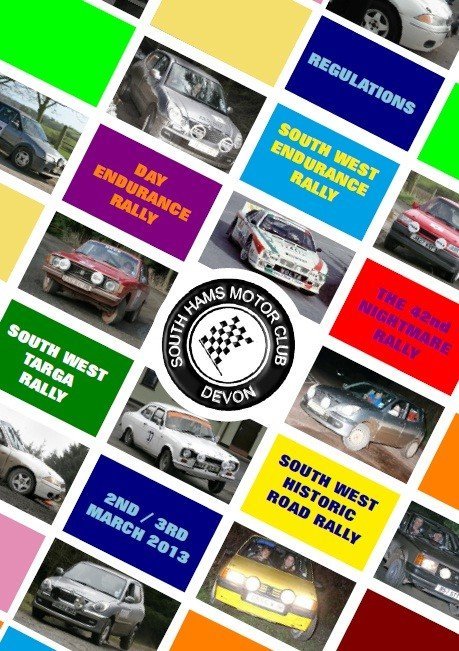 “Welcome to the fifth South West Endurance rally, which is scheduled to take place over the
weekend of 2nd / 3rd March 2013.

After a four year break, and constant questions from previous competitors about when it may return as they reminisce over their previous exploits, we have given in and brought it back, but with a difference or two! In fact there are 5 events running on the weekend.

The South West Endurance Rally is a one day rally starting at mid-day, covering in total around 300 miles over approximately 18 hours. There will be 24 selectifs of fine smooth forest tracks, followed by a 130 mile night rally, which forms a round of the Sportway Tyres Endurance Road Rally Championship.

The Day Endurance Rally is for those who do not like the night rally part, this rally is made up of just selectifs.

The Nightmare Rally – If you prefer just the night rally part, you can enter the Nightmare rally which is a round of the ASWMC Navigation Championship.

The event will be based at Badgers Holt on Dartmoor, where we have documentation, start, evening halt and breakfast with Prize Giving.

Our ultimate goal is for you all to have FUN.

We look forward to receiving your entry but if you are unable to enter the event please come along and marshal and we will make you very welcome what ever you decide.”