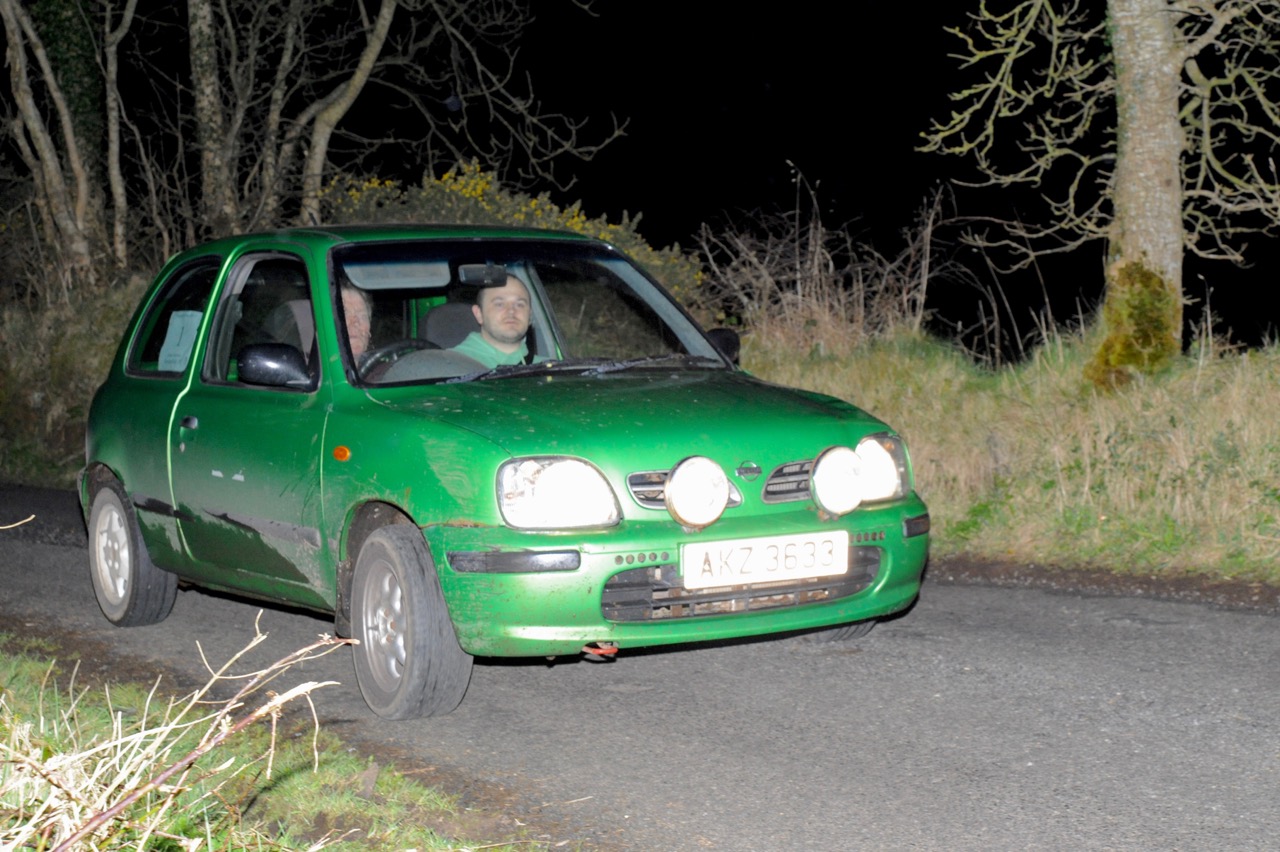 David Burns and Connor Murphy ran a perfect rally at the Hobson Electronics Snowdrop on Friday 10th. The challenge for every rally crew is to avoid penalties, and that is just what this beginner pair did in their Ford Fiesta. Zero penalties, and first place overall.

A fantastic entry of 29 crews made it on to the entry list, showing that the focus on beginners was the right thing for Dungannon Motor Club to do. After three years of rally navigator classes, 21 teams showed up as Beginners, making this one of the highest entries in a navigation rally for some time.

First car away from the Dungannon Rugby Club start was the Loughgall Father and Son team of John and Jonathan Henderson. Five crews were entered in the Experts class, pitting their wits against the organisers with plotting on-the-go, and some tricky instructions to follow. Behind the Hendersons came Husband and Wife Ciaran and Rachel Carey, keen supporters of navigation rallying in their Vauxhall Nova.

The Novice class had just three entries, made up of teams making the transition from beginner to the more demanding class. Stewartstown’s Sean Devlin, with John Nicholl navigating, was out again in his Toyota MR2, chasing William Strain and Robert Hall now in a Golf, and eventual class winners Andrew Hughes and Neil Anderson in a Mazda MX5.

The largest classes were the two for beginners; one for those who attended this year’s rally school, and the other for all other beginners. These crews all received a map with the full route in advance, although they had the opportunity to plot from the instructions as well. This makes life inside the car a little less complicated and allows more time for following the correct route at the correct speed.

The first section was easily handled by most crews with just a few getting caught with earliness penalties at the very first secret check. The next two sections saw the penalties start to accumulate, and by Time Check E, only the Hendersons and the beginner crew David Burns and Connor Murphy were still penalty free.

A short break allowed teams to catch their breath and prepare for the final two sections. Starting near Kilnaslee, the section ran to Altmore Forest, and then South to the finish near Happers Bridge. It was here that the Hendersons incurred their only penalty mark, and this left Burns and Murphy as the only “clean sheet” crew left.

The Careys were the only Expert crew to avoid penalties in these last two sections, a feat also achieved by Novices Andrew Hughes and Neil Anderson in their Mazda MX5. In Class 5, Kenny and Peter Anderson were also in their stride and were the only ones in that class to avoid penalty marks on the run in to the finish.

Dungannon’s Mark Stewart and Chris Hobson were unlucky not to finish when their MX5 stopped for no apparent reason, and spoiled their night’s fun.

A terrific event laid on with the Beginners in mind, but with enough challenge for Experts as well. Clerk of the Course Hayes Robinson, assisted by Keith Hall, had laid on a rally that everybody enjoyed. Quick results and awards presentation by sponsor Derek Hobson left teams hungry for more, so hopefully the return of navigation rallying is under way.

Thanks to Derek Smyth (www.facebook.com/smythdereki) for all of the photos. Make sure you check out his page for more examples and for details on how to purchase yourself a copy!