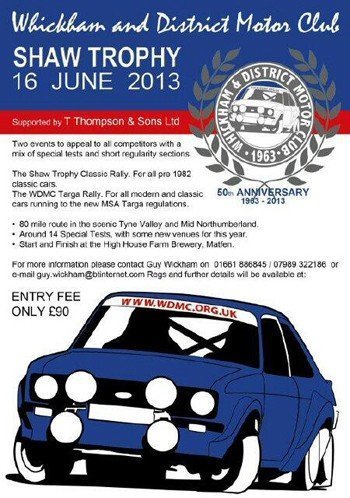 Ross Butterworth scored a dominant victory on Whickham & District Motor Club’s Shaw Trophy Rally, taking fastest time on 11 out of the 14 tests to come home a clear winner from the A-H Sprite of second placed Simon Parsons/ Jessica Dickson, whose challenge received an early setback with a maximum on only the second test.

Despite having a clear date in the competition calendar, the Shaw Trophy attracted a rather sparse entry of just 20 crews, possibly as a result of a dire lack of pre-event publicity. The format was enticing however, with some 14 tests, mostly located in farmyards and two regularities to keep the navigators happy.

The opening test at Northside Farm saw Neil and Norrie Campbell’s Mark 1 Escort set the early pace but Butter-worth soon got into his stride, quickest by a considerable margin at Whitchester where a hard charging Parsons/ Dickson understeered into a stout metal post, causing severe damage to the cars n/s wing, this on it’s first outing after a 12 month rebuild.

Butterorth was again quickest on the next test which preceded a regularity which started just off the A68 at Stag-shaw and meandered round the yellows past Ryal and Ingoe where the Gilbern Genie of Mike Smailes/ Bryan Smith fared best, losing just 4 seconds, Parsons/Dickson were on 9 and Stuart Bankier. David Alexander (MG Midget) on 14.

A tricky test at South Bradford saw the Campbells head Parsons and the BMW 2002 of Neil Morrison/ Tom Douglas while Bankier/ Alexander posted the events first retirement when a half-shaft sheared . The rally moved on to Beech-field, scene of no fewer than four of the events tests. Parsons/ Dickson flew over the first one to redress some of the damage caused on test two, while Butterworth took the next two to head for lunch with almost a full minutes lead over Morrison/ Douglas with Parsons/ Dickson pulling back up to third place. Sadly the Campbell’s long journey down from Pitlochry proved to be a fruitless trip when their Escorts clutch cable snapped, without a spare they re-tired while lying 5th and in contention for a podium place.

The afternoon session was dominated by Butterworth, who was to be quickest on all of the remaining seven tests, the tight nature of some of them proving to be no handicap to the Escort driver. A second regularity which ran from Bolam to Hartburn saw the SAAB 96 of David Heirs/ Richard Welsh drop just 3 seconds, Butterworth was on 4 and Parsons / Dickson and Sally-Ann Hewitt/ Mark Lewis ( Mini Cooper) just behind on 5. Butterworth was again quick-est round the two tight tests at Meldon Grain Silos where there were a wrong test saw the Lancia Fulvia of Nicholas and Judith Grasse drop back down , while Morrison/ Douglas saw a podium position disappear with a maximum on the penultimate test.

An enjoyable event with a popular format, which all the competitors enjoyed the Shaw Trophy deserves a much larger entry and then organisers would do well to copy the effort some other events put into publicising their events.