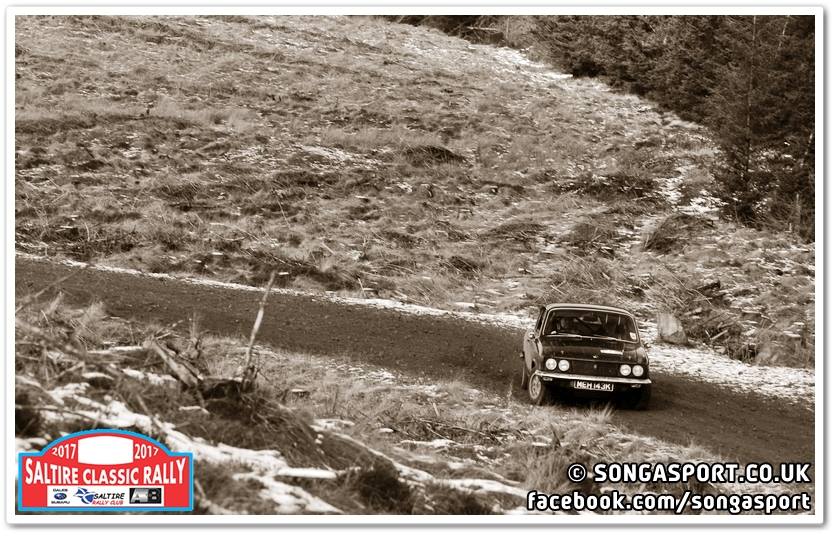 Round 2 of the NESCRO Challenge – and after doing and winning the first round as a guest appearance in a Mini, it was back to my normal seat for most of 2017 in one of the most unlikely rally cars on the circuit, the Sunbeam Rapier H120 of Andy Beaumont.

Me and Andy have competed on and off since 2009, starting off in his rapid RS2000 and since 2013 in the Rapier – which started off as a bit of a challenge for the Rally of the Tests as a change from the Escort which needed work. It’s since developed into a very serious bit of kit, with over twice the power it started with back then.

Anyway – Andy picked me up at the end of my street, I didn’t look at the car – but after about an hour I looked in the wing mirror and thought I could see a ratchet strap flapping about as I could see orange. “Is that a lose strap?” – “oh – you’ve noticed the wheels then?”. He’d had a set of Minilites from the Escort done in Gulf orange to complement the green body work. More of that later, as it was a source of many comments all weekend.

The Saltire is a firm favourite on the NESCRO calendar as it has a bit of everything – usually 3 or 4 regularities (some in the forests), around 18 tests at some great venues and it’s usually sponsored by a distillery which means lots of whiskey.

We arrived in Pitlochry just after lunch on the Saturday, so plenty of time to set the trip meter up, have something to eat and have a poke around the other cars and have a chat to everyone. Lots of comments about those wheels. In the historic, main competition were Ross Butterworth (event sponsor) and Ali Procter, last year’s winners in the MkI Mexico and my seat from last year, John Bertrum in another MkI Mexico, who was 2nd last year, with the very experienced, but relatively new to historic regularity, Stew Merry.

Most of the route was already on the map – so come Sunday morning at was all ready after documentation. Cars seemed to be arriving with a decent dusting of snow and you could see the white stuff on the tops of the hills – where we were going.

The cars were seeded with the Targa cars first, then in class order, so Ross/Ali were off car 27, we were off 33, and Bertie/Merry at 36 – so in theory we could have an idea how half the main competition was doing all day.

Unfortunately, test 1 at Edradour Distilary was cancelled, so we had a run around the back of Pitlockery to test 2, “Peter’s” which is a blast through a farm yard, around the buildings and then down through a series of hairpins on the loose to the finish. It usually runs up the hill, so we probably came into the last hairpin a bit quicker than usual which made for a great photo as there was a lot of pulling of the anti-understeer lever to save the day as we were on road tyres.

3 more tests, 2 in the council yard just outside Blair Atholl Estate, we seemed to be on the pace and then onto regularity 1, which started in the private grounds of the Blair Atholl Estate. The first section included a not as map cross roads and a trip through a car park that also isn’t as map (that has caught people out before), this year we turned left through the estate roads rather than right and across the runway to the main road. The first control was on the private land, then onto the main road and a run around the top of Tummel Forrest, around a NAM triangle and down to the finish just north of Kinloch Rannoch – another test, then another regularity starting before the loch, through the town in a large triangle and then along the southern side of Dunalistair Water.

There was a bit of a panic when, after doing a good few miles, around a large triangle and approaching the finish, we hadn’t seen a control – started thinking I’d miss-plotted the route, gone the wrong way around the triangle, or drove straight past it. Then started thinking the control was just before private land, so the 2nd control could be a short distance up the private drive.

Still nothing – got the test start and the marshal had a clock and was also the finish marshal. Panic stations – where did he time us to? Where was the other control on the time card (there were 2 marked on the card)? “Oh – sorry, only one control, the marshal didn’t turn up”

Phew – great relief and even greater when we saw the results that we’d got a zero for the whole section.

Another couple of snowy tests, with very tight free turns at the end (didn’t really look at the 2nd one, but we’d been told nobody so far had got around in one go, and we were totally committed and somehow got the big car around in one go) – we arrived at lunch at the caravan park, with everyone watching we took 5 secs out of Ross and 4 out of Bertie.

Saw Ali at lunch – “well, how’s it going?” – “OK, but have missed a code board – but so have you, so it makes no difference”. Seems almost half the field missed a board on a loop over the top of the hill to get you to Killiecrankie, a road we’ve been over loads of time – we definitely didn’t see it, could have been where we saw a car crashed into the scenery.

It seemed we had a 35 sec lead in the historics, and 15 o/a from the Targa cars. Most of the front runners had also missed the same board, so even if it did get scrapped it made no difference.

We had a bit of a team chat over lunch – 9 more tests and 2 regularities, it was ours to give away. Decided to try and not do anything stupid in the afternoon, which if you know Andy, isn’t really his style – so, 2nd run around the caravan park, he went and set fastest time taking time out of both the Escorts again.

The rest of the afternoons tests were relatively uneventful – regularity 3 seemed fine with minimal time dropped.

Regularity 4 was in the forest, but due to the snow and muddy conditions, they’d dropped the average speed for safety. We arrived at the first intermediate control (the lads from Berwick & DMC), who said “oh – you’re a second late” – I swore a bit, then they said “but Ali was 24 secs early”, so we thought we’d probably done enough at that point.

But on test 17, the next test we spun and dropped 22 secs to Ross/Ali. But, they didn’t know this and they also didn’t know that they’d been taking time out of us in small chunks on most of the afternoon tests, so it was actually, unknown to all of us, very close.

Got to the finish, even stopped for a splash and dash to make sure we didn’t run out of fuel on the run in – still no idea what was going on. Saw Ali, sat down and compared ideal times for the regularities in the afternoon (0 vs 1 on reg 3,) then on reg 4, 1 to me, 24 to him and then the words “gave up” on the last 3 controls and big penalties on the final few controls.

We were really pleased as this has been a bit of a bogie event, throwing it away with various things with Andy and finishing 2nd a few times with John. We also think it could be the first time a H120 has ever won a rally, which has to be an achievement as they’re not the obvious choice for a competition car. In the words of Ross at lunch when he saw the times, “****, that thing mist be fit now”.

Also pleasing was to win the regularities – it was a dead heat last year, went down to furthest, cleanest which Ali got by 1 second at the first control of the day.

The Saltire is always a well organised event, as they always say, ran by competitors for competitors and it is what people want – great tests for the drivers and sensible regularities for the navigators, that are a challenge, but don’t mean the drivers falling asleep.

Roll on round 3, The Berwick at the end of April – another cracking event, 2 days of some of the best tests in the country and 7 regularities in a beautiful part of the country crossing from Northumberland into Scotland – just a small matter of a trip to Catalonia for the Rally Costa Brava Històric the week before and a bash at European FIA regularity in what is in effect a full on stage Toyota Celica with John Proctor, which seems very different to what we do here in the UK.

Thanks to Frank Love (www.raceandrally.co.uk) & Songasport Rally Media (www.facebook.com/Songasport) for all of the photos. Make sure you check out their pages for more examples and for details on how to purchase yourself a copy!