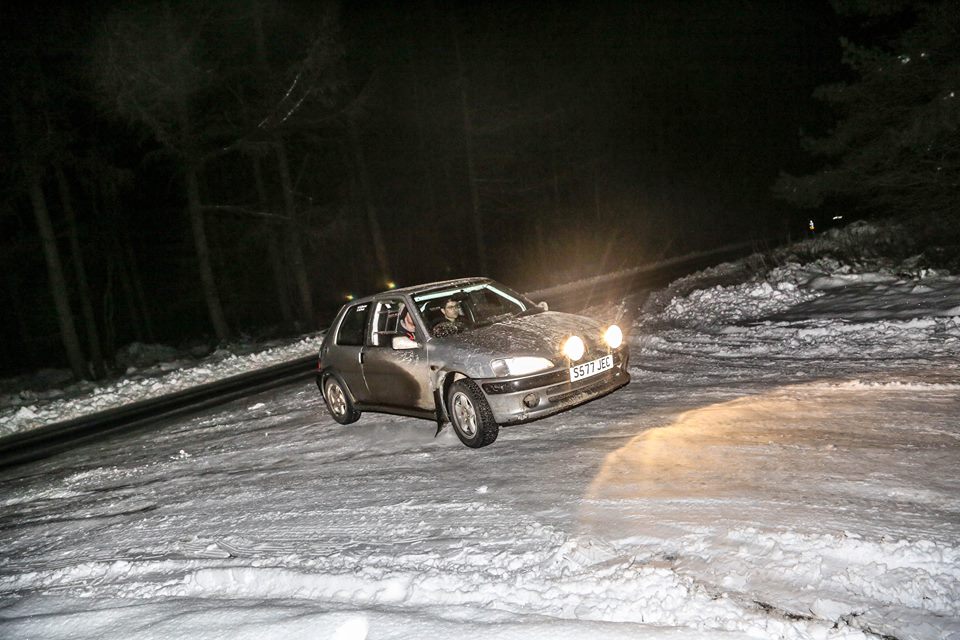 The traditional opening round saw crews congregate in Malton for the Malton Laster Ryemoor Trophy on 20th/21st January. A small but strong field were present with all winning crews back to 2013 represented. Hot favorites were Richard Hemingway and Sam Collis who were coming off the back of an incredible 2017 campaign, which saw them outright win 4 events.

Clerk of the course Sam Spencer had refreshed the format and the event started with 6 tests on military land followed by the traditional plot and bash on the road sections. A recent cold spell had left much of the course covered in ice with deep snow on higher sections and the ground at the first tests was freezing as competitors attacked them. Leading out of the tests were Bevan Blacker and Niall Frost who took an early 33s lead from Heminway/Collis. Several crews got into trouble with Seddy Sedgwick and Sam Ambler showing the spirit of Road Rallying by towing the newly prepared Proton of Stuart Newby and Russell Waller out of a field.

Onto the road and the conditions were such that just staying on the tar was a challenge. Novice crew Neil Paylor and James Greenhough set the pace dropping 1min for the first section and they would go on to finish a highly credible 3rd overall. However it was Stan Featherstone and Sasha Heriot who were on a charge after losing their exhaust twice on the tests, they were pushing and found themselves up to 3rd at Petrol. Sadly a few crews called it a day before the end of the first half with previous winners Hemingway/Collis and Green/Gibbins struggling with tyres and taking an early bath.

The second half started with a tricky herringbone featuring all roads with Blacker/Frost and Featherstone/Heriot tying on 2mins before the route wound it’s way up to Cockayne, a classic Ryemoor road but not covered in thick ice or littered with snow covered NAMs with many crews dropping time instead of risking missing boards and a 5min penalty. Another previous winner ended their charge here, Richard Hunter and Gary Evans struggled to extricate themselves from a snow filled triangle and dropped out.

The leaderboard was still fluid and Newby/Waller were on a charge and overhauled several crews after losing 7mins in the tests to finish 4th overall. Matt Flynn and Rob Bryn had an unfortunate wrong slot, which dropped them down along with Sedgwick/Ambler, both crews still maintaining a top 10 finish.

At the end it was Blacker/Frost who got the result, and their first overall win, ahead of Featherstone/Heriot with the drive of the day by Novice crew Paylor/Greenhough taking 3rd. Special mention must go to James Taylor and Ian Graham who finished the event for the first time in 5 attempts.

The 2nd round takes place in Lincolnshire with the Vauxcare Bruce Robinson Rally on 10th February with Clerk of the course Matt Wood delivering off-road tests and a plot and bash road rally.

Thanks to Matthew Rudd Photography (www.matthewruddphotography.co.uk) for the photos. Make sure you check out his page for more examples and for details on how to purchase yourself a copy!