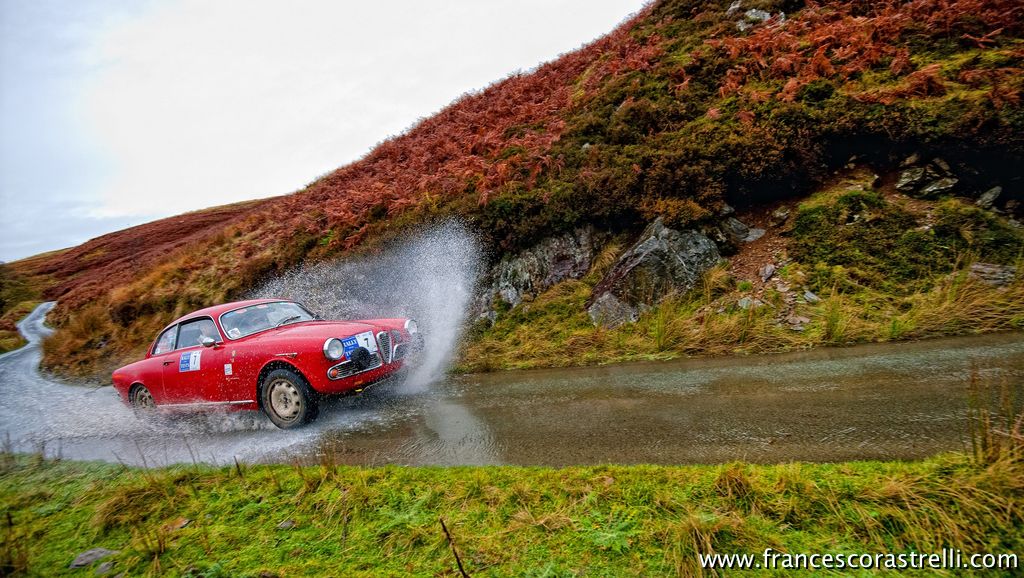 I’m 46, I have been involved with motorsport most of my life, from being 12 and falling off my first trials bike, I’ve been a complete petrol head. I got into rallying at 17, my first ride being on the Lightning Trophy Rally with Brian Hall in a Mini, we finished, unbelievably, 18th overall despite missing a large amount of controls.. Beginners luck.

My rallying days are rose tinted, they are full of MK1 Escorts, Sunbeams and Mini’s, these were the stuff of dreams, and nowadays they are reality once again. Without going in to too much waffle, I have recently re-joined the sport after a large lay off. Earlier this year I volunteered to help out on Clwyd Vale Motor Club’s “Vale of Clwyd Classic”, which is run by Guy Woodcock as Clerk of Course. I was immediately impressed by the smooth running and complete enthusiasm which surrounded this event; alongside this rally I volunteered for “ROTT” as a marshal, with the reputation of VOCC in mind. Guy seemed to warm to my enthusiasm, I soon became part of the route checkers, albeit the new boy who was unknown again, but I did have a tiny degree of success in historic road events. I PR’d a section of the “Tests” route, even my partner became involved. She loved it funnily enough.

And so the prologue arrived, it seemed most of the crews were expecting a gentle bimble around north Wales to ease them into things. Wrong! Many crews were revelling in the atmosphere of the event, and the superb hospitality it offers. The base for the prologue was the very well appointed Doubletree Hilton at Hoole in Chester. It was here that a total of 81 competitors made the start, regrettably, ‘Tests stalwarts Robin Eyre-Maunsell and Peter Scott didn’t make it due to axle maladies. Parts of route were handed down and proceedings got underway from the Plas Hafod hotel, in the village of Gwernymynydd. Straight away competitors were shown that this was no walk in the park, steady rainfall had swollen the first real obstacle, a ford just one mile away from the start of this regularity. Crews passed through Loggerheads, over Mercwys Mountain and ended the first regularity north west of Eryrys. Straight out of the blocks, last years winners, Paul Wignall/Mark Appleton were stamping their mark, they were followed by Neil Wilson/ Matthew Vokes 6 seconds adrift, chasing them were Keith Davis and Rick Bestwick. The second section “Clwydian Way” was a virtual run on from the first leg. It was here the skill of Clerks of the course started to manifest. Crews were presented the route on a sheet recreated from a re-scaled 1961 edition map, and this seemed to swap things on their head.  Kevin Haselden/Matt Fowle were the top crew here, followed by Jan Ebus/Iain Tullie, however another consistent section by Wilson/Vokes saw them in the hunt. The final regularity of the night was Flintshire hills, this was the sting in the tail that Guy Woodcock had promised, several tricky to navigate ‘not as map’ roads were used, many crews falling foul of this on this short section.  Andy Beaumont/Andrew Fish were top of the pile here, followed by Wilson/Vokes and Geert Van de Velde and Peter Jan Smit. The road back to the luxurious Doubletree had a test in store by the name of ‘Down on the Farm’ where the drivers were allowed to flex their muscles. It seemed this tight little test suited the smaller cars, with Haselden/Fowle on top, followed by the similar Cooper S of Duncan Wild/Lorna Harrison. Third on this test went to Beaumont/Fish with a superb run in their larger Rapier. And so the first nights competition came to a close as crews arrived back at the hotel, many were seen deep in conversation as the meticulous planning of Guy Woodcock/ Anthony Preston was now apparent. Their knowledge of the roads and maps in this vicinity proving invaluable in taking time off all crews, the presentation of the route being described as “World Class” by many seasoned campaigners.

that suited the more powerful cars. From here the rally headed south west, skirting Chester and first taking in local roads around Halkyn, and then heading for the first “real” challenge in Clocaenog Forest.

The presentation of the route was in differing forms, from the old descriptive style of early RAC rallies to “As you see it” sections, all designed to keep the navigators on their toes. From Clocaenog, it was on to Trawsfynydd via Festiniog, the event making use of the military roads on the ranges before heading back into England via Lake Vyrnwy and the Tanat Valley. On the run to Stoke, competitors were treated to tests at Rednal Kart Circuit and an evening section on the now mythical Swynnerton Army Ranges. Worthy of mention here are the pairing of the events furthest travelled competitor, Canadian Branko Brkovitch, who was partnered by the not as travelled Nick Bloxham. The pair had gearbox troubles on Trawsfynydd and had to sit for an hour.. The old Bloxham magic was around as the gearbox “cured” itself and the crew managed to not only get to the end of the day, but finish the event.

So at the end of day 2, Chester to Stoke, Jan Ebus/Iain Tullie were starting to pull out a lead from Neil Wilson/Matt Vokes making it a Porsche 1-2. In third were Wignall/Appleton in their beautiful Alfa Romeo, Ryan Pickering/Andy Ballantyne were in 4th in their TR4, with Roger and Leigh Powley in 5th in a 911 Porsche.

Day 3/Leg 2 Saw crews head north to Cheshire, but only after a second helping of Swynnerton! The theme then was to head north loosely following the M6. The first regularity was Barthomley, this was well received and the sting in the tail a tricky to spot “go-er” white which caught a few out. From here a descriptive and sneaky route called Cheshire Plains saw crews head to the renowned Oulton Park race circuit for a test. Next up was Sink Moss, which saw the rally take in roads around the famous Cheshire Meres or Lakes. Preston and Woodcock sent the competitors around the Cheshire Showground as part of this section; it proved to be yet another “dropper” as some crews overshot turns hidden by hedges. The popular Hoghton Tower was the venue for lunch before afternoons proceedings began. A short test sent crews on to “Lancashire Lanes” where competitors were treated to yet another masterstroke! Beacon fell is a well known beauty spot and is a circular road, a one way circular road. The route had been designed to show the shortest route against the flow, once crews had realised they couldn’t go that way, a quick route re calculation saw a few crews drop time here. From here, Barnacre Reservoir was the venue for a faster test, allowing the more powerful cars to stretch their legs.  Caton Moor and the infamous (almost as infamous as one of its inhabitants!) Haylots white were a straightforward regularity, however, torrential rain and hailstone made things very tricky indeed.  Onto a short test called “On the Buses” at Kirkby Lonsdale before a short break at Whoop Hall, scene of many rallies past. As darkness closed, it was time to head into eastern Cumbria and sample the roads around Kendal and up to Kirby Stephen and Warcop Fell, the inclement weather and night catching many crews out here. A final trip over “Pendragon Castle” and the Fat Lamb road by- passing Sedbergh saw a handout containing several ‘not as map’ triangles that really had the crews on their toes. Many crews sailed passed cars exiting the controls, unable to see them as the steep banks shrouded the headlights from vision.

A final two regularities saw the event take in the roads around Kendal and then head for a well deserved break in Bowness on Windermere for the overnight halt.

Ebus and Tullie had their heels clipped slightly by a charging Wignall/Appleton, the margin down to just

over two minutes. The Powleys were in third, whilst John Bateson and Mark I’Anson had snuck in to fourth. Wilson and Vokes had slipped to fifth.

The last day was a day of twists and turns, and not just the route. Heading south, the rally tackled roads around Milnthorpe, it was here that Ebus and Tullie slipped, as did many crews. A tricky ‘not as map’ Junction to the east of Arnside costing crews time hand over fist.  From here, north via Killington

Lake and a fascinating spot height navigation exercise sent the crews heading over into Yorkshire and the famous Tan Hill section. Dropping down from the highest pub in England saw Wignall/Appleton regain the lead. It swapped as Ebus/Tullie fought back hard, but then came the Coup de Grace on the Downholme regularity. The 356 Porsche of Jan and Iain losing a minute between timing points 3/4D and 3/4E. It was this deficit that saw the lead, and the rally slip from their grasp. Even tests around Catterick Ranges and a final charge through Throckmorton and Harewood Hill climb couldn’t regain the lead the Alfa mounted Crew had taken. They had won it for a second year.

The event finished at Harrogate, and with that, the prize giving at a black tie dinner.

Drives of note go to Clive Baty/Henry Carr in the RS2000, superbly consistent and fast on the tests saw Clive take class 8 honours, well deserved.  Will Rutherford-Child, partnered by Father, Bob were always challenging, as were Frank Lenehan/Cath Woodman. The event was well received by all involved and will go down as a close one this year, here’s looking forward to 2014!

Thanks to Bowyz999 (www.flickr.com/photos/[email protected]/sets/72157637272186995), Francesco Rastrelli (www.francescorastrelli.com), Kev Haworth (www.facebook.com/kev.haworth), Motorsport Mugs (www.motorsportmugs.co.uk) & Richard Craig (www.facebook.com/richard.craig.965?fref=ts) for all of the photos! Head over to their websites for more photos and for contact details to buy yourself a copy!