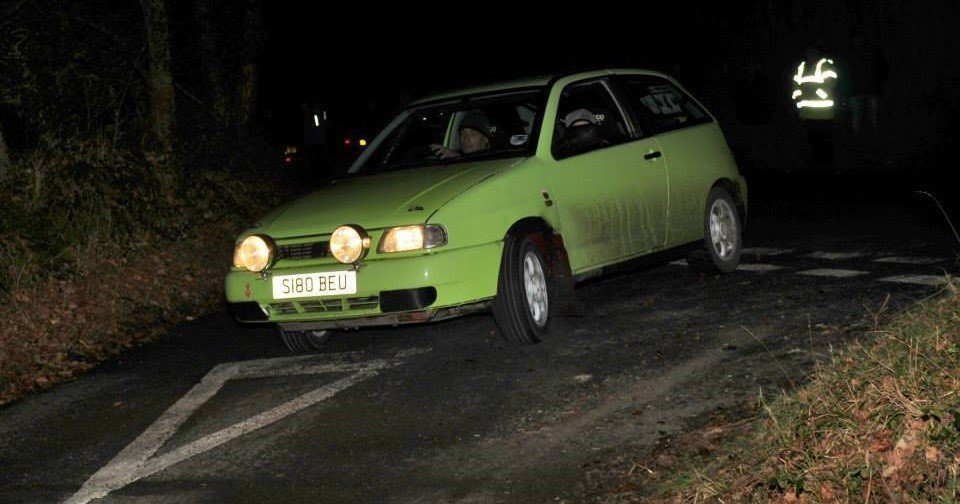 After a few months off for the winter which seemed to last a long time, crews were all looking very relaxed arriving at the start venue and we were through scrutineering and signed on in no time. The car park slowly filled up and before we knew it the briefing was over and the crews were already preparing to plot. The talk was tyre choice and weather, amongst the usual conversations. I had decided to go with Continental winter tyres as I struggled last year with a suitable tyre as hardy as the Yokohama A035 of yester years, and had come across these winter tyres cheap and was very impressed with them especially on the ice.

My nav found some of the plots a bit of a challenge to get all the information down and some pieces were overlapping.

The route, it started with TC1 not quite being in the right place but instead a queue of cars and a police presence. Everything however was under control and the start was moved slightly further along.

The first few sections up to TC3 were not too icy and it appeared the crew of Robert and Phil Pugh in car 4 were absolutely flat out as they were only 36 seconds off the target time and a good 10 seconds ahead of car 6 of Kerr/Freeman and the crew of Welsh champions Dude/Gwawr. Left chasing were fellow VW crew GT/Jenkins along with car 3 Jones/Williams making up the top 5 times.

In the semis car 32 Pughe/Jones and 34 Roberts/Jones were showing really good times and comfortably fighting for first and second in class. We had a pretty uneventful start and after seeing my dad off already in car 26 (Jones/Bee) at the first photo point I was feeling a bit of a Sunday driver and the times showed, 50 seconds slower than my class leaders.

As the rest of the first half went on the ice started to appear in places, with some stretches of common it was very frosty looking. I was happy with my winter tyre choice but still being very careful not to damage their exceptionally soft sidewalls with any big slides.

Going into the second half we rolled out back on our minute with no real problems, the few whites and humps had done little damage to the car however I had somehow landed a bit heavy on the back of my sump guard causing the odd rattle off the exhaust, so we decided to push on a bit more and go for a few more points. We offered the crew of car 34 Roberts/Jones our road position as they were really showing class winning pace and we decided that holding them up would have been unsporting, surprisingly they turned us down insisting that chasing us was more fun, the cruel lot. So that was it we felt suitable pressure to push and inevitably they caught us and we went on the same minute out of a control and had a little battle, this only helped our times and made for a more enjoyable second half.

A couple of the diagrams in the second half were a good pace changer, two that stick out were a dead end where you had to pass a slot right into a code board and back to pick up the slot (RC11), I nearly missed this one even though my nav had reminded me of it at the start control, this one caught out 3 crews including the leading novices who dropped to 2nd.

Another diagram was towards the last few miles and involved a handful of hairpins on loose gravel around machinery and obstacles including under an excavators boom and bucket (very Ken Block Gymkhana) and a quick give way back onto the loose overspill into the lane, at this point I was feeling a bit off the pace of our target so I decided to throw caution to the wind and pedal the Impreza on a bit. As is often the case my added pace caused a couple of mistakes firstly we very nearly missed a code board in a lay-by and lost a few seconds overshooting the entrance to the pull in, then with only 2k left of competitive I clipped a rock on a bit of a slide and picked up a puncture, the pay off for winter grip was very soft sidewalls and it nearly cost us a good finish. We decided the car felt stable enough to keep going and change wheels at the damage control, which turned out to be a wise choose as we only just made it to tenth over all. (by 10 seconds)

We were experts. A personal best for us and my nav “Tree” really done a rather good performance on the maps. The final results were not too different from petrol as follows, The Winners led from the first competitive and held out all night, Car 4 Pugh/Pugh dropping a very impressive 7.33. 3 Jones/Williams 8.12, 1 Dude/Hughes 11.11, 6 Kerr/Freeman 11.14, 7 Jones/Gilbey 12.53, 11 Jones/Jones 14.41, 2 GT/Jenkins 14.44, 34 Roberts/Jones 19.17. 1st Semis 16 Davies/Davies 20.56, 33 Jones/Kennedy 23.49 in 2nd making up the top 10.
Testament to the conditions and challenging route only 2 novice crews out of 11 starters finished, winning the class were car 50 Slack/Belcher dropping 42.19 but critically the only novice crew to complete the rally with no fails, car 54 of Evans/Rhys were showing good pace all night but as often the case in novices a fail was there undoing their work and cost them the first in class, but definitely a crew to keep an eye on.

So out of 61 starters the ice and lanes only allowed 29 finishers. With the car in one piece we headed home feeling rather proud of ourselves and like many times before left amazed at the level of organisation and commitment put in by DVMC and all involved, including the lovely marshals on route that were blatantly much colder than us in a heated cabin.

The first round of the WAMC, WBCC and ANWCC over and only a couple of weeks until the Bro Caron where a few more whites and entires will surely make for an exciting instalment to the 2015 season start.