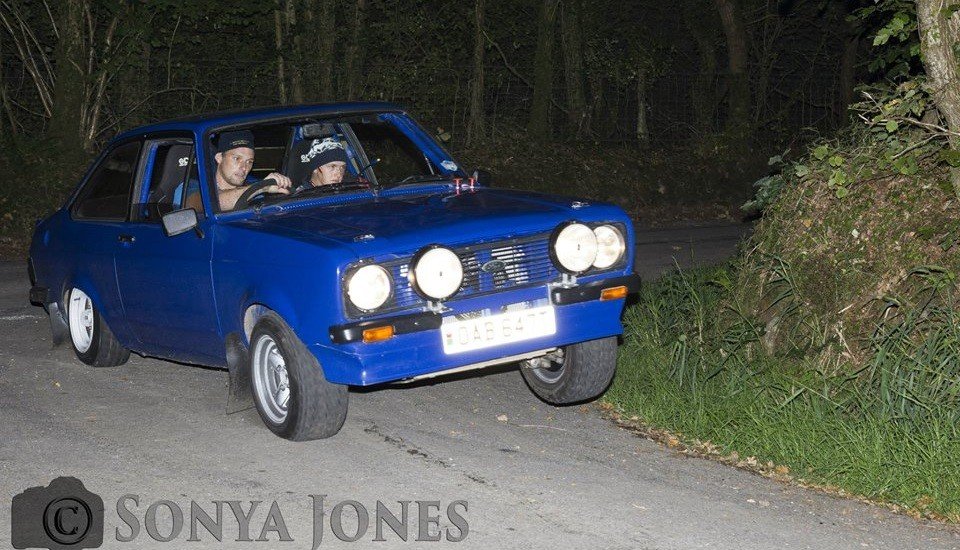 Its weekends like this that keep us addicted to the sport!

Harlech & District MC know how to throw a good road rally together, with the Rali Llyn being voted best event on this site for 2 years now and also the Rali Meirion.

After travelling up to do the Llyn already this year I wasn’t planning on making the trip for the Rali Meirion, but Jamie Jones gave me a call a couple weeks before the event looking for a replacement for his usual nav, Jonathan ‘Tree’ Kennedy as he was previously engaged. Jamie’s a contender in the Welsh Road Rally Championship and with the Meirion being a contesting round, valuable points were on offer!

Being picked up at 11am for a road rally seemed a little bit odd, but the 3 and a half hour drive up was ahead of us, so leaving Swansea at around 11:30 we headed off to pick up the car. By the time we arrived at Noise test we were the first one there, keen as beans to see what was ahead of us!

Being the first car at the car park we took an estimate on where to park, but by the end of the night anyone outside the top 10 seemed to be parked ‘South West’ style (bung it in wherever there’s space!) The start venue was plenty big enough for the drivers briefing before people started to pick up their plots for the night. The atmosphere was as good as ever with everyone talking about what to expect for the night. The peoples champion was even spotted dragging his heavy right foot through the car park ready for a bit of a spin! A quick thank you has to be said to Dylan Jones for signing on to marshal for us! Its a little hard trying to drag people up that far, thanks also to Declan Mason for finding him.

While we were waiting for our time at MTC0 Jamie received a little good luck message from Ken Block out in France for the World RallyX, head to the Facebook page to see what he had to say! A little surreal seeing someone that famous wishing your driver good luck!

Our time soon arrived and we got stuck into plotting the route. A couple amendments which were no trouble and we rattled through getting it down onto the map in plenty of time. There were a few sections of road which were NAM, which we had already been warned about.

Conditions were perfect with dry roads and no fog to be seen. A short run out to the other side of Porthmadog took the crews past Morfa Bychan for the start. Straight into a PC with a diagram to test everyone was awake. We were warned that the police were there and there would only be 1 cone to go around, to arrive there to see a mass maze of cones and no police, so we done what we thought was right and headed into the PC. The first section was relatively short, finishing just before the road joined the A497.
Arwel Hughes-Jones & Dafydd Evans (Mk2 Escort) got off to a blistering start dropping only 1 second with Kevin Kerr & Huw Rhys Manion (Mk2 Escort) 11 seconds behind. In third at this early point were Richard Jerman & Lowri Davies dropping only 16 seconds.
Leading class 2 were Steffan Llywelyn & Tony Jones (Corsa) dropping 37 seconds, closely followed by Phill Roberts & Iwan Llyr Jones (Saxo) and Gethin Povey & Daniel Jones (106 GTi) both on 44 seconds.
Class 3 was lead by Mark ‘Bych’ Williams & Colin Williams (205 Rallye) dropping 50 seconds, Robert Mason & Rhys Roberts (Nova) were close behind on 54 seconds and just another 9 seconds behind were Iwan Cynfal Roberts & Deion Atkinson (205)

The route then hopped over to map 123 and headed to the edge of the Llyn peninsula. Slotting off the A497 at Llanystumdwy and back into the lanes. Crews slotted left down a tarmac white and then into a slot hairpin right which caught out one crew in front of us in the ditch on the outside of the corner. The route then headed north west before heading back up towards the A487 near Garndolbenmaen. Crews then completed a large loop to the east of Bwlch Mawr before heading back toward the A road. A lovely slot hairpin left onto a white with a caution ended the second section of the night.
Hughes-Jones/Evans were the only crew to clean the section retaining their lead. Kerr/Manion were still hot on their heals in second with Iwan ‘Bont’ Roberts & Steve ‘Griffo’ Griffith (Mk2 Escort) now moving up to the third position.
Povey/Jones were the quickest Semi-Expert crew moving them to within a couple seconds of Llywelyn/Jones who were still leading the class. Phill Roberts & Iwan Llyr Jones (Saxo) had a good section moving them up to the final podium position.
In class 3 Daniel Williams & Hywel Humphreys (Saxo) had the quickest time but unfortunately picked up a early fail dropping them well down the leaderboard. This moved Mason/Roberts up to the top spot in the class with Williams/Williams now in second, Ian Roberts & Jason Gizze moving up to third in another 205 Rallye.

Back off map 123 now and a short section twisting its way along the A487 before petrol. A route amendment was given out at the start of this section with another grid reference to change the finish control location. The crews went round a large triangle before heading across the main road just up the road from the start. Heading down and slightly back onto 123 (or onto a homemade drawn bit of road like me) for a hairpin left before a couple 90’s and back up to the main road. Another large triangle and then down to the new finish point. The route amendment moved the control down onto the main road, so we gave way just up the road and headed down to the control just in time for our minute, before realising that other crews were coming down a tight track from just before the original control location. So a quick turn around for us as we darted back up the road to get the correct approach. Gutting to lose some time here and possibly a class position due to a amendment, I don’t recall an approach or depart on the amendment, but thats how it goes sometimes!
27 crews were clean through this section meaning the top 3 overall and in class 2 stayed in the same going into the petrol halt. The main movements were in the novice class with Williams/Williams back on the top spot almost a minute ahead of Mason/Roberts. Another 2 minutes behind in third were Aled Jones & Ashley Saunders (Astra). 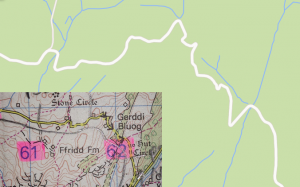 back up the map along the edge of the Artro river. A caution tight 90 left 90 right followed by a diagram kept the crews on their toes and woke them up a little before the first major NAM section of the night, and what a section of road it is! This image to the left shows what the map looks like compared to a zoomed in view from Google Maps, as you can see the gradient arrows get in the way and some of the corners aren’t even shown. Jamie handled it great with very few calls from me, reading the road and throwing it in at the correct spots. After the NAM section a GW right lead the crews along the side of the valley and up to SS4F just outside of Talsarnau again.
Hughes-Jones/Evans were quickest again dropping only 6 sections over this tricky section. Jerman/Davies were second dropping 30 seconds, moving them up to third overall at this point. Kerr/Manion were just 1 second behind through SS4 keeping them in second.
Quickest Semi’s were Povey/Jones dropping 1 minute 50 keeping them at the front of the class. Horn/Jones had a good run moving them up to second in class, moving Roberts/Jones down to third.
Williams/Williams were the quickest novice crew dropping 3 minutes keeping them ontop, Mason/Roberts were still in second with Roberts/Atkinson regaining the third place position.

A short SS5 ran just below Maentwrog which included a slalom style diagram with 2 triangles either side of the road.
Hughes-Jones/Evans, Kerr/Manion, Roberts/Griffith and Rob Pugh & Phil Pugh (Ibiza) all cleaned this section leaving the top positions the same as well as the top 3 in each class.

SS6 started down the A487 below Llan Ffestiniog, the route touched onto the A470 slightly where the cars could be opened up, but not for long. The route slotted 90 left back towards Maentwrog and up to the A496. 26 crews cleaning the section which left the top positions unchanged again.

The next competitive section included the second major NAM section of road for the night taking crews up to the top of map 124 before heading back down to Garreg. This time on the map it looks like several long sweeping corners, but when you got there you came across several tight little chicanes, yumps, bumps and the odd rock that had been pulled out by a previous car. Another great section of road.
Again Hughes-Jones/Evans cleaned the section along with Jerman/Davies, Ian ‘Dude’ Roberts & Gwawr Hughes (Golf GTi) and Reian Jones & Cadog Davies (Ibiza). The top 3 not changing but a great battle between several cars were going on to get in the top 10, just 52 seconds separating 2nd to 8th place.
Jamie Jones & Daniel Pidgeon (Impreza) were the only other crew to clean the section moving them up to third in class 2, Povey/Jones and Horn/Jones still holding onto the top two spots.Roberts/Atkinson had a great section only dropping 52 seconds giving them a little more time to play with in the final class podium position.

The final section of the night started next to Aberdunant Hall Holiday Park and across the moors, over another caution for a rough section of road. A couple more triangles along with a caution ‘don’t use track’ (it looked like a 4×4 track so you would probably get stuck) around a over 90 right. The cars headed up past the Woollen Mill before slotting right and over a humpback bridge and then finishing just before the A487. Several crews cleaned the section again, Povey/Jones were quickest in class 2 only dropping 15 seconds and Arwel Cullen & Owain Baum (205 GTi) were quickest Novices through the final competitive section dropping 1 minute and 4 seconds.

And that was it! Crews headed back to the Goat Inn for a well deserved breakfast! The wait for the results were minimal as usual from ‘The Brotherhood’ and it soon emerged that we had got ourselves a trophy for third in class! We were just 38 seconds behind 2nd place but only 15 seconds ahead of 4th in class, so it was a close fight!

As expected Arwel Hughes-Jones and Dafydd Evans came away with the win, only dropping 7 seconds the whole night! A massive effort which paid off. Dafydd is only in his teens but has been navigating for 4 years now, having 4 2nd’s, 3 3rd’s and about 10-15 top 10’s he finally managed to grab a win on the same event his farther Edryd got his first win on! Well done Daf!

Well Done to all of the team at Harlech & District MC. Some of those roads are so tight and technical and are perfect for road rallying! I’m very tempted to make the trip up again next year now! Thanks to all of the Marshals, some of who we saw more then once, for staying out in the cold for us to have a enjoyable night!

Finally Mr Jamie Jones, hell of a driver! Him and ‘Tree’ will be a crew to watch in the years to come, with the correct attitude to improve and hunt down those top 10 positions matched with his quick reactions and brilliant car control! Just to add, he drives bare foot… So he can feel the pedals better! Great spin, thanks again!