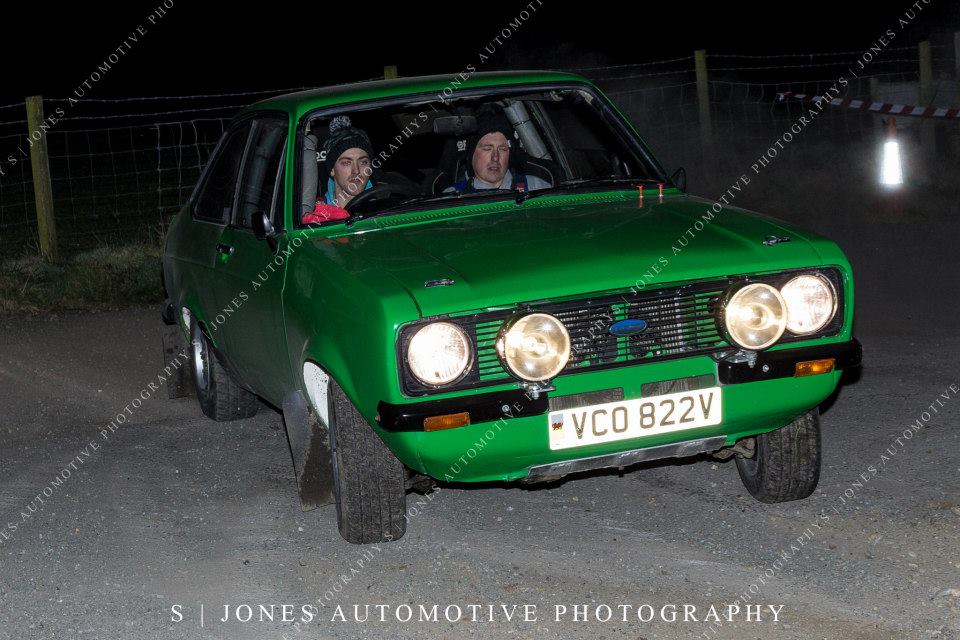 Seeing as I’ve decided to have a go at 3 championships this year, somewhat impressed by Dude and Gwawr’s multiple championship wins last year, this is one of the trips up to North Wales this year as the Llyn is part of the WAMC, WBCC & ANWCC. So I thought best have a go at picking up some solid points. Having never done this one before and looking at the results from this event last year there’s a good few droppers to spread out for the 90 cars on route making for an eventful nights rallying.

So I drove up from the South Wales valleys early Saturday afternoon and headed for the start venue at Pwllheli, weather was perfect, as it had been dry all week and the sun was out, everything was running smoothly at the start venue. Cars packed in as the atmosphere started to build, the athletes for the lanes were going through their rituals of banter and caffeine intake and the wait for car 1 of Carwyn Evans & Dylan John Williams (Mk2 Escort) to leave soon arrived.

The first dropper proved a really good start to the event costing all crews some time, the quickest, car 5 the Escort of Kevin Kerr and Huw Rhys Manion only dropping 13 seconds off the target time and all but one novice dropping over a minute. Fastest novice’s were car number 67, Gareth Davies & Bryn Jones (206) dropping a decent 41 seconds, which only 2 Semi-Expert crews were able to match, cars 52, Andrew Baines & Chris Evans (Escort) and car 53, Meic “Pendre” Roberts & Sion Tegid (106 GTi). But with at least 4 more droppers to go it was still anyone’s fight for the battle to petrol.

Sadly the crew of GT & Dylan Jenkins were out already in the usually reliable Golf Mk2 suffering with oil pressure issues which is a real shame for any crew but these guys were going to be on it for the win after not having the best season start already.

The route was really well put together and with plenty to keep the crews sharp, such as lots of 90’s tight and open and some really flowing 30-60’s, and with the roads being so predictable grip wise it was bone dry out there I think the athletes were smiling as we didn’t see any badly damaged cars anywhere.

So with the first half nearly over times wise up to STC13 cars 1 (Evans/Williams), 5 (Kerr/Manion) and 2 (Arwel Hughes-Jones & Dafydd Evans, Escort Mk2) were really showing dominant pace dropping less than a minute on every section until, the very last section before petrol.

This farmyard will haunt me for a long time, due to bedding in new handbrake shoes by this point I’d lost all of the handbrake. I don’t know what they had been feeding the cows but I got the stink of cow s**t baked on the exhaust, I can still smell it right now if I open my back door which goes into my garage! As bad as the smell my driving stank worse, I’m usually perked up at the sight of a series of tight hairpins in a farmyard of faeces, but the minimum traction and massive struggle to get my Impreza to slide created a labyrinth of 6 point turns and embarrassment as the car behind crewed by Jordan Reynolds & Jordan Dziadulewicz (Corolla GTi) were literally waiting for me to get out of there and cost them a fair bit of time probably putting them behind of us at the petrol results, but it was too tight to pass in there, I dropped 3.12 here alone.

But this section cost the very best over a minute and the dominance of the top crews was clear here, 1.27 for car 1 (Evans/Williams), quickest semi through at 2.31 car 48 of Thomas Jones Thomas & Gwilym Wyn Evans ((205 GTi). And in the novices car 65 of Gary Ollerenshaw & Jamie Ollerenshaw (Civic Type R) were doing well to only drop 2.44 being one of 3 novice crews dropping less than 3 minutes here.

We rolled into time recovery already fuelled up and I was so far amazed at the young navigating talent Dafydd-Sion Lloyd, at only 15 he caught my attention towards the closing rounds of last years WAMC championship where he finished the season 2nd semi expert nav competing with Mark Dukes in his modest Corolla, so far Daffydd-Sion had plotted like “a roamer” and in conversation I got the impression his potty training was done when he was still in nappies.

So a quick tighten on the handbrake adjuster and some spit/polish on the lightforces and it was back out into the Llyn’s second half lanes.

The pace had already been set high and the quality of the roads and crews were only set to improve, five time droppers made up the results and again the top cars were dropping less than a minute, as for the rest of the field there was an awakening in the the times maybe due to the confidence in the grip available.

STC17 was the first comparable section the overall leading trio had become a duo as Hughes-Jones/Evans recorded no times in the second half due to a gearbox retirement, leaving the leaders fighting over 14/17 seconds lost. The novice crew of car 67 Davies/Jones made a nice gear change pace wise and started pulling some really quick times dropping only 39 seconds in that first section and were set to continue like this through this half.

Onto STC26, 3 more sections of time loss for everyone with the leaders managing to only let about a minute go, but the quick novices lost about 2min 20 so the field was not spreading out too much.

Arriving at the last dropper STC30 nearly every crew managed to clock less than a minute lost which is rather impressive, car 40 of Reynolds/Dziadulewicz showed to be a possible future threat to the top crews loosing only 12 seconds here and I can confirm this by the lights catching me in my mirrors as they were the next car behind us on the route and really pedalling.

And that was it a really, enjoyable event, fast and grippy which resulted in many retirements due to driveshafts and even a few bottom arms pulled off rather than any big offs.

At breakfast I found out that we had booked in early on the last section incurring a fail, just about the only downer on the night as we were looking at decent points and we really did have a right good night.

The old Ford Escort proved the weapon of choice and made up 4 of the top 5 crews, with the Dude and Gwawr’s mean green VW machine breaking the trend in 5th. The final results were as follows;

Full Results can be found here.