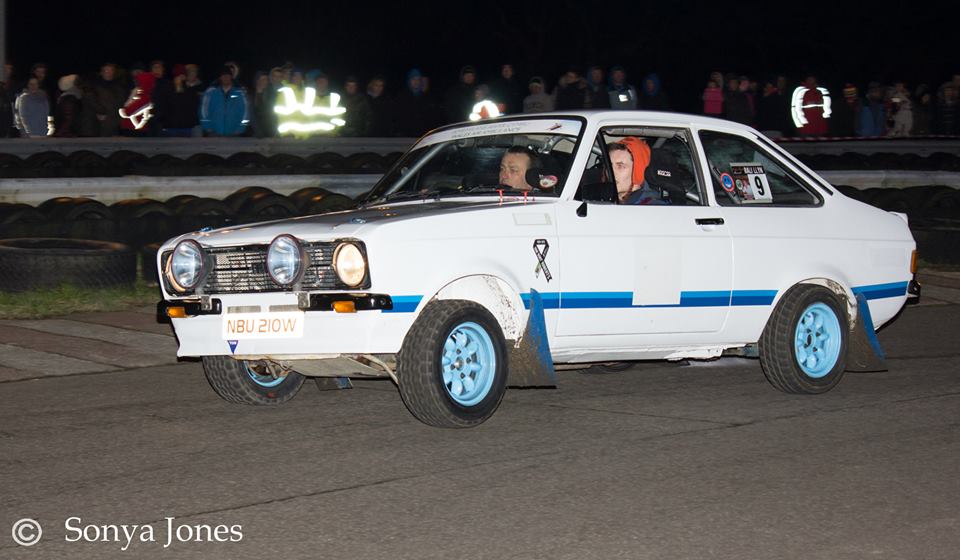 The Rali Llyn has always been a popular event, being voted the best event of 2012 and runner up in 2013 on this site. With a full entry of 90 cars with several reserves on standby Harlech & District MC had another brimming entry, with the top 25 all being within a chance of being in the top 5. But who would be ontop by the end?

As usual the event started at Parc Glasfryn on the Llyn peninsula, with a lap of the go kart track to start the event off. Gareth Rhys Jones/Aled Wyn Jones, Andy Davies/Lee Taylor & Wyn Roberts/Lowri Davies all taking the quickest time with a 1:23, note that none were rear wheel drive.

Then there was a run out to the start of the lanes near Pontllyfni in the north of the peninsula. The route headed south over a tight bridge and down to the A487 to finish off the first section. Followed by a tight twisty section below Penygroes starting on a white and then hopping across the main road to the small yellows. The white has to be one of the smoothest whites the country, not the rough farm track I was expecting, but a smooth tarmac track with 1 speed bump (turned out that most of the whites around the Llyn were similar to this). Over the road near Nebo and this is where I made our mistake, missing the first slot left and missing a PC and a white and then hitting 2 rocks due to the caution not being called as I thought we were on the white before, so we picked up 1 fail, a puncture, snapped spring and bent strut here. The slot 90 right between the walls was very tight, the Imprezas must have struggled a little! Down along the yellow running next to the A487 into another caution over brow into split left, another slight moment for us.

The rally then slotted into the slippy lanes towards Bwlch Mawr and then south to Llanystumdwy, with a few more cautions and plenty of wet mud around this kept the drivers and navigators on their toes. A small section with some lovely 90’s and tight corners near Chwilog followed before heading to a early petrol halt at Pwllheli. Several crews were already out with accidents and problems including Kevin Kerr/Huw Rhys Manion & Guto Ifan/Cadog Davies, two crews capable of a great result.

Back into the lanes near Penbodlas with some very quick straights and possibly the best farm section ever ending near Botwnnog! I don’t know if it was me but it seemed to go on forever with around 10 hairpins, 5 or 6 90’s and plenty of cow muck for the escorts to swing it around! Unfortunately for us the handbrake on the 309 wasn’t the best so we had to do a few 3 point turns, along with the car being a little low with the earlier mishap we took it slow as we were bottoming out quite a lot. The route then twisted its way past Botwnnog and down to Rhiw with a lovely slot hairpin right on a white, again failed by us!

Onto a couple very fast sections between Aberdaron and Llangwnnadl with a handful of quick corners and a couple diagrams to make sure the navigators were still awake. Then back to Botwnnog and up through a farm to some more fast wide lanes to take then event up to the A497, one final small section near Pentreuchaf before heading to to the final TC and back to Parc Glasfryn for the finish.

What an absolutely brilliant event, which definitely lived up to it’s reputation! A bit of absolutely everything thrown in with some of the best lanes I’ve been around and a very slick organisation from the organising crew made the event very memorable!

As usual there were several stories floating around at the finish, the battle between the two Golfs of GT/Dylan & Dude/Gwawr and Reian/Michael in the Ibiza sounding brilliant with only 9 seconds separating the three at the finish.

The Semi-Expert class was won by Thomas Jones Thomas & Gwilym Wyn Evans in their Peugeot 205 GTi followed by Hugh Evans & Iestyn Williams around three and a half minutes later. ‘Polly’ & Chris Davies brought their Rover 200 back to claim third.

The Novices saw a win from Ioan Fox & Sion Tegid beating all Semi-Expert crews as well, a brilliant drive from them. Robert Williams & Peredur Davies drove their Vauxhall Chevette to second in class with Sion Higham & Tony Jones less then three minutes behind.

Just a quick thank you to Gareth Jones for the drive in the 309 GTi. The cars first finish and a brilliant drive once we got into the stride of it all! Also thanks to all the Marshals who were stood out in the cold night for us. And a final thank you to all the organising team from Harlech & District MC, a brilliant event which lived up to it’s reputation, I will be back for a clean run!