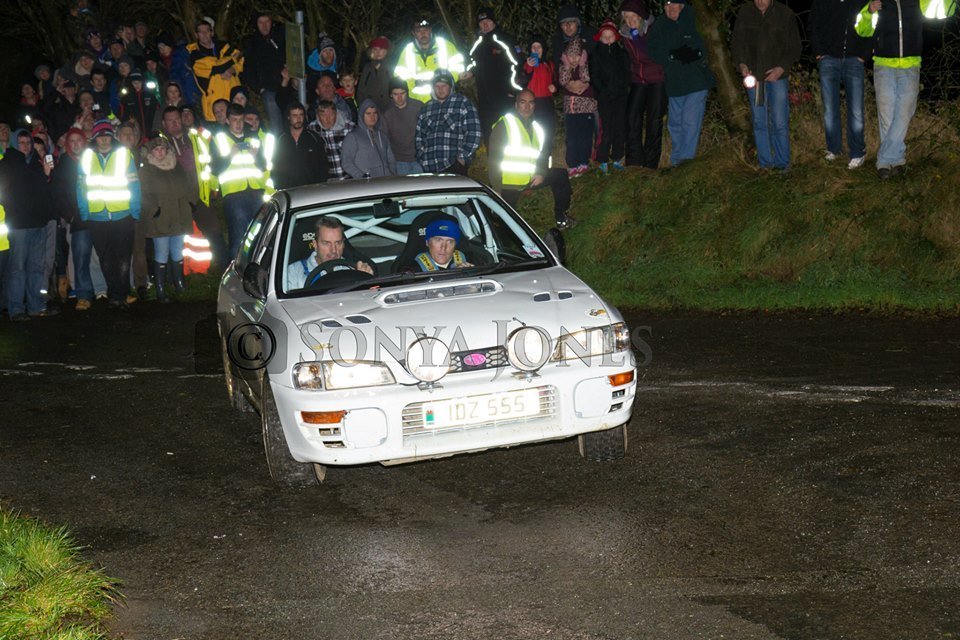 The Rali Cilwendeg has been held in high esteem for as long as I can remember. Regardless of the varied route and formats the event has taken over the years it still attracts a full and usually high quality entry, with each competitor either keen to get their name on a prestigious trophy or simply to get around the route and tick the ‘completed the cilwendeg’ box. The quality of entrants and the location of the event deep in west wales, heart of road rallying country, therefore attracts large crowds to boot, creating a great atmosphere at the start venue and filling the usually desolate country lanes with a buzz and amass of reflective tabards.

This year saw the event return to it’s traditional start location in the mart, Newcastle Emlyn, where moderate weather conditions helped draw in a consistent and bustling crowd around the 75 competing cars. 10:30 soon came and crews started frantically plotting the six pages of grid references in the 75 minutes given, not everyone managing to finish in time.

At 11:45 the first cars headed out into the lanes, this year the club had opted for a more traditional format with no tests. The event got under way with mixed fortunes for many crews, favourites for the win John Davies & Eurig Davies (Mk2 Astra) taking an early lead along with Dyfrig James & Emyr Jones ((Mk2 Escort) both cleaning the first section. Car 2, Gethin Morgan & Steve Herbert (Mk2 Escort) and car 9 Stefan Davies & Justin Davies (Mk2 Escort) were out early with electrical problems. Car 3 of Arwel Hughes-Jones & Dylan John Williams (Mk2 Escort) were also out with an issue at a time control, the same control also costing car 7, Andy Davies & Cadog Davies (Impreza) 30 seconds with a slight mix up. Early pace setters in class 2 were Gareth Thomas & Edwin Venville (Mk2 Escort) with cars 23, Malcolm Jones & Rhys Jones (Satria) and 19, Simon Summers & Rob Leeman (Mk2 Escort) both within 6 seconds. Class 3 saw the pairing of Tomos Lewis & Reian Jones (Mk2 Escort) take control early on, 7 seconds ahead of Paul Jones & Gary Davies (Xsara) and a further 12 seconds in front of Neil Coulson & Colin Griffiths (Persona) who were third quickest in class.

The first half was a mix of classic welsh lanes linked up by a few smooth but slippy whites. Grip was very hard to ascertain with some roads so covered in leaves you could barely distinguish them from the whites! As the crews reached the mid way point of the first half it was clear that the majority of the main selectives would be droppers, making for an interesting rally! At SF2 car 1 of Davies/Davies (Mk2 Astra) held the lead, followed by car 4 James/Jones and car 5, Adrian Jones & Aled Richards (Impreza). At this point car 7, Davies/Davies (Impreza) were on the back foot, struggling with a few early mistakes but now confident in each other and determined to claw back lost time. Class 2 saw car 36, Carwyn Adam & Richard Smith (Mk2 Escort) set a quick time putting them in front. Jones/Jones were still in second close behind with Summers/Leeman holding onto third. Lewis/Jones were setting a great pace in class 3 now being 27 seconds in front of Jones/Davies. Car 44, Mark Jukes & Dafydd-Sion Lloyd (AE86 Corolla) had moved up to third in class at this point with a total time of 4:09. With 7 selectives to go before the halfway petrol halt It was clear it was going to be all go with only 2 of those selectives being ‘slack’.

A quick refuel session with hurried discussions of the quality of the event along with the usual banter between crews saw the cars head out for the 2nd half where there would be 5 major droppers. The first and biggest of which, would be straight from petrol, with relaxed crews on cold brakes/tyres being put straight to the test. Car 1 of Davies/Davies (Mk2 Astra) were quickest, beating Jones/Richards and Davies/Davies (Impreza) by just 1 second! However things were soon to change with a twist of fate as Davies/Davies (Mk2 Astra) suffered mechanical failure and retired, giving Jones/Richards a comfortable lead. The top 10 crews cleared the next 4 clocks as the rally approached it’s 3/4 point. TC16 saw car 4 of James/Jones quickest, followed by car 5 Jones/Richards and car 7 Davies/Davies (Impreza). Thomas/Venville were quickest in class 2 ahead of Knibbs/Barry keeping them in the top 2 spots in class, Jones/Jones having the third fastest time but an earlier fail put them out on contention for the class trophy. Class 3 saw Huw Tagg & Michael Williams (318 Compact) setting the quickest time, dropping 36 seconds. Just a second behind were Guto Ifan Williams & Llion Williams (Mk1 Escort) and another 2 seconds behind them were Jones/Davies who were currently third in class.

The next dropper selective was a very well put together and entertaining selective using the gravel hairpins of Glogue slate quarry. This selective saw car 18 of Thomas/Venville set an impressive fastest time dropping only 2 seconds, 6 seconds faster than Davies/Davies (Impreza) who were also 9 seconds faster than Jones/Richards. Second in class 2 were Hefin Lewis & Gethin Sollis in the new shape Mini followed by car 29 of Heulyn Phillips & Wyn Mathias (Astra). Lewis/Jones were again out in front in class 3, but only 6 seconds ahead of Adam Pickersgill & Iestyn Pynn (Impreza). Rounding off the quickest top three were Rhydian Morgan & Robert Stephens (205 GTi) who were also up to second in class.

TC20 saw Jones/Richards command the fastest time, 3 seconds faster than Davies/Davies (Impreza) and 4 seconds faster than car 4 of James/Jones. At this point the winners seemed decided and crews headed towards the end where the last section of the night was yet another dropper seeing impressive times from car 19 Summers/Leeman and James/Jones.

The crews headed sporadically back for the finish at the rugby club where it emerged some crews had unfortunately fallen foul to the spotlights in neutral rule which was explained at the drivers briefing. This was secondary however to the hustle and bustle of breakfast consumption and anticipated faces every time an official emerged bearing some paperwork! The room was filled with praise for the event and many commenting on the rallies likening to the classic reputation it holds. No one generally had a bad word to say about the rally with the mix of classic roads/droppers/farms and whites that is so hard yet perfect, seemingly hitting the mark with nothing ‘rough’ at all.

A huge thanks to Teifi Valley motor club for organising such an enjoyable and successful event along with an extended thanks to all Marshall’s and everyone behind the scenes including landowners. A quick round up of the top results. Two Subarus had taken the top two spots with Adrian Jones/Aled Richards taking a well deserved and convincing win, followed by Andy Davies/Cadog Davies on their first pairing together in a fantastic 2nd place. Gareth Thomas/ Edwin Venville came in at 3rd making a remarkable comeback in ‘John Mk1’s’ hired RNX after a large break. In a cracking 4th place after a run of bad luck were Nigel Philips & Mark Lloyd followed by Steve Knibbs & Gerwyn Barry in 5th having again pushed their Vauxhall Corsa to its limit! Tomos Lewis & Reian Jones set quick class 3 times all night giving them the win in class by over 2 minutes. The complete and final results can be found here.

A huge congratulations to anyone that finished the rally.