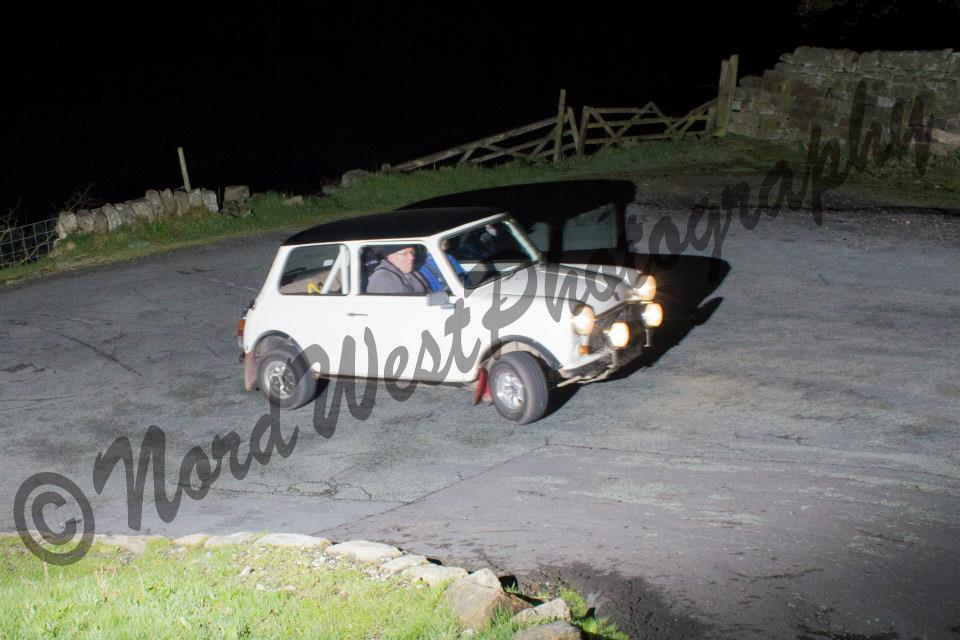 To quote Clitheroe Motor Club stalwart Steve Butler: “Loosely translated it means ‘Tough’.” I quite enjoyed his simplistic explanation at the post-rally breakfast, and frankly I couldn’t agree more with Mr Butler.

‘Spotlight’ editor Mozza collared me at the bottom of Easington as we booked into his control and he asked me to write a few words about the event.

My view is simple. For newcomers and novices who fancy a stab at having a go on your first road rally event, make a note to make sure you enter the event in 2015 as I am certain you will be hard pushed to have a better challenge without going into mental meltdown. And that’s the whole point of attracting newbies.

Keep it simple, keep it entertaining, don’t make it too daunting, and use some cracking roads in East Lancashire and West Yorkshire. It’s a startlingly effective recipe for success.

This year a good 85 per cent of the crews in the 30-car field were of expert status but I suspect next year there will be a few more semi-expert and novice crews partaking of this event. Certainly there ought to be if the word goes out effectively about the format adapted this time around.

I won’t bore readers with details of the route as I am sure that other contributors will give a breakdown in that respect. The important thing for newcomers to take on board is that the handout material was straightforward, offered in bite-sized pieces and not designed to give crews a grey matter malfunction at 3am.

The route was well planned and navigators had to be on their mettle with a lot of intricate sections with plenty of slotting, in some cases using roads I last rallied on back in the mid-80s on Spring-hill and Pendle Motor Club-organised events such as the Summer Rally and the Ribble Rally.

It is to Clerk of the Course Matt Kiziuk’s credit that he had the tenacity to get roads back on that have for too long been deemed off limits, whether for legitimate reasons or simply because they were out of favour with other clubs.

Personally, I particularly enjoyed the first test after petrol which started north of Gargrave and took crews via Winter-burn, Bell Busk and Otterburn.

The next test around Paythorne and through to Tosside was a cracker, too, and the section via Sheepwash and Wham, on a testing moorland road with a couple of very naughty 90s over crests was a botty-twitcher into the bargain, reminding me very much of some bits of the roads on Mull.

I am going to sign off shortly as I don’t want to bore the readers any longer, but a word of praise to Simon Boardman, who put up with me in the car all night and has done so on several other events in the past couple of years.

Now it may come as a surprise to some, but Simon is known in some quarters rather uncharitably in the local rallying fraternity as either Mr Potato Head or Captain Slow. He takes both soubriquets in his ample stride and generally doesn’t give a damn.

But I have detected a change in his pace since last year’s VK Rally, when he got stuck into the tests around Steve Perez’s stately pile on the loose in very aggressive fashion. It was a real eye opener about his car control, and my suspicions were confirmed recently when Malc Graham, a guest speaker at a Garstang and Preston Club night, said he had been seriously impressed by Simon’s driving skills more than anybody else on a stage rally driver day at Blyton.

So now Simon is known as ‘Stig Blomqvist’ – and not because of the similar lack of hair on the old napper.

Age does not seem to weary Mr Boardman. Now the wrong side of 62, he shows no lack of desire or appetite for road rallying and our result on the Primrose, a heady third overall and 1st expert crew, is a result long overdue for him, in my book.

Eeh, if the lanes could talk, to quote someone from Derbyshire. You should have seen Simon on the last test of the night, which took in the roads from Bashall Eaves via Kemple End and over Longridge Fell.

Driving like a man possessed, he adhered to the 30mph average speed in impressive style, showing one or two of the young guns that we caught up with that the old boy has a few miles left in the tank yet!

So, I raise a glass of the finest Rioja to Simon ‘Stig Blomqvist’ Boardman – a man not to be taken lightly any longer. I also toast the organisers of the Primrose Trophy Rally and the hardy band of marshals and volunteers.

Thanks to Nord West Photography (www.facebook.com/pages/NordWestPhotography) for all of the photos! Make sure you head to their website for more examples and details on how to purchase yourself a copy!