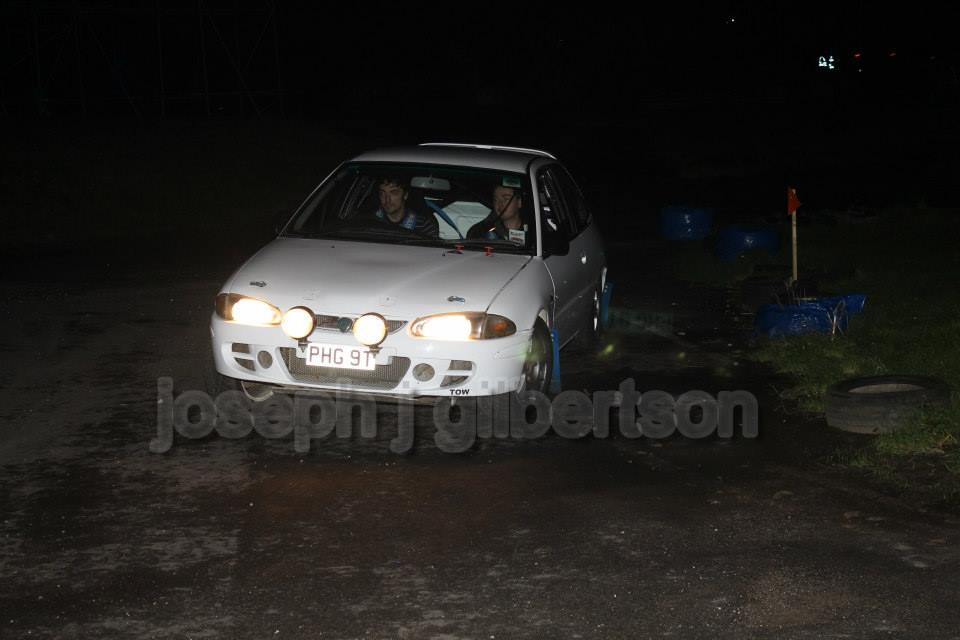 Alan Barnes and Ian Farnworth had volunteered to put on the Preston Regardless Rally, which had not run since 1980, as part of Garstang & Preston MCs 50th year celebrations.

Alan had promised that there would be roads used that had not been rallied for many a long year. And he kept his promise. I was sat in the silly seat with young Ayrton Harrison in his bog standard (other than a spots, cage, belts & sump guard) once again. This was the fourth time I have had the pleasure of guiding this very talented 17 year old driver in his first year rallying. (it should have been our 8th outing but the Illuminations, Countdown & John Robson all got cancelled) Results prior to the Regardless were 7th on the Devils, 10th on the Morecambe & 11th on the Clitheronian. Nobody believes me when I tell them how good he is – ”Its only a 1 litre Micra” – and yet again we find ourselves seeded as last expert (car 21) on the Regardless. Ayrtons comment when I (I am not called ‟Grumpy Old Git‟ for nothing!) grumble to him is “Well, it‟s a learning year for me. We will just have to show them.”

Maps 97, 98, 102 & 103 were required. Not much new on any of those maps other than the roads to the west of the M6 on map 102 so with the start being in Preston it was a reasonable guess that we would be playing out on the flat but very bumpy roads of the Fylde. Ideal Micra territory (No struggling up steep hills!) But before all that Alan had laid on a short blast (Special Test) around Trax Go-kart circuit used by the North West Stages as a Stage. (How I wished I had taken more notice of the road layout when I went there to spectate). We get 9th fastest on Trax (dropped 39seconds). Fastest was eventual winner Dan Willan. After Trax we park up and have 90mins to plot the rest (130 references) of the route before heading to TC3. And yes, the next 2 TCs are all on the Fylde. It seemed that every farmer on the Fylde had been driving up and down the roads spreading as much muck as they could in the hope of us (well, not just us) sliding of the road. Very Slippy and very treacherous conditions aided by a slight drizzle to make it just that little more slippy. There seems to be a lot of the cars seeded in front of us off on these opening sections. We arrive at TC5 just to the North of Garstang still clean (other than the 39 secs dropped at Trax). The other thing I notice on our run from TC3 to TC5 is the amount of people stood in front gardens and at the entrances to Farms waving us on. Just as it used to be back in the „70s. Its not just Rally Folk but whole families. Hope they enjoyed the spectacle and that we kept them entertained.

Neutral down the A6 and past Garstang to TC6. We take the loop round Claughton that includes Dandy Birks white and then it’s the hairpins at Brockmill. TC 7 is at the next T junction and despite the fog that is keeping our pace down we are clean again. Lickhurst, Wickens Lane End & Windy Harbour, Astley House & the SW past Beacon Fell to TC8. As we are passing White Mill I tell Ayrton that we want to take the Next Left at Crossroads. In the fog I had misjudged our pace and we slotted left at White Mill. Realised the error within 100 yrds and got back on course. Still Clean (despite the wrong slot) at TC 8. TC 8 to TC9 is Neutral so just a gentle punter in the fog, and sort out map change to 103 but care not to miss turn into TC9.

TC9 to MTC 2 looks very easily cleanable, despite the fog and the NAM on top of Jeffrey Hill and so it proved. Still just the 39secs dropped on the Special Test. And then it‟s the first Petrol halt in Clitheroe and the fog is starting to disappear. Knowing Clitheroe reasonably well I had not bothered plotting where the Petrol station was. I had assumed it was at one garage & it wasn’t there but at another. Bit of a panic, grab the route instructions to plot it but another competitor comes past us and we follow him (panic over : memo to self “Don‟t be a stupid idiot ! Plot everything, Dont Assume Anything).

MTC3 is just up the road from Waddington (and where Clitheroe & DMC meet) and I travel that road twice a week and know it well. Out of MTC3 and on way to TC 10 just before Neutral. As I handed Time Card 1 to the Marshal at MTC2 I noticed that there was a note on the next time card that there was a Noise test at the top of Newton Fell with a rider saying “Failure to stop at the Noise Test would result in Exclusion”. That wasn’t in the Route Instructions. A bit naughty I thought. However, You would need to be as blind as a bat not to see the Environmental Scrutineer as he was very, very obvious. Dont know if anyone failed to stop. Still clean at TC 10.

We are now a third of the way through and the thought is going through my mind “When are we going to get any droppers?‟ I know that we are not slow in the Micra (despite it being a bog standard 1 Litre Micra : have I mentioned that before?) but we have been waiting outside of Controls for 4 & 5 minutes up to now. Maybe the run over Gisburn Forest, Kingsdale, Barbondale & Gunnerthwaite are going to be tighter.

After another wait for our due time at TC 11 we have Gisburn Forest next. 900yrds almost dead straight and slot right into NAM 4, collect 3 Code Boards and then to the Marshal to sign for them before turning right and back up Gisburn Forest. Ayrton knows the marshal and starts to have a chat to him. A few well chosen words of rebuke and we are out of the NAM and back on the pace and into NAM 5. The Diagram is wrong and the marshals point us to the code boards. Press on and now we start to feel the lack of power that comes with a Micra. Ayrton asks “Fancy a cup of Tea‟, I reply “Forget the Tea, I‟ll get out and give it a push‟. Two more Nams and we are straight into TC 12 : 2m 01Sec dropped. Bugger the lack of power going up Hills. Now dropped 2m 40 in total. The lads with more horse power will really have walked all over us here. Never mind, press on. We go over the crest and see the lights of our minute man further down the hillside. As we come further down the hill we can see that we are catching him but to no good. We arrive at TC 13 up his chuff and have 6 minutes to wait . (Bloody steep uphills & Micras)

On our way out of TC13 and Through Clapham Station to join the A65 just SE of Ingleton. As we round the bend just past Nutts Farm there is the Rover 200 of Wayne Lander half across the road and his car has been over twice. Marshals are there and the OK board is out. TC 14 and 2 minutes to wait. Neutral through Ingleton & Westhouse and then its Kingsdale (a dropper ?). Set off up Kingsdale and thankfully the Code Boards are either on the flat or on the downhill section so we are able to maintain a reasonable pace. As we start down the hill the road gets very slippy and I tell Ayrton to back off we are well early. He backs off and we come round a tight right hander to find another competitor well and truly off the road and stuck in a ditch. Despite the slow (ish) decent of Kingsdale we still have to wait outside the control for our due time.

Neutral to TC 17 and then its Cowgill followed by Dent White (AKA as Flood lane or Dent By-pass) and wait. Still only dropped 2m 40s in total. TC 17 to TC 18 takes us up to Catholes (on Map 97) and back to Gawthorpe (Map98) using the tricky to find white just before Catholes. However, I had plotted the via just past the white junction and didn’t bother with the white. We went further up the road and then slotted left down to the Golf Club. A faster route and we were lucky that there wasn’t a code board or secret check on the white. Arrive at TC 18 and another long wait. Through Gawthorpe and we now have Barbondale. Three NAMs on Barbondale. Still early at the Control at the end. Off to Petrol Halt 2 at Crooklands then back to Newton for the final leg (still on 2m 40s).

At Petrol2 we start to hear tales of woe and who was out and who was doing well. Think we might have a chance of a reasonable result, just need to make no mistakes.

Out of MTC5, past Docker Park and down Gunnerthwaite, almost miss the first Code Board at the entrance to Gunnerthwaite and its only partially written down (must have got enough of it to satisfy the results crew). Round Sunny Bank and evidence of someone having a big moment on one of the not as map bends (lots of big black lines), down Capernwray and Quiet through Over Kellet. This is followed by the NAM at Dunald Mill Quarry. I know this diagram is wrong. I only live 1 mile away and go past it every week, so we are in and out in no time and get both the boards. Dave Whittaker and Bob Hargreaves get confused by it not being as it should and only get one of the Boards and get them scrubbed at the finish. Quick run into NAM 11 (another I know well) and down Halton Park (Monkley Gill) to TC 24. Not far to the finish. Neutral through Caton then up Stock a Bank and the dead straight Roman Road that leads to Kit Brow Ford. We drown out in the ford as Duncan Littler takes a photo of us. The Micra soon fires up and we are off again only to have to wait for our due time at TC 27 & TC 28. Alan Barnes (CofC) is manning TC 28 so we have a chat. Alan tells us that the Micra sounded very good coming up to his control.

Out of TC 28 and over Harris End and then down past Calder Vale to the final control. Still on 2m 40s. We arrive at the finish venue and to a welcome breakfast of Bacon & / or Sausage sandwiches to await the results. Very few crews seem to be there. Results take forever. A printer that did not want to communicate with the laptop and a glitch in the program that added an extra minute to our time. Lots of queries . Eventually results are declared final and awards presented.

Loved the route and roads. Loved using some new roads (well, not new but not been rallied in yonks). Would have liked 2 runs at TRAX. Chuffed to bits with 7th O/A in a Bog Standard 1 Litre Micra (you do know its only a standard Micra dont you?)

Thanks to Joseph John Gilbertson (www.facebook.com/joseph.j.gilbertson) & Jez Turner (www.facebook.com/jez.turner.161?hc_location=stream) for all the photos! Make sure you head to their pages to see more examples and for details on how to purchase yourself a copy!