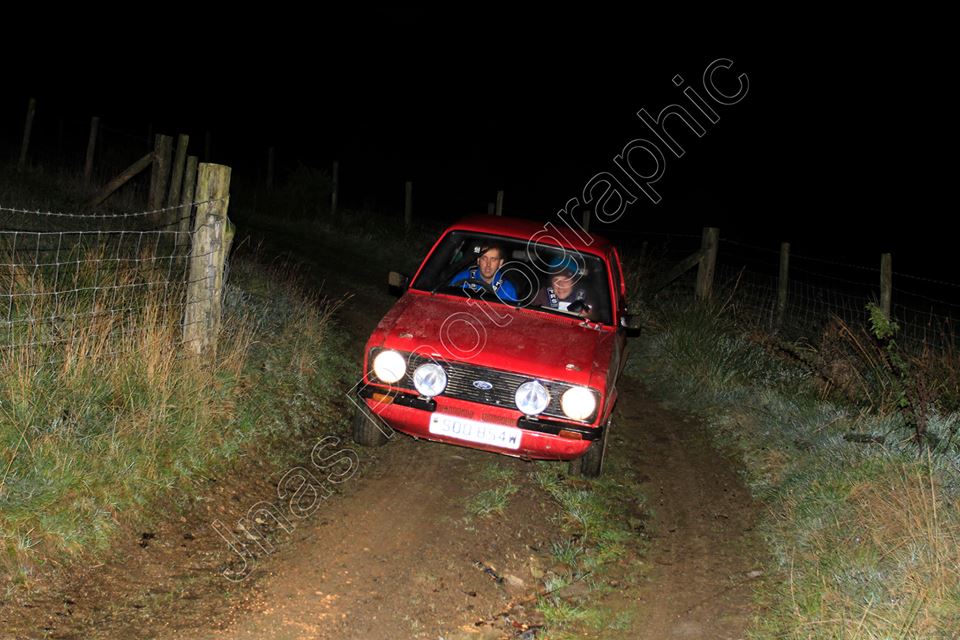 The Powys Lanes 2014, a well organised event based on a great route taking in some of the best lanes in South Powys. All passage controls were manned with only 1 exception which was replaced by a code board. All controls were clearly laid out with control boards visible in good time ahead of all controls including the route checks. The lanes were very wet and slippy, muddy in places although there was very little rain during the night as well as a bit of fog, but thankfully not too bad. The 3M diagram controls were tight enough to slow us down but not so tight as to interrupt the the flow. The whites were all great fun and very drivable.

The first competitive section was a long one (I think about 25 miles but without map or route cards with me I’m not sure). It started NE of Aberedw, turning right through Court Farm and followed the Edw valley past Gregina to Hundred House. Straight across the A481 to Llansantffraed in Elwel to route check on a triangle before slotting into a farm yard to the PC. Then it was on to the first spectator point slot hairpin right (where Jamie entertained the crowds with a ‘Scandinavian flick after passing Mike Jones & Robin Moses in the Green Peugeot 306). Then it was on to Bettws just west of Franksbridge and a slippery white. Straight forward run then through to Landegley via The Bwlchau, slot hairpin right at Brynthomas and hairpin left throughout a narrow gate at Bwlch Y Cefn.

A transport section took us to New Radnor for a series of shorter sections before Petrol at Clyro. The first section took us south of New Radnor throught Yardro to the B4594. The next section was through Colva with an unmanned PC that had been replaced with a code board, a bit off plot as I guess the course car had found it unmanned. There were a couple of more sections on Brilley Mountain before petrol.

After petrol we went through Hay on Wye for a loop skirting around Llanigon which was very wet and slippery to finish NE of Glasbury. The next section took us around Boughrood to Llanstephan, finishing with a long triangle and tight hairpin left. A short non comp took us to the start of the next section on the B4567 NW of Erwood. This took us through Llandeilo Graban to finish near Llanbedre for a non comp through Paiscastle with the next section taking us around to join the B4594 for a non comp down the Sunny Bank hairpins and across the A470 to the start of the next section on The Twmpath. This took us towards Gwenddwr, slotting right at Fron Farm before a slot hairpin right which looked like it was taking us back to the start of the section. But a slot left and follow arrows at Cefn Hirwaun took us across to Little Hill via a farm track marked only as a footpath on the map. From there it was a straight forward run through to Dollynwydd, a very difficult lane to read off the map and with a couple of 3M controls to keep us awake. A short run SW on the B4520 took us to the edge of the famous Epynt Ranges for a final dash through Maesmynis to finish SW of Builth Wells.