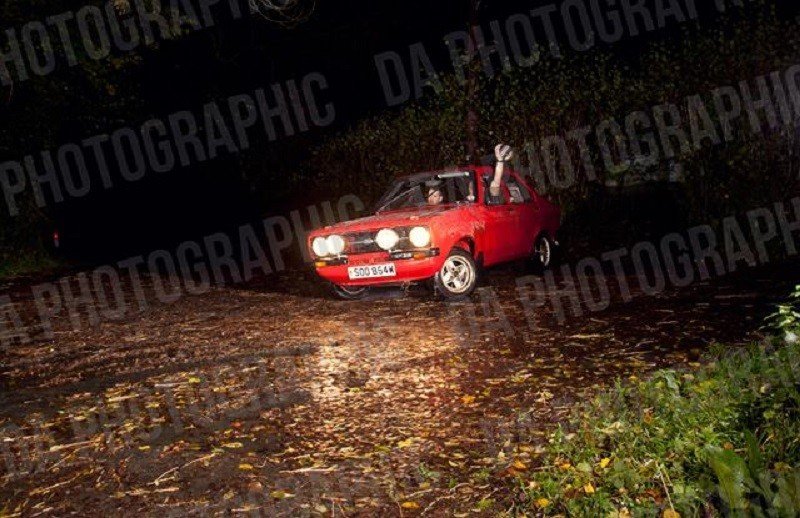 Saturday started off very damp! The drive up from Swansea was horrible with rain all the way, constantly changing, getting harder and lighter but I was heading to a rally, so who cares?!

Arriving at Builth Wells there were a few cars in the car park and the buzz from the earlier stage rally was still lingering. I found Andy over in the corner parked in the wrong place, but he was there! (Better then last weeks luck for me!). Signing on all went OK and the car park soon filled up with all the cars. Was interesting to see John Davies out in a Proton! Once we got back to the car to start plotting the black spots and quiet zones, key went in the ignition, the engine turned over, nothing… So the bonnet was up, dashboard and steering column stripped and the guys started work to try and figure out what was going on! Luckily we were car 53 so had about 2 hours in total to get it sorted! With around 50 minutes to go she was started with a bit of hot-wiring from the guys at Amman & District MC (I would watch out for them on the Mel!) and about 20 minutes later the steering lock was all smashed off!

So with the route plotted and bladders drained, we were on the start line waiting to go! And buzzing for it! The route looked awesome!

The first section was a special test around a farm just above Builth Wells. And here is where I made my balls up! It turns out I didn’t have the latest map and the new road wasn’t on there! So we lost 7 minutes in total while trying to first the start of the test, luckily we saw a car turning off the new road so followed them! (Sorry Andy! My bad!) The test was good with a few nice hairpins and then it was into the lanes!

What brilliant lanes they have around that area! With plenty of leaves on the road and mud from the previous cars it was very slippy out there with road tyres! It was soon that we were coming across a few cars that have been taken by the lanes! A few with mechanical issues and a few with damage.

Another run through a farm and we came across Andy and Ian in the Banana Impreza down and bank and the front nose in the hedge. Not the best way to end the year! Another white and we came across the yellow focus blocking the road with the front down in a ditch. A quick hop up onto the bank (I did wonder if we were going over at one point!) and we were passed.

As I had made the mistake at the start of the night we were a fair few cars back and in with all the novice crews. Passing one car further back in the route we soon were catching cars towards petrol (some a bit more reluctant to pass then others), thanks to the two crews who did pull over to let us past! Then up to PCY, last control before petrol. Then the inevitable happened. After a couple minor skids previously in the night, this skid going into a corner took the nearside front wheel into the grass and then dragged the car into the hedge. It wasn’t the biggest hit in the world, but the bank in the hedge was enough to smash the spots, bumper, arch and bend the sump guard back. Luckily we hadn’t damaged the radiator or any parts of the engine so we could limp it back to petrol and then to the finish.

Once arriving at petrol the scrutineers told us to stop and not even bother to try and sort it. With only 1 light intact and the other in pieces it was the best option!Gutting, but that’s rallying! It happens!

So we headed back to the start to load the car onto the trailer and then to head home! On the way home I passed Andy and Ian heading the other way in the yellow Impreza, so was only minimal damage to their car! Hopefully will be out again soon! (Impreza’s are tough! Would recommend them! Haha)

Want to say a HUGE well done to Epynt MC who put on a brilliant first half and what looked like a brilliant second half! Well done to all the organising team!

Well Done to Irfon & Michael on the win! Well deserved! Well done to Will and Cadog in 10th as well! Finally fair play to Mark and Ian in the Anglia (Car 54) 7th overall! Great to see a different car doing so well!!

Thanks to Car Bits (www.facebook.com/carbits.carbits), DA Photographic (www.daphotographic.co.uk) & Joseph John Gilbertson (www.facebook.com/joseph.j.gilbertson) for all of the photos! Head over to their websites for more photos and for contact details to buy yourself a copy!