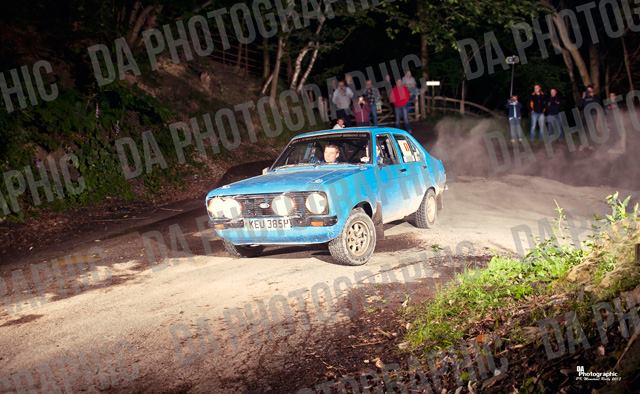 “Had a bit of a mixed evening…

Gareth’s hay-fever meant his eyes were streaming so badly he could barely see past the end of the bonnet, not used to having a driver sneeze every 30 seconds on a dropper!

The first test didn’t suit the Astra on 21s with an ATB, and we had a puncture on the second. Very lucky to get away with a big moment on test 3, cleared it by the skin of our teeth! Took it easy through 4, could see we weren’t going to drop, bit miffed to end up 0:03 down since we stopped dead on, but that’s rallying.

Found the long wait between the day and night sections a bit excessive, but there we go.

Had a mare on the first part of the night section, locked up on the second give way and had trouble getting going again, didn’t lose too much time. Gareth’s hay-fever had cleared a bit but he was still suffering with a sore head! Cleaned a lot of it after that, some cracking lanes, but the long white north-east of Bala was just too rough, given the tyres we’re using as WAMC contenders (the PK has always been a ‘knobbly’ rally as far as I’m concerned) a bit unfair, especially as A2s don’t come in 14″…

Made one of the daftest mistakes of my life, on the last section where our marshals had gone to watch before helping load the trailer, I’d even written ‘GWR AFTER TUNNEL’ on my map and still called GWL… muppet!!

After all that, was pretty glad to come away with 10th; I’ve had far far better nights and ended up 20th!!”