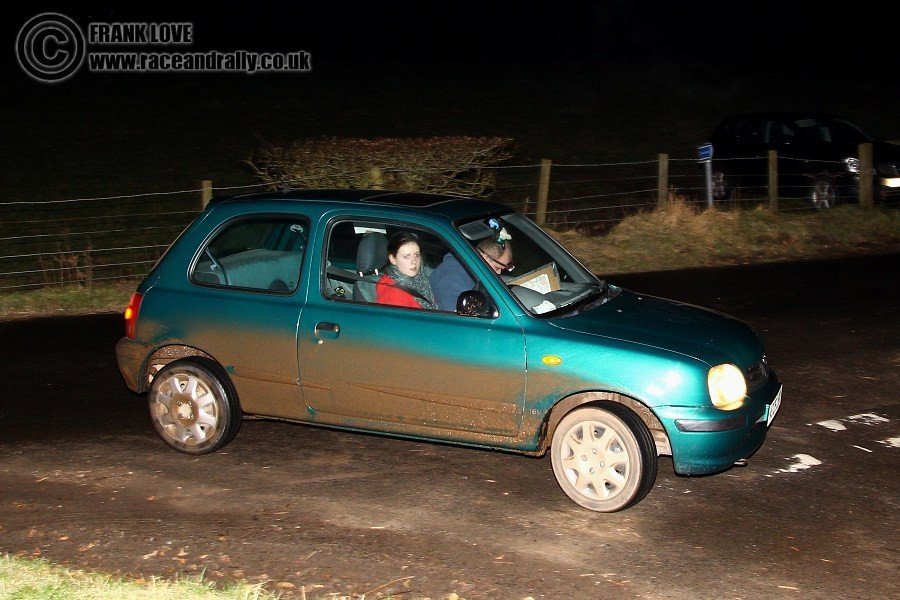 Edinburgh University Motor Sport Club’s Nuit Blanche Navigational Rally was the scene for round two of the 2013 Scottish Navigational Rally Championship on the evening of Saturday 23rd February. On a chilly but nonetheless dry night, mercifully avoiding the snow and fog which afflicted last year’s running, a strong entry of 15 crews tackled an 81 mile route around the twisting country lanes of East Lothian, starting from the Haddington Golf Club and finishing at The Laird & Dog pub in Bonnyrigg.

The event provided a thrilling contest, with Sally Skinner/Ewan Leeming cleaning the event to clinch a narrow win from Jon Huffer/Richard Crozier, who dropped a single but ultimately crucial minute on Section 5, near East Saltoun. The result marked Skinner’s maiden overall victory in only her second ever rally, while Leeming’s triumph was his fourth in this event, now just one short of the record for this 48-year-old classic.

The other two – further travelled – Expert crews of top seeds Dave Brown/Joel Haylock (who had made the +300 mile journey from the Midlands!) and Geordies Andy Whittaker/Charlie Tynan,

were both also in contention for the win, maintaining clean sheets right up until the penultimate section. Brown/Haylock had been made to work for theirs, having suffered a puncture just after halfway, but impressively manage to change it without dropping any time, to remain in the hunt. However, some tricky navigation on the penultimate section near Gorebridge would ultimately see them drop 15 and 32 minutes respectively in the closing stages, scuppering their chances, and relegating them to third and fourth.

Two other crews managed clean sheets – Nick Roberts/Craig Horsburgh claiming Non-Expert, while Jamie Thomson/Gary Brown successfully defended the historic ‘Wooden Spoon Award’ for first EUMSC Novice crew, having swapped seats since last year’s running. Andrew Swanston went some way to making up for the disappointment of his non-finish on the recent Rallye Monte Carlo Historique, as he and navigator Alan Cowan claimed top championship points in Non-Expert, having dropped four minutes on Section 8 around Humbie and Fala. Novice meanwhile saw Ross Hughes/Kirsten Dallas settle the score with father/daughter crew Donald Urquhart/Eilidh Urquhart, having been beaten by them on the opening round in Kinross, by dropping just two minutes compared to the Urquharts’ 28.

The championship now moves on to Fife, with round three being 750 Motor Club Scotland’s Boontree Birl Navigational Rally out of Leuchars on 30th March.

Thanks to Frank Love (www.raceandrally.co.uk) for all of the photos! Head over to his website for more photos and for contact details to buy yourself a copy!