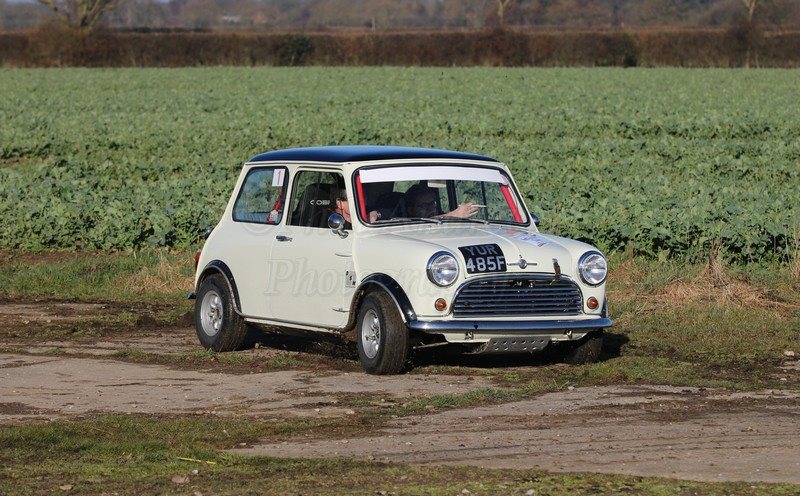 This was the 9th running of the North Yorkshire Classic Rally and it shows this format of rallying proves ever popular amongst competitors. Roger Burkhill returned as clerk or the course ably assisted by Suzanne Barker and the pair had organised the same fantastic event starting at Hawkhills, south of Easingwold, the same start position as my only other attempt at this rally in 2016.

A high quality field assembled with last year’s winner Darell Staniforth navigated by his daughter Nicky seeded at 1. It would not be easy for them with Paul Crosby/Andy Pullan re-united again in the green 911 and Howard Warren/Iain Tullie in the orange 911 chasing them, both pairings prodigious winners on historic road rallies. I was grateful that I came across James Griffiths and James Howell (seeded car 2) before the start as they had played a significant part in making sure my father and I were okay on the Devils Own after we found ourselves upside down and stuck in a burn. In doing so they had given up any hope of a good result and I am very grateful for their assistance, as I am to top lads Kev Haworth and Phil Griffiths who continue to take the p*ss, adding light to a dark situation.

On this event I was paired with John Abel, originally in his mk1 RS2000, but a late change moved us into the Sunbeam Tiger, now that’s a car! 4.7 liters with the V8 soundtrack to match, although a rolling road tune had still left an intermittent misfire which continued to the end of the event, fortunately only on part throttle…. we didn’t come across that situation much on the tests!

The route outlined was a clockwise tour of York and the myriad of roads and whites at the organisers disposal. After 3 quick tests at Tholthorpe, Staniforth was leading, a rare cone penalty for Crosby showing how tight some of the tests were. Test 4 was an opportunity to regroup and watch the master in action, throwing the Mini around and flicking it into a 360 was a good way to fire ourselves up. Not that the tiger took any notice, gracefully spinning off throttle and dropping a few seconds.

The first regularity was a pre-plot and a case of missing blackspots with a sneaky LWR triangle on the opposite side of the roads at Yearsley gravel heaps, catching out Griffiths/Howell who came screaming back past us after doubling back. Sadly an incorrect sign instruction at Skewsby meant the final two controls were scrubbed, keeping the results tight at the top.

Following coffee some more test entertainment at East Moor airfield and even the bank got a taste of sunbeam power as a little nudge set us back straight to the finish of test 5. John Haygarth was by now getting himself well involved with the fight at the top in the forever sideways Kadette navigated by Bob Hargreaves, a technicality on the regs ruling them out later of a top position.

Reg 2 was relatively simple with many crews dropping very little time, despite the reg starting on private land the first control was over 2miles away, double bluff from the organisers perhaps??

Reg 3 dropped us onto map 105 and a chance encounter with a motorbike rally going the other way, causing momentary chaos while trying to exit a T-junction which for some may have distracted them from the road sign they were supposed to change speed at. Stephen Johnson/Dave Taylor in the RS2000 were best here dropping 9s over 5 timing points, impressive work from the new pairing.

Test 8 would be repeated was a fantastic blast round the auction mart at Murton, crews could let the cars run a bit here with fast hairpins and slaloms on gravel allowing a bit of slip. Haygarth was commanding here taking 8s from Staniforth over two tests, very quick piloting.

On the homeward run now and Reg 4 saw the demise of not only Isherwood and Canavan in the Datsun due to a missed codeboard but also Nick Bloxham and Richard Crozier due to an errant exhaust, both crews missing an opportunity for HRCR points on their 2018 challenge. We had other issues in the tiger as it suddenly cut out, not to be coaxed into life. I sat and plotted reg 6 while John worked on the car, what can I say? I was never in doubt it would come round! Still unsure of the issue a change of coil got the car started and we flew down the A64 to catch up some of our lost time.

Tests 10-12 were extremely slippy due to copious amounts of animal matter potentially causing cone penalties for front runners Dave Leadbetter and Cath Woodman but it was Staniforth’s to lose over the last two regs.

Reg 5 included a “miss slot right” from the map which on the ground was dubious at best. This caused myself and John a momentary pause as we stopped to look at the hairpin slot right that we did want 100m further on. It turned out to be correct (thanks codeboard) and we proceeded on with 5s late our penalty at the reg finish, not horrendous but a bit scrappy.

Our final regularity was a mixture of pre-plot and plot & bash. Fortunately the speed change was at the first control. My approach is get the driver on the right road and then leave him while I plot. Giving him a speed check before we get to 2 miles. This proved a good tactic as we were the only crew to clean the first two controls. A cheeky codeboard in a layby off the A19 didn’t catch out many crews, which is just as well as it provided a speed change as well.

A lengthy section on private land took us northwards but the tricks weren’t over yet with a NAM junction south west of Stillington and a final loop to the east of Easingwold which if missed would mean a missed control.

At the finish it was Darrel and Nicky Staniforth who took the spoils, built off the back of being fastest on the tests with a solid 5th place performance on the regularities. Crosby/Pullan took 2nd overall with Andy taking top performance on the regs at 46s dropped over some 100 miles of regularities. I was very pleased with 3rd overall with John in the Tiger, especially after the tribulations on the 2nd half and we just snuck in front of Warren/Tullie in the afternoon tests who came 4th 4s later.

Thanks must go to the York Motor club for a well-organised and very well marshalled event. They even organised that amazing sunshine which if I’m honest was a bit blinding at times, so room for improvement there….