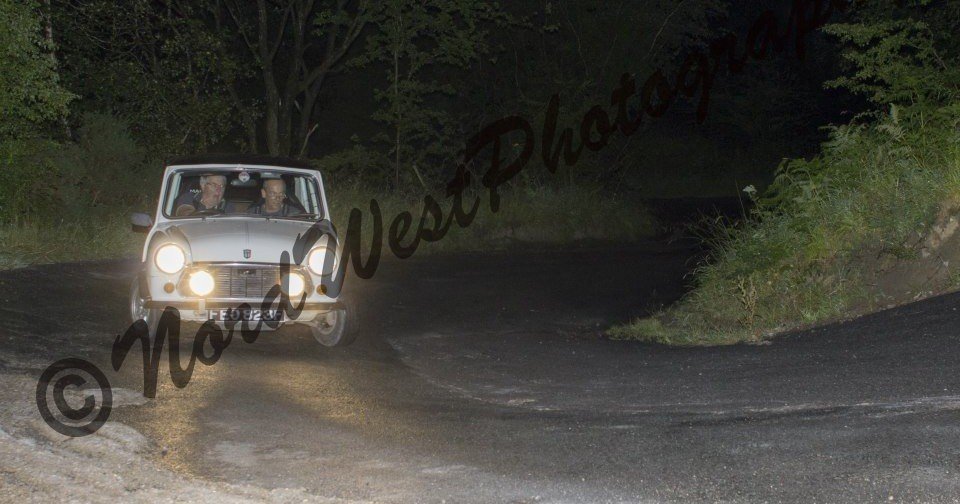 Fantastic Rally. Really enjoyed myself. Was still grinning on the Sunday night. Still got a big stupid grin now. Probably the best event I have done this year.Might even be the best one I ever have done.

Danny Cowell (CofC) and Morecambe Car Club have certainly raised the bar with this one.

My ride for the Morecambe Rally was young Ayrton Harrison (just turned 18) doing only his second ever Road Rally in his bog standard 1 litre Micra (we were seeded at the back – last car).

The start & finish venue was Burton Services on the M6. A short run out past Priest Hutton to MTC1/TC1 even got a few crews lost as they went through the village and mistakenly took the dead end slot triangle to Upp Hall rather than the later triangle further into the village (easily done because the 1st triangle is obscured by a cycle route green dot on the map). A short run past Capernwray Hall and down to Sunny Bank, round Gressingham and to TC2 just over the bridge before Hornby. A 5 mile (ish) Neutral along the A683 to the first of the ‘whites’ up Ridge Lane.

This was the start of our difficulties (well – some of them). Ridge Lane seemed a lot smoother than last time I used it but about halfway through it took a turn for the worse and we landed rather heavily after one jump and from there onwards we had no reverse and depending on what bump we hit, other gears came and went spasmodically. (I am not mechanically minded enough to tell you what the problem was – just the outcome, Ayrton said it was something to do with the cross member being bent and interfering with the linkage, but I wouldn’t know.) It was then Neutral to the start of Littledale. Over Littledale, Left at Crossgill and up round the hairpins on Caton Moor, along Haylotts, down to Butt Yeats crossroads, turn right and into TC.

Next section is down Wray white. We had managed to get past our Minute man and starting to fly. I had the window halfway down and soon wished I hadn’t. The farmer must have been muck spreading. Off the white slot left, first slot right and up Meal Bank to the tricky Crossroads at Mill Houses, take the 1st (hairpin) left and through Russells to T. WHOOPS! Wrong Depart at the control at the T junc.

I must have plotted the approach & depart the wrong way round. With no reverse we couldn’t get the car round and take the correct route so we picked up a fail. Now back on the correct route (following lots of F’ing & J’effing from the left hand seat) and its into Wennington and then Melling white (long time since this has been used for the whole way) God! Melling White is a bit rough. – not as bad as the Derbyshire whites but still rough. Off Melling white, past Clifford Hall and we get past Matt Flynne/ Peter Littlefield as they take the inviting straight on to the Hall. (at this point, if you ignore the fail – and I wish I could – we are 58s behind Pete Tyson & Neil Harrison in 3rd place)

Neutral through Burton in Lonsdale to Cantsfield White. See Ayrtons Dad (Tony Harrison) parked up. They had goosed a driveshaft (I think that’s what he said) on Ridge lane where we damaged the cross member. Off we go and Ayrtons on a mission. I thought we were going off 3 times (always on my side too) but with terrific skill he kept it all under control and my fears were ill founded – dropped 11secs. (Pete Tyson dropped 6s – we were second quickest)

It’s then neutral through Kirkby Lonsdale and up to Nook for the last section before Petrol. Tricky little slot to find the previous Junction left looks as though it’s the correct turning but that just takes you round the back of a row of cottages and back onto the A65.

Out of Control at Nook , 45R into NAM (slot right, hairpin Left – Code Board, 90 R) except we cant find the code board. Wasn’t there but I am now a little distracted checking that I had got it correct when we reach the next Junction. ’Which Way?’ is bellowed at me and another couple of seconds drift away as I find my place on the map. Into Control and we dropped 2m54s which wasn’t too bad – 3rd fastest.

At Petrol, Ayrton tries to resolve the gear problem to no avail (got 4 gears but no reverse) and manages to secure the headlight units back in place with Gaffer tape, however, his attempts to get the bonnet to close fail and we do the rest of the event with cable ties holding it down.

Out of Petrol to next competitive up past Black Yeats to Warth, Turn right at Goose Green and left at Gatebeck Crossroads to next TC.

Neutral up the A65 past Barrows Green, Slot right onto the Helm. And a run along Hayfellside (don’t know how we dropped 1m56s here but with a fail already in the bag – did it matter?) Road/Rail works on the Benson Hall road meant that there was a diversion from here taking us to Otter Bank.

Out of Control and immediately into a NAM, then its hotfoot up the white, T junc turn Left, fork Right, and slot Right at Selside Hall (had a moments hesitation because it’s a T junc but the map shows a fork in the road). Then I cock up twice on the run – I miss call the next 2 junctions. Fortunately they are both up hill so we roll back and get back on the correct route fairly quickly. Then its down to Patton Bridge and we are up the chuff of Dave Head/Ian Farnworth. I call the next slot left but Ayrton only sees it at the last moment (too busy trying to pass Dave) and we have gone past (we then have to go a mile up the road to turn around). From here we pass through Greyrigg and Cowperthwaite for the blast down Lambrigg to the end of the section (pass Ian Newton/Simon Harrison parked up – Simon sat in the silly seat for a change and he was being a bit ill).

We start on the A684, first slot left, flat for half a mile, couple of not as map bends, Turn left at Borrans and the hairpin right and down to the B6254. Turn left and first left at Middleshaw. Next comes Cock Up number 4 (or is it 5 now). Through Middleshaw and keep right , Slot right ignoring straight ahead white, Through Eskrigg and take right fork (miss white on left) along yellow. Except the yellow turns into a white. Sure I have got it wrong we have to turn the car round. No reverse – so we have to get out and push. Then we have to do it all again when I twig the yellow turns into a white where we turned round. Bugger again.

After the problems of the last sections we get it all right on the run to the finish which includes a run round Bandrigg, the forest at Old Park , Three mile House Heights to TC. A run past Rigmaden then up to Mansergh White – last time I used Mansergh White was back in the 70’s on the Devils Own. It is smoother and wider than I remember but as slippy as hell (but it always was).

Up Tosca, down Kitridding to Fowlstone and its all over (Denis Quinn is manning the last control). I have already said what a brilliant event this was and how it has been hard to wipe the smile from my face. A lot of the enjoyment has come from how the roads were linked together BUT I don’t think I would have enjoyed it half as much had I been sat in with someone else.

Ayrton Harrison is an absolute star. He put to shame a lot of more experienced drivers in far more powerful cars. If it wasn’t for my cockups he could easily have had a top three finish in the bog standard 1litre Micra. As it was we still finished 10th O/A, want to sit in with him again – if he will have me!

Keep up to date with everything else in the SD34 area and more with the Spotlight Magazine found here: sd34msg.org.uk/newsletter

Thanks to Motorsport Mugs (www.motorsportmugs.co.uk), Nord West Photography (www.facebook.com/pages/NordWestPhotography) & Red Rose Photographics (www.facebook.com/profile.php?id=727890359) for all of the photos! Make sure you head to their pages for more examples and for details on how to purchase yourself a copy!