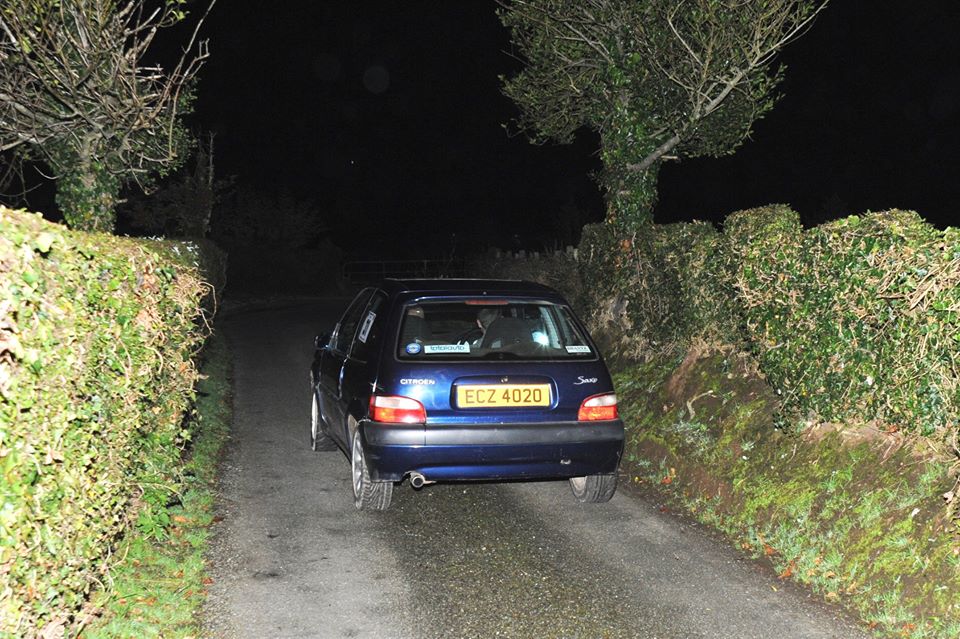 It was appropriate that there was a new moon last Friday night as 30 crews headed out on Dungannon Motor Club’s flagship navigation rally, the Moonraker. With no help from the moonlight, crews tackled four regularity sections in Tyrone’s dark and narrow lanes and four special tests on private property over the course of the evening.

It seems even more appropriate that the winner was called Mooney. Damien Mooney from Coagh, with navigator Tony Anderson, took a clean sweep of the special tests and had a great run on the regularities to win the event by 25 marks. Leslie and Gareth Hawe from Ballygawley were second in their shopping Vauxhall Astra.

The event got underway from Dungannon Rugby Club after crews had plotted their map references and beginners examined their marked map. The navigation instructions were kept simple, and the regularity sections were to be timed to the second with penalties for every 10 seconds early or late.

First up was a test at Killyman, with Damien Mooney, the last car on the road at number 31, setting the fastest time of 49 seconds. Two seconds behind that were the exciting Neil Fletcher and Rodney McCready, tied with Kenny and Peter Anderson.

Mark King, with Grace Campbell navigating, also set a time of 51 seconds but managed to whack a pylon somewhere and, just like David Burns and Conor Murphy, earned themselves a 10 second penalty.

Then the regularity sections began, and the tighter timing meant that penalties started to accumulate fairly quickly. Only four crews were penalty free at the very first check-point, these being King/Campbell, Gilmore/Cleland, Armstrong/Crawford and Quinn/Hughes. In fact, Stephen Armstrong and Adam Crawford made the best start of anybody, incurring no penalties at all until the Time Control at the end of the first section. Here they incurred 19 points and spoiled an otherwise perfect start.

By the end of the second regularity section, Damien Mooney and Tony Anderson were already in the lead with just 7 marks dropped. Leslie and Gareth Hawe were using their navigation rally experience to hold second place with a score of 29. Nigel Hegen and Anthony Mitchell in their Peugeot 206 were third on 35 marks, just ahead of the Henderson Father and Son team in their Nissan Micra with 38 and Geoffrey Lamont / Malcolm McQueen on 39.

Another special test near Carnteel and another fastest time of 59 seconds for Damien Mooney. Mark King / Grace Campbell avoided the pylons this time to share second fastest with Andrew Hughes / Neil Anderson on 62 seconds, and young Gareth Millar / Walter Acheson one second behind that.

Regularity section 3 would take crews into the vicinity of Parkanaur, and clearly navigators were beginning to figure out the tighter timing system. Gareth Millar and Walter Acheson would complete the regularity without penalty, and eight other crews would drop just one mark. By this time, several crews had been forced to retire, including the Escort of Neil Fletcher which suffered a failed alternator. They had struggled on until the battery eventually went flat and they had to head for home.

Special Test 3 was the longest of the night at 0.6 miles. A tricky unsurfaced lane with two farmyards in which pylons were erected to tighten the route. Mooney and Anderson breezed through it in 90 seconds, with Darren Fleck / Gary Wilson second on 92 and then a three way tie on 94 for King / Campbell, Gilmore / Cleland, and Millar / Acheson.

The final regularity section would return crews back towards Killyman. The Hawe Cousins would again show their skill on the timing with just 2 marks dropped, but their performance was matched by William Strain and Robert Hall in the VW Golf, and The Hendersons in the Nissan Micra. Another Father and Son team, Mark and Kyle Thompson, would only drop 5, one ahead of David Burns / Conor Murphy and Terrence and Jonathan Patterson in the big Saab 9-5.

With the regularities all finished, it was time for one more pass through the special test at Killyman. Damien Mooney and Tony Anderson cemented their win in place with another fastest time of 47 seconds, two seconds faster than their earlier run through the section. Mark King and Grace Campbell were second on 49 seconds, just one ahead of a trio all on 50 – Anderson / Anderson, Armstrong / Crawford and Millar / Acheson.

Weary crews headed back to the Dungannon Rugby Club to recover with supper and an exchange of tales from the evening in the Tyrone lanes.

Thanks to Derek Smyth (www.facebook.com/smythdereki) for all of the photos. Make sure you check out his page for more examples and for details on how to purchase yourself a copy!