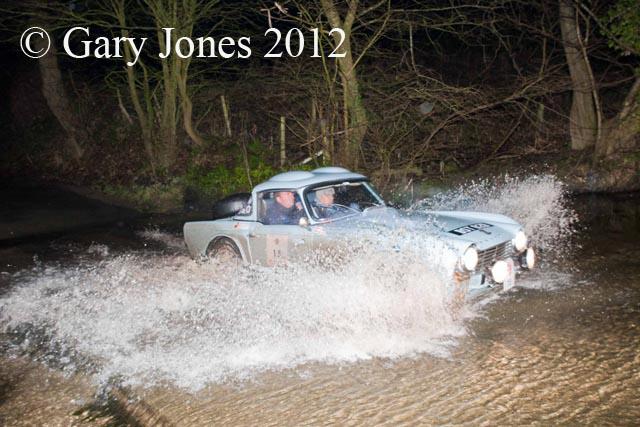 “LeJog or to give it its full title, the Lands End (Le) to John O’Groats (Jog), is not to be confused with the Jogle (yep that’s John O’Groats to Lands End!) passes through Cheshire on Sunday 2nd December.

Last year the LAC manned a special test at Standish assisted by Chester Motor Club, this year they repaid the invite by asking us to assist with their two tests at the former RAF airfield at Pulford near Chester. The airfield now forms part of the Eaton hall estate and Chester has an excellent relationship with the owners.

The tests were anything but Mickey Mouse and needed a fair amount of manning with the LAC taking on the final section of the second test and beginning of the following regularity section.

Good this we weren’t there the day before as flooding would have seriously impacted on the second test. As it was sheet ice, it made it difficult to stand up in some areas never mind drive. To overcome the freezing conditions Bob and Jan Chester ran a coup and bacon bap bar assisted by David Bell on the coffees.

The tests had been set up earlier so all we had to do was sign on and get on post, now pleasantly warm and full of soup etc. First car was due at 09:30 and the first of the course cars arrived about 09:00. The clocks arrived at Test 2 finish about 09:35 when the first entrants were tacking Test One – a little tight.

Problems with the regularity section meant David Bell and Brian Haslam were switched to sorting out the issues and informing entrants. Denis Walton because a Judge of Fact manning the ‘stop astride’ before the finish and Martin Waylie and yours truly manned the paperwork and clock at the finish line. All systems go as the first car approached and we were in business by 09:41.

The entry had dwindled somewhat in the previous days and we only got about 40 of the original 60 entrants and they were quite a mixed bag ranging from an Austin A30, who were very proud of all the penalty points they were collection, through some pretty quick Porsche 911s, Escort, Cortinas and Minis through to a stately Range Rover and a Bristol. Now given the choice of 4 days in a car the Bristol seems and ideal, if somewhat cumbersome, way of tackling the event.

Many of the entrant were from Europe and a couple of Alfas and a ferociously driven BMW 1600 Ti complemented a Audi Quattro in terms of spectacle. The BMW broke down just after the finish line but some quick fettling got it on its way again without outside assistance.

By now the cold was getting to the fingers and operating the clock involved some fumbling but we managed with only one problem. This in part

was caused by the Lotus Elan not bothering with stopping for Dennis’ ‘stop astride’ and screeching into the finish sideways. I’m afraid I miss hit the stopwatch but did record the correct time on his timesheet so no harm donw.

All to soon the closing car arrived and we thanked Bob for inviting us before departing home in time for lunch.”

Thanks to Gary Jones Photography (www.garyphotos.zenfolio.com), make sure you head to his website to see more examples and information on how to purchase a copy.