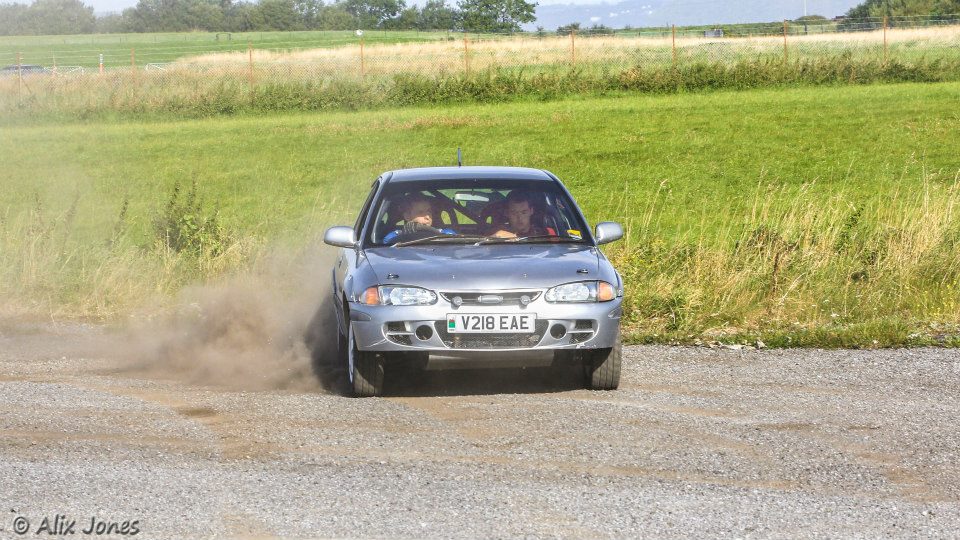 I wasn’t 100% sure what to expect before the first test as I wasn’t sure how Kidwelly MC would interoperate the new style Targa Rallying. After reading the regs and finals it sounded a bit more ‘Autotesty’ with the J-Turns and reverse park then I was expecting, but sure it was going to be a good day nun the less!

On the way down I stumbled across Luke heading away from Pembrey on the hunt for fuel, so sat around a bit waiting for him to return. He did get lost finding a petrol station open that early in the morning, but managed to get back with plenty of time to get through noise, scruitineering and singing on!

And into ‘Lap 1’! And what a hard lap it was! I found from a navigators point of view that there was too much to do all at once. When you were writing down a board or getting something signed you were already ontop of the next manoeuvre, I felt a bit sorry for Luke as a lot of calls were last minute “over there!”‘s! We did miss a couple things out which caused a fail as well as a couple time penalties (I think, but we were 3rd fastest so not 100% if we did or if others got more?!).

Onto the second lap and it was much more of an improvement then the first! Less things going on at once and also we knew a couple of the manoeuvres so it was a lot easier to take in and we started to enjoy it more!

After each loop there was about a 45 minute wait while others finished, things got changed and the 19 other cars in-front went out so this time we decided to go and get a burger. Only to be told when eating that the diff decided to dump its load all over the floor! On closer inspection (after inhaling a cheeseburger) the end plate bolts had managed to loosen themselves! But by this time most of the oil was on the floor… After asking everyone and anyone if they had any diff oil we had to resort to engine oil for the 3rd lap while some of Luke’s friends headed off to buy some more oil! So we managed to get back out in time and took the 3rd lap a bit easier, again the layout was a lot more flowing then the previous two tests, really having some fun now with the RWD! Managing to do 2 or 3 doughnuts at one point by mistake!!

Once back in the holding area we got the car jacked up and drained all the engine/diff oil that was left in and waited for the guys to come back. With plenty of time left we managed to get some proper diff oil in (Thanks to the guys who went off to get some!!! And also Bob Fowden for being open on the weekend!)

Time to attack the 4th test to try and catch up! Everything went smoothly and we didn’t miss anything or get any fails, but pulling into the mid way TC Lee Taylor (Thanks!) pointed out that water was gushing out of the bottom of the car and then steam started to rise! On closer look it seemed like one of the coolant hoses had popped off but it was quite hard to see exactly what it was! After moving the alternator and the intake out the way we found that the blanking plug for the interior heater pipe had come out and was hidden on the top of the sump-guard! The previous owner had fitted a taper blanking one in, but the taper was the wrong way so it slowly worked it’s way out! It was way too late now as the test had finished so we managed to fit a socked step-down in and watched the cars through test 5. After filling her back up with some water from the burger van we drove the last part of the test (was fun to just drive past everything and give it some beans!).

We could have done the final test but it was Luke’s ride home and the blast through the end of test 5 rose the temperature a fair bit, so we gave it a miss to save the car and let Luke get home al-right!!!

Overall it was a great day even though we only done half of it! Everyone said the final tests were the best, so little gutted we missed them, but that’s rallying!

Well done to Kidwelly MC and all the Marshalls, it was good to take on the new Targa style and give it a go! Will definitely be back next year for a spin! (Put the hard one at the end though, not at the start! I think you scared a few people!!)

Well done to all award winners!

Next stop, Cilwendeg or the Barbara Carter!