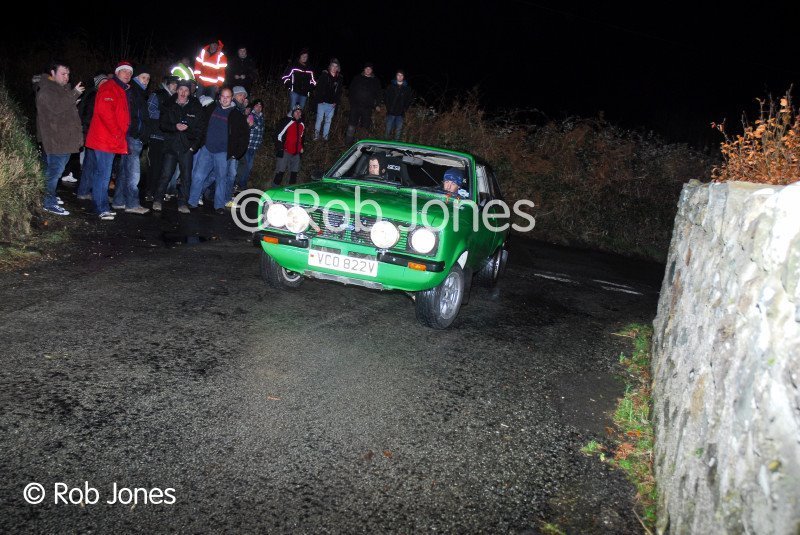 The end of November neared and out of the blue Llion “Tractor” Williams offered me a spin on the JJ Brown rally with him driving, I knew it was a long way to travel for me just for a craic, but I had been wanting to do the rally as it was one of the legendary Motoring News rallies that I never got a chance to compete on, and on a good map.

All that was needed was myself (and associated navving stuff) and an OS map 115, neither of which was a problem as I had a spare 115 left over unused from the Cambrian stage rally (too many signs on stage events haha). The seat was going to be in a Proton Satria, a car I knew Llion drove well as I had seen him in one on a couple of rallies including the Pacemaker. Then in the week leading up to the event he then told me he had hired a Mk2 Escort, John Mk1’s RNX no less! Excitement was building for the rally and set off mid afternoon for Caernarvon and pleased to see a compact Scrutineering to Start location with a good atmosphere, timing was about right as I turned up as Llion was exiting scrutineering. So we then headed to Glan Gwna Holiday park and went through the usual process of signing on, etc. At drivers briefing the organisers gave us a taste to come with the aim of a Motoring News style event albeit only 100 mile route.

Plotting time went well and although my plotting pace was more laid back than usual (2 navigators in one car does make a difference haha). We finished in plenty of time which gave us ample opportunity to watch the top 10 leave the car park, It was a good top 10 and there were at least 4 or 5 different winners.

The field left Glan Gwna and head south to Llanwnda to start the 1st section which was a nice slack section to get the crews up to speed, Something we were happy about as it meant we could get used to the car, it was a fun section with the 1st Spectator point of the night, when we approached it looked like the Cilwendeg crowds had arrived, there were people everywhere, it had to be the place where it didn’t go quite to plan for us with the car understeering straight on, but as a whole this was going to give an idea on how the night was going to be, flat out revs from every slot.

Next we headed for the Pont-Y-Cim section which started on the tarmac white next to the A-road and had a short 3-mile loop round to finish near Aberdesach, at least 6 Experts cleaned this section but it did catch a couple of the top 10 out, Steven John Williams/Paul Roberts (Escort Mk2) dropped 5 seconds and Steve King/Andrew Sharley (BMW Compact) dropped 1 minute 21 seconds.

The next section started at Clynnog-Fawr and ran almost to the bottom of map 115 around the edge of a hillside before coming back north to cross over the A487 at the start of a little sting in the tail end of section around Nebo, although this was timed to the minute so most top crews didn’t drop, it still was a challenge with a impossible hairpin being very tight and some tricky slots/roads.

TC9 started nr Groeslon and ran through some very tight and tricky lanes to finish at Penyffridd, this section was 3.5 Miles in length and only contained 2 Passage controls (1 being a NAM Triangle) and 1 code-board, however this section ran past Llion’s home so we attacked the section well and was nice to just call out controls more than corners (and keep him on the road and not on a hedge! Despite his best efforts!) This section was to claim Mei Jones/Daniel Jones in their Astra, retiring soon after PC25, this also caught out Wyn Owens/Jenny Evans (Escort Mk2) as they made a wrong slot and dropped 2 minutes 44 seconds. We went on to clean the section by 30 Seconds. The leaders at this point Iwan Pritchard/Gwawr Hughes (Escort Mk2), Kevin Kerr/Max Freeman (Escort Mk2), Ian ‘Dude’ Roberts/Dale Furniss (VW Golf) & Llion Williams/Jon Hawkins (Escort Mk2), all of whom were clean to this point, 1st of the competitors who had dropped time were Gareth Williams/Alan Jones (VW Golf) who were on 12 seconds dropped.

Quickest Semi-Expert on this section was Chris Farrell/Arwyn Williams (Civic) who cleaned it however Farrell/Williams had picked up 2 minute early penalty on the last section dropping them down the leaderboard. The class leaders here were as follows: Endaf Jones/Ilan Rhys (Corsa) on 2m 22s, Parry/Parry (205) on 2m 32s & Roberts/Jones (Escort Mk2) on 3m 14s

TC13 to TC14 was up next running from Bryn Bras down to Llanberis along a narrow yellow, this was a tricky section with a lot of corners after crests and steep drops off the road all unfenced, we took it easier on this section preferring a finish with a straight car and big smiles to a dented car going for a result. As a result of this we dropped 13 seconds again the 3 leaders (Pritchard/Hughes, Kerr/Freeman, Roberts/Furniss ) cleaned this section with Williams/Roberts (Escort Mk2), Ken Jones/Ianto Fon Jones (Escort Mk2), Chris Philips/Dion Bee (205), Arwyn Hughes/Gareth Jones (205), Robert Williams/Merfyn Williams (Chevette) & Parry/Parry (205) also cleaning it.

A short neutral led to TC15 which was a slack section leading to another dropping section, this was supposed to be easy however fuel issues and a spin/stall cost us some time meaning although we cleaned it we started the dropper around 5-6 seconds later this didn’t help our rhythm in this section and we had a costly overshoot of a slot in the middle of the section, it ended after a small tarmac white changing your approach to TC17. We dropped 40 seconds here but again the 3 leaders cleaned it, also cleaning it were Williams/Roberts (Escort Mk2), Steffan Llewellyn/Dylan Jones (Corsa) & Geraint Jones/Carwyn Edwards (205).

There was 1 last slack section to go then into Petrol, Most crews cleaned it and at Fuel Halt the leaders were.

The 2nd half started at Halfway Bridge and had a slack 1st section, this lead into the 2nd section, this ran alongside the A55 from West to East using a twisty yellow on the side of a hill, the Pallet in the road was an unusual sight but didn’t cause any issues. This section was to be the dropper of the night and this was the section to decide the result of the rally! Kerr/Freeman were the only crew to clean this difficult section which consisted of tight corners and narrow roads with open hill sections, also in the section were 2 Codeboards, the only crew who received a penalty for them were joint leaders Roberts/Furniss who failed to get them signed for at the next manned control, they did however score a good time of 5 seconds dropped. The other leader from petrol, Pritchard/Hughes had a clean run however dropped 7 seconds dropping them to 2nd place behind Kerr/Freeman. We again took it cautious here aiming for a finish at this point, regardless of result and dropped 27 seconds claiming 6th Fastest on the section.

The Semi Expert pace was strong as ever and fastest on this section was Jones/Rhys (Corsa) on 25 Seconds, with Roberts/Jones (Escort Mk2) just 1 second behind and Williams/Williams (Chevette) a further 2 seconds behind Roberts. This meant that Jones/Rhys still lead the class and Roberts/Jones jumped up into 2nd with Parry/Parry (205) falling to 3rd.

The next section was a long one starting from Landygal through the ford and through several miles of lanes, it was slack for most people, that was until we found the road blocked by another competitor who had broken a wheel and damaged the car near Waen Wen. We rejoined route missing PC42 which was inaccessible due to the blockage. Even with this issue and a quick wrong slot we cleaned the section by 1m 30 or so. Next section was again a tight one with only 4 minutes to complete a very narrow section down tight lanes with several 90 degree bends and a white which although was tarmac had some large rock filled banks either side! Again we pushed and caught Geraint Davies in this one towards the end, however just before the Give way near the Finish control we hit a rock bending the wheel and causing a Puncture, with this we dropped 7 Seconds claiming 4th Fastest. The 3 crews ahead had all clean this Section, they were Pritchard/Hughes (Escort Mk2), Kerr/Freeman (Escort Mk2) & Williams/Hughes (Corsa).

The Semi Expert pace had picked up further with Roberts/Jones (Escort Mk2) dropping 8 Seconds and with a repeat of the last dropper Williams/Williams (Chevette) were a further 2 seconds behind Roberts. But drama was to strike Jones/Rhys (Corsa) who hit a ditch between here and the finish ending a good run. So Williams/ap Thomas (106) were 3rd quickest on 23 Seconds.

The Novices were having a bit of a shake up with losing Ellis/Jones (206) in an accident on one of the last sections, Owen/Jones (205) were very quick on these lanes and dropped only 23 Seconds, this was 24 Seconds quicker than David Roberts/Aaron Renshaw (Corsa) who dropped 47 Seconds and 45 Seconds quicker than Lewis/Jones (Starlet) who dropped 1 Minute 8 Seconds. But bad luck was to come for the latter crew who dropped 7 Minutes on the last section, dropping them from a class win down to 3rd in Class

The last section was a run down to Caernarvon for a run alongside the Menai Straight, this was an easily cleanable section and again a road Llion knew, so for me it was a sit back and relax moment just noting down the boards and enjoying the ride, drifting out of the last slot grinning like idiots just having a craic. We cleaned this section by over 3 minutes, just a shame the rally ended there. I would have loved another 100 Miles!

Thanks to Huw Gwyn Jones and the team for organising a cracking rally and all the marshals who made it possible, lovely sections with good controls and roads making this a must do event next year for any crew wishing to do a proper North Wales event. I must also thank Llion for an awesome spin in a lovely Mk2 and despite never driving an Escort before took to it well I’d say, talented in both seats!

The overall results are: