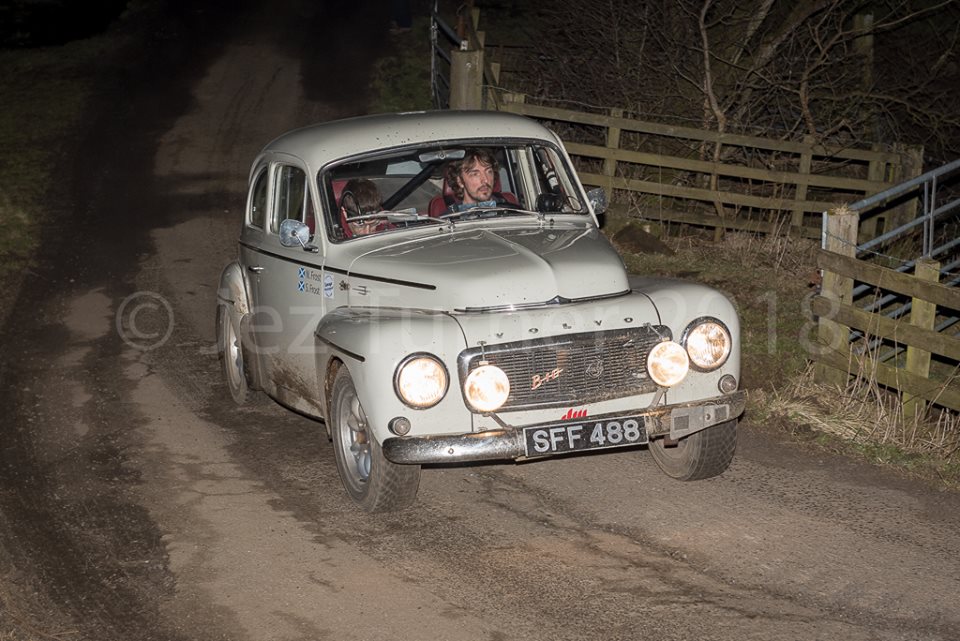 This was the 2nd year of dynamic but diminutive duo of Jonathon Webb and Ali Procter organising and it turned out to be an absolute cracker. A strong entry included previous winners Hemingway/Collis, Newby/Waller in their new Proton and Featherstone/Heriot in a very smart Fiesta ST. Sam Spencer had a scare mid-week when Jon Bossen’s car wasn’t ready; recent podium finisher at the Bruce Robinson Paul Rowland and his Mivec-powered Proton stepped in.

The other side to this event was the Historic category, where Tony Harrison and Paul Taylor brought the big Peugeot 504 to compete with a wonderful Triumph 2000 and a brace of Anglias. These cars were seeded in with the main event to keep marshals on their toes. I was navigating in a familiar car, my father’s Volvo PV544, with an unfamiliar driver, Dan Willan. I’m still not quite sure what wine was dished out in order to secure the use of the car, the only thing that is certain is that there must have been plenty of it.

Limited plotting at sign on, although Beginners were provided with a marked map to assist in their enjoyment of the evening’s sport. Us Experts were up for a night of full plot and bash and given I made it 1.5miles in the prior year before the crown wheel imploded I had no reference on how the event would play out. Competitive straight out of MTC1 with my nerves high and after being waved into the first control I checked Dan in 30s early at the 2nd by passing the board, stupid mistake with more to come!

With no sector times at the time of publishing I can only assume that most crews cleaned the first few controls although the whites had the front end of the Volvo jumping and showing up the limited travel available.

The 2nd selective started after a cheeky neutral slot south of Hexham which Dom Mctear and Matt Broadbent missed just after we’d allowed them to overtake and re-take position, so we had a clean run behind Tony and his Peugeot, catching him before the end of the 3mile section. Although unbeknownst to me recording some mileages incorrectly from road signs, a unique feature of the event which removes the need for codeboards, and costing me a 5min penalty.

We then stumbled onto everybody’s favourite section, the photographer! Dan tried a handbrake, realised 56-year old drums don’t do lock and we serenely understeered towards the media, maybe not the look he was going for! Things got a bit better east of Bardon Mill where we nailed a hard to find white junction off an A road and overtook the flying Sirion of Steve Entwhistle and Nick Cooper who slotted in behind us. There they would stay until the end of the section as the Volvo showed them the way towards the moors.

The great thing about these moors is that they were reading as per map and I felt I could give Dan a good bit of information, until the ice appeared and that certainly wasn’t in the plan. Fortunately it was half way round a corner so I didn’t see it; driver’s issue that. The transport caught a few out with some NAM bends over crests and a few disappeared in the bogs, but thanks to the plucky Nova of Tomos Parry no-one remained there.

Up until now the handouts had been tulips, spot heights, grid lines and such like, enough to keep the navigator busy and remove some road calling. Now we were provided with a map of the forest and into the gravel we went. Sam Ambler and Seddy Sedgwick were marshalling the end of this section and after sliding the Volvo effortlessly for 10km we were pleased to get back onto the certainty of tar and head off to Petrol via RTC 16.

This control was a family affair with Mrs Procter manning the station and she provided a bit of a stinker of a handout. Pictures of the map with lines directing you through, but it was over 2 maps! With several junctions to accommodate we kept it together through Lanehead and onto Troughend Moor where we slotted onto a “yellow”, well it was represented as such on the map. It was brown and gravelly on the road with turnips everywhere in reality… it was here that Stan Featherstone in the new Fiesta ST starting struggling with fuel and limped the car back to petrol, costing them a chance at challenging for victory in the 2nd half. It was Rowland and Spencer leading the way at halfway with Matt Flynn and Rob Bryn Jones waiting in the wings.

We were soon underway again and intricate use of lanes around Wark saw most of the field cheered on by Hemingway/Collis retiring through illness. Saying I was gutted to see Sambo retire is probably the wrong word, but I hope he is back soon feeling better; he is the benchmark in the north right now. Selective 2 saw the unlucky Newby/Waller have farmyard troubles and they waved us into a quick slot right, although it’s more like sailing the Volvo into slots. Some great hairpins saw the back step out, driver enjoyment possibly, let’s be honest, passenger too, it’s what we’re here for.

With a final flurry around Wark we made our way long trip south on the A68 and hurried electrics were investigated since we’d lost all spots since petrol, somewhat of a disadvantage when your headlights are twice as old as you. TTC28 saw the shake-up as Rowland/Spencer dropped time with a dodgy junction and Flynn/Jones stormed into a lead which they wouldn’t relinquish.

The final two sections epitomised what the John Robson is all about; tight lanes with loads of PCs marshalled by friendly faces and then into Slaley forest for the finale. 4mins (if you were on time) of flat out fun, so much so we had to take a code board during a 4-wheel drift and we won’t have been the only ones.

Back at Derwent reservoir there were plenty of smiling faces where we enjoyed pie and peas since it was 3am and not 6am, the advantages of an 8pm start. Results processed by the team and Flynn/Jones take their maiden win with standout performances from Holmes/Holmes in 4th and 1st novices. Special mention to Louis Baines who after 3 years of scaring Kris Coombes in his 106, had the treatment dished out on him in the mighty Micra with a great 6th overall.

The Volvo took the spoils in the Hexham Historic, just under a minute ahead of the Peugeot of Harrison/Taylor although my 2 code board errors accounted for a fair bit of that (vs 1 for the Peugeot). The most impressive part wasn’t the driving of the loaned car, a new navigator and no spots, but 2nd overall on the 2nd half of the event 21s behind Flynn/Jones. Incredible pace, incredible noise (twin 40s) and big smiles at the finish, home for 6am rallying doesn’t get much better.

Thanks to Hexham and District Motor Club for keeping rallying alive in the North East. Great support from your members and marshals and I’ll be back for another go next year.

Thanks to Jez Turner (www.facebook.com/jez.turner) for all of the photos. Make sure you check out his page for more examples and for details on how to purchase yourself a copy!