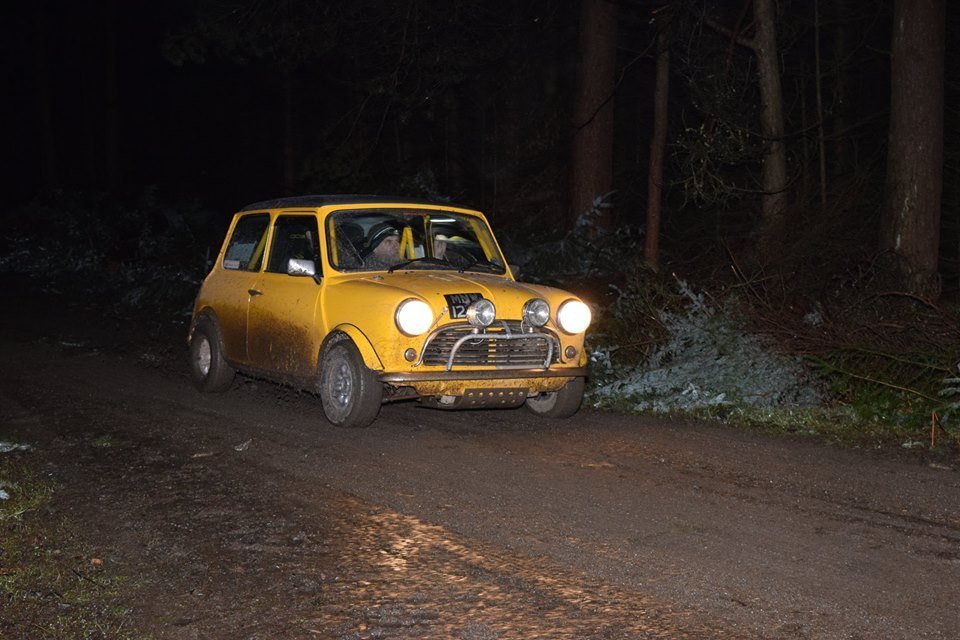 I’d heard that there was a new team organising the Hexham a few weeks before the official announcement, but when it was made public I had a message off Graeme Cornthwaite within minutes asking if I was up for it as Ali Proctor (one of his usual navigators) was jointly organising the event . I’ve known Graeme for years and we’ve competed together before, so another ride in the rapid 1380cc Mini seemed a good offer.

The new team of Jonathon Webb and Ali promised a no-nonsense, plot and bash navigation event on some of the best roads in Northumberland – and as they are both regular competitors who I’ve either competed with or against for years, I was confident they’d build on what is already a very well established event I’ve done numerous times. It is unfortunately the last night event in the North East and got a very strong entry in the modern event, but partly due to a lack of navigators, a less well subscribed historic section.

Come the afternoon of the rally, I arrived at a buzzing Sailing Club on Derwent Reservoir to find a very slick trailer parking operation, noise and scrutineering. There was the usual pre-event chatter between navigators (trying to double guess where we were going, when they last time some had been on these roads and assuming because I live about 15 miles from the start I knew a) where we were going and b) every single HTS junction and tricky road) and drivers comparing tyre choice and car preparation.

Then, it was a few miles up to New Ridley and the Dr. Syntax pub, home to many Hexham MC 12-cars and NESCRO AGM’s, for documentation, drivers briefing and the first lot of instructions at MTC1, an hour before the competitive section.

There were lots of guesses as to where we were going, rumours of tests all over the 2 maps, even people asking me where things plotted before I had the instructions – which as the historic were running behind the main field, we didn’t get until half an hour after car 1.

The pre-plot was mainly control locations, petrol and 2 off road regularities – one at Smiddy Shaw Reservoir (just south of the start venue) and another much longer section at the end, around Slaley Forest. Other than that, it was a massive game of join the dots – although you could make an educated guess at where some sections would go. It all plotted well within the hour allowed and we had plenty time to drive around the back of the Dr Synatax to NTC2 which was the start of the first completive section at a very civilised time of just after half 9 for us.

In the queue, I’d guessed we’d probably be going through the shallow ford, up to Stockfield, then back south and along Broomley white and sure enough, the first hand out was half a dozen or so of simple tulips which confirmed this – so off we went into the dark.

By the time we’d got to around the 9th junction – we’d made up the 3 minute gap we had to the end of the modern event and we in among traffic. Thankfully, they either pulled over, stopped to plot, stopped for code boards or just went the wrong way at junctions – so we probably didn’t lose too much time.

We bounced down the white at Shotleyfell Plantation following a couple more cars, then some more instructions which took us off on to map 88 briefly, into Co Durham , then down the very narrow and steep yellow just after Allensford and onto Muggleswick Harpins which are always a challenge whenever they’re used and something I’d already been chatting to a few others about from when they were used on Rally of the Tests back in 2009. I really felt on home ground here as it’s only about 10 miles from home and roads I’ve rallied on since the 1980’s (the first rally I ever did, the Shaw Trophy in 1986 used Muggleswick Common, but not the hairpins)

The off road regularity at Smiddy Shaw Reservoir was a bit rough for a Mini, with some pot holes that would have swallowed us whole, but we drove around the worst and didn’t drop too much time.

There was a relaxed run through Crawleyside and Stanhope into Weardale and thankfully, no trip through Stanhope Ford – we restarted just outside Stanhope with a run along the south side of the River Wear, through Ludwell and Brotherlee, before heading south over Westerhope Moor. This is where we found the limitations of a Mini on 10 inch wheels and low gearing, compared to a modern car with bigger wheels, brakes, more suspension travel and more gears. We were literally going as fast as the gearing would allow and modern cars were going past us and floating over bumps that meant us backing off. We gave up trying to keep up and eventually found them parked up plotting or stopped at code boards, so keep plotting at almost full pace and having a system that meant not stopping at boards for too long worked better than all out pace

From Newbiggin – we headed up past High Force, to Langdon Beck for the next competitive section which took us off the edge of the map “off map 92 and takes you back onto map 87 after a few miles, stay on the B road until you find your pace again” which was entertaining driving trying to find a footpath or landmark to know where you were.

Now in Cumbria – we had a short loop before petrol at Alston.

We seemed to be running with cars in the mid to late teens from the modern event (30 entries), and were just about on time and the first historic car to petrol. So, a quick splash of fuel, a coffee and a chocolate bar – we waited to see how the other historics were getting on. We heard that both Peter Humphries/Martin Phaff and Bob and Sue McClean had dropped around twice as much as us, so it was decided to avoid too much heroics and make sure we finished as I’ve been in this position before!

After petrol – another short link section to just south of Slaggyford. Sat and made an educated guess at where we’d be going (which was getting harder as we’d already been off the 2 maps we were told the event was on, twice in the first half). The marshal, Mac Holdsworth laughed and said “one of those is right” which was no help!

A series of grid lines to plot, took us straight off the A-road, over the South Tyne and down Tynedale on the very narrow and bumpy (in a Mini) yellow, and the slot right over the bridge to go parallel to the river. Hard work plotting accurately at speed, in a Mini on the bump stops. At times, I couldn’t get the potti on the map!

We then had a run up the A686 and back into Northumberland to the start of the next completive section which started just before Cupola Hairpins. Again – 5 simple tulips were plotted in seconds and showed a route down the hairpins at Oakpool, to Keenley, then over to Thornley Gate (all classic Hexham roads), then the next section started with a slot on to the white just outside Thornley Gate. We caught 3 cars and dropped quite a bit of time, but probably wouldn’t really have wanted to go that much quicker on road tyres and in a car with so little ground clearance.

We then headed south and thankfully a reroute avoided the very wide and fast flowing ford at Knockburn and up towards Sinderhope.

Then, down to Allenheads, for a run over Redburn Common, then slot left at Lintzgarth and up to Blanchland. It was then only left for a neutral for a few miles and a run around Slaley Forest.

We got there knowing, although we’d dropped a bit of time due to traffic and rough whites – the other historics were in the same boat and were unlikely to have made up over 6 minutes – so, although Slaley isn’t usually rough, it is very slippy and we didn’t want to end the night in a ditch. As once you’re in one, you’re not getting out in a hurry.

We headed off into the forest, hunting for grip from the road pattern Avon’s – bouncing along like crazy and seeing the car ahead of us over shoot the first RC, so we knew it was mega slippy. We caught the minute man shortly after and he did pull over quite quickly, but to be honest we were happy going at the speed we were going as there were a few conversations going on about how to avoid the big ditches and felled trees.

11 minutes and 7 RC’s later, we got the final control, had dropped a bit of time compared with most of the front running modern cars, but in one piece.

Just along to the road to the sailing Club for about 2am and burger and chips (a change from the usual breakfast) and the bar was even open.

Results started appearing quite quickly – showing we’d won the historic by a comfortable 7 minutes and probably just as much of an achievement, we would have been in the top 10 of the modern event despite being handicapped with traffic, queues at controls and some rough (for a small car) sections.

Jonathon and Ali did, in my opinion and everyone I spoke to, exactly what they said they were going to deliver – namely a no-nonsense, plot and bash navigation event that would be a challenge for both seats. Getting the use of 11 miles of Forest was the icing on the cake.

Huge thanks to the organisers as usual – great event that deserves to go from strength t strength. Well done to Richard and Sam on a great win on the modern event and thanks to the friendly marshals who made it all possible.

A cracking drive in a very well prepared car by Graeme – we never missed a slot all night, managed to be on the pace where top speed wasn’t critical, and held our own with the modern cars which is an achievement itself. Always a pleasure to compete with someone so easy going.

I’d seriously urge the historic crews who didn’t do it to get an entry in – there were no tricks in the presentation, the roads were suitable for historic cars and the forest was great. I just hope they build on it as it will become a must do event.

Round one of the NESCRO Challenge down – Saltire next weekend up in the Tay Forest with Andy Beaumont in the mighty, Holbay Rapier 120!

Thanks to Gordon Reid (www.facebook.com/profile.php?id=584495622) for all of the photos. Make sure you check out his page for more examples and for details on how to purchase yourself a copy!