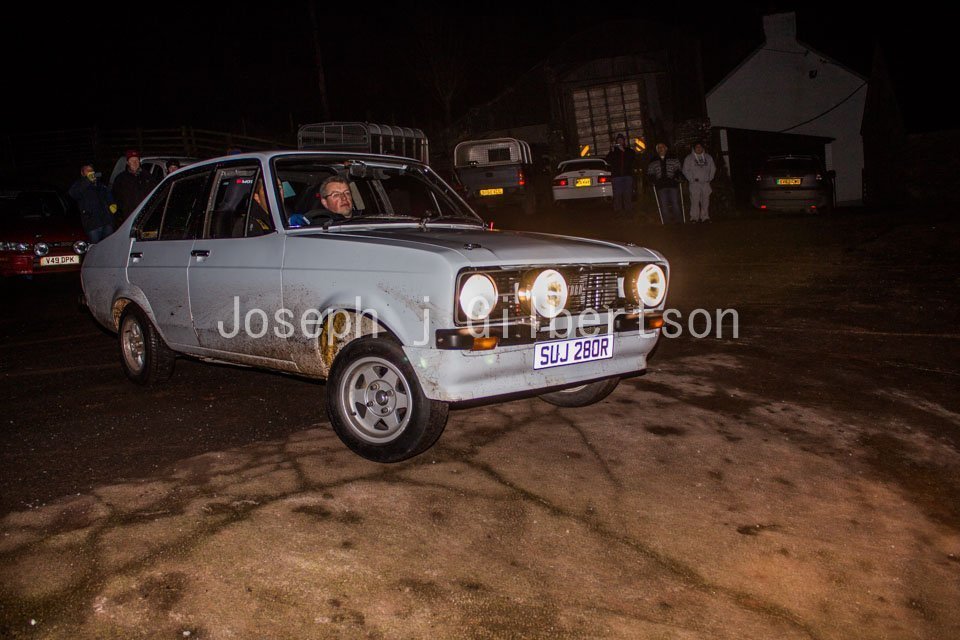 Ex-Motoring News Championship round, the Gremlin, was back on the calendar this year after a break from the area in 2016.

67 crews headed to Brecon on the 4th of March anticipating the reintroduced event.

Scrutineering wasn’t easy for some competitors with the new MSA tyres rules, with some crews being sent away to sort problems or some being told they wouldn’t be able to run at all. Preparation is key and rules are rules, so make sure you have your car sorted before your next event!

Brecon golf club saw the Gremlin rally starting from their headquarters again after trying a couple of other venues. The old A40 saw the 65 cars lining up again, it was a little overgrown since last time so was very tight in places, but everyone was in and ready to get going!

An hour and half was given to plot the 120 references and to travels a short distance down the road to MTC1. A few controls gave approach and depart directions that determined the route so a lot of concentration was required by the navigators to make sure no fails or large penalties were conceded during the night.

Midnight soon came and car one was at MTC 1 just south of Llanspyddid ready for the off.

Straight into the action with the first slot of the event being spectator point 1, slot 90 left, 100 90 right into 90 left. A small section following the Tarell and into TC1 and onto TC2 just before the A470/A4215 junction. 5 Crews were clean up to this point, Will Arrowsmith & Ceri Davies (Mk2 Escort), Stefan ‘DR’ Davies & Michael Gilbey (Mk2 Escort), Mathew Maidment & Paul Todd (205 GTi), George Williams & Jon Hawkins (Mk2 Escort) and Matt Barker & John Connor (206 GTi) with Steven Knibbs & Gerwyn Barry (Satria GTi) rounding off the top 3 in the expert class on 11 seconds.

Novices saw Elliot Stafford & Lewis Sim (Celica) in front on 1:37 in the lead with Joseph Richard & David Lee (Fiesta) close behind on 1:40 and Paul Morgan & John Jones (Civic) on 1:49 rounding off the top 3.

The next section started on Cwmbrynich Farm’s driveway which follows a white through the farm and out the other side onto a yellow. It was used on the Le Jog 2016 night section so I knew where we were going, it was quite handy calling hairpin right at the end of the fence. 90 left before the shed and then 90 right before the silo! On from there and heading south to a loop around Heol Senni and back up to the A4215 south of Defynnog for the end of the second section.

A whole 29 crews cleaned this section so I’m not going to name them all! 5 Novice crews also tied on the lead for the class dropping 1 minute across the whole section. There was a bit of a change in the top 3 overall in the novice class with Matt Rees & Rhys Griffiths (Corsa) moving up to second on 2:59 and Craig Harries & Sean Jones (MX5) in third on 3:03.

A quick trip through Defynnog and along the A4067 to TC7 just above Crai. Along the river to Danygraig and down to TC8 at the correct approach. Several people didn’t notice the north approach here and cut straight across from the East, the fails were scrubbed in the end but definitely one thing to watch for those crews in the future! Through Clasfynydd Forest picking up TC9 before heading up Blaenau Isaf white picking up 4 PC’s before TC11, this was the main dropper for the night! Down towards Pont ar Hydfer before slotting hairpin left and to Cwmwysg and to RC4. RC4 was in a large white layby on the left, when we arrived there was a 206 stuck deep so we dived up the inside and got stuck ourselves! 2 Minutes later we managed to get the four wheel drive out and attempted a few times to get Jonathan & Andrew out as they gave us a push but to no avail. Maybe something to think of for the organisers in the future, that it does get cut up by the first few cars and causes the car’s behind problems. A short trip along the riverside before TC12 which again was determined by an approach, most crews being sent the correct way in by spectators at the previous junction.

Quickest Semi-Experts were Clive Jones & Ross Truszkowski (Impreza) dropping 1:03 with both Box/Butch and Owen/Griffiths in second on 1:10. Robert Lewis & John Aspland (106) put in a great time of 2:12 bringing them up to third overall in the class.

Through Trecastle and into Sennybridge for the fuel halt. Positions at fuel were as follows;

A quick splash and dash and crews were leaving back on their due times, with some stranded souls left back in the car park! Through Pentre’r-felin and north to Llanfihangel Nant Bran. Crews headed north along a white and up to Blaendyryn and onto a 1:250,000 map handout for a tight tricky section. Back into the lanes and back down the other side of the river before another white just above Soar. Following the rest of the Nant Bran into TC18.

Second Semi’s were Jones/Truszkowski dropping 2:11 with Evan Shepherd & Darren Jones (Impreza) in making it an Impreza 1, 2, 3 on 3:11. Phil Bayliss & Josh Davison (Corsa) were close behind promoting them to second overall in the class with Steven Owen & Al Gwilliam (206 GTi) moving up to third as well.

Second novices were Lyndon Jones & Gordon Meakins (Satria), yes, Gordon navigating, on 3:31 and Harries/Jones rounding off the top 3 on 4:32.

Back past Brecon now and up to Llanddew for the start of the next section heading north east to Talachddu and then back down to Llanddew before finishing north east of Llandefaelog Fach. Another short quick section that all bar 6 of the remaining crews cleaned.

A long run up the B4520 through Pwllgloyw and Lower Chapel to TC22 east of Marthyr Cynog. Down to Battle End before heading north again through Pont-faen, around a couple LWR junctions to Pont Rhyd-y-berry and back up to the B4520 south of Upper-Chapel for the end of the section.

Up onto 147 now to TC28 round the back of Epynt. Along Waun Hirwaun and back onto 160 after 6 grid squares of 147 to a twisty section around Gwenddwr and across south of Crickadarn. A slot hairpin left too crews onto 161 along Cefn Gafros Common white and down to the A470 for TC 31 and the end of section seven.

A bit more of a competitive section this time with just Arrowsmith/Davies and DR/Gilbey cleaning the section. Third quickest were Williams/Hawkins dropping just 3 seconds. Rounding off the top three in the masters class were Maidment/Todd dropping 20 seconds.

Second expert were Nigel Davies & Dylwyn John (Mk2 Golf) dropping 8 seconds with Knibbs/Barry dropping 29 seconds in third moving them up to second in class above Davies/Davies.

Quickest Semi’s were Shepherd/Jones dropping 36 seconds and moving them up to second in class. Second were Box/Butch dropping 38 seconds with Jones/Truszkowski in third dropping 45.

Stafford/Sim were back on form dropping 1:27 to be quickest novices with Morgan/Jones dropping 1:53 in second and Mark Summers & Nathan Summers (Puma) in third on 2 minutes’ dead.

Down the A470 and past Brechfa Pool to Llandefalle for the final section of the night. Straight into a LWR junction and up Llandefalle white to Ponde. Up Llandyfalle Hill and across the common before dropping down to Trawscoed and back over to 161 for TC 36, the final competitive control of the night.

The moor roads proved pretty quick with 30 crews cleaning the final section. Unfortunately for Owen/Gwilliam dropping 6 minutes on the final TC dropped them from third in class and out of a chance of a pot, but promoting Lewis/Aspland who were putting in strong times all night, this year being their first year in the Semi class.

A few crews were announced DNF at the finish due to a controversial DSO location, something that all organisers may need to take a look at. They are there for safety, not to confuse and potentially ruin someone’s night/morning.

Well done to Brecon MC who put on a top nights sport for everyone to enjoy. Some quick roads around that area. Minimal use of code boards meant the event was a bit more flowing them some and I think it’s definitely an event to try for anyone! Well done for bringing the event back.

Well done to all the award winners which can be found here: www.britishroadrallying.com/gremlin-2017-results

With a DNF I’ll definitely be back next year to tackle the Brecon lanes again!

Thanks to Darren Morris (www.facebook.com/darren.morris) & Joseph John Gilbertson (www.facebook.com/joseph.j.gilbertson) for all of the photos. Make sure you check out their pages for more examples and for details on how to purchase yourself a copy!