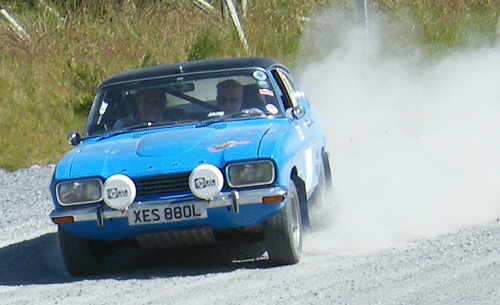 Raymond Rollo guided by top navigator Maurice Millar took his 1972 Ford Capri to win the inaugural running of the Highland Car Club Great Glen Rally on Sunday 21st July with some ‘spirited’ driving through the tests. A warm-up on the first test at the Kart Track set the scene for the rest of the day. As Raymond reported when I sent him the above photo “I told Liz (Ray’s wife) I had a fine canny day, but the photo blew that right out of the water!” The pair had a great day with Maurice quoting memories of “lots of dust and press-on motoring”.

Dave Spence and Roddie Main along with the team from Highland Car Club put on a great Targa rally, covering a 100 mile tour along the Great Glen toward Inverness visiting 13 test sites on the way, Under blistering sunshine that reached well over 25 degrees at the start in Fort William, the 24 starters set off. Plenty of water for crews and cars required, along with sunscreen and hats for the marshals, like myself, and club members Douglas Anderson and Ton Niven, to survive the heat and enjoy the action as you can see from a selection of photos taken at a couple of the test venues.

We arrived at the start which had quickly reformed at JJ’s Cafe, as used on the CCHMSC Bealach Na Ba back in June, on the Mallaig Road out of Fort William. Crews were putting finishing touches to their cars for scutineering whilst fuelling both cars with petrol and themselves with copious amounts of coffee and bacon rolls.

Soon we were off, and Douglas and myself were marshalling on the first test at the old Kart Track, just along the road from the start. This site had been used on the International Autoecosse back in June and is a great way to warm crews up at the start of a day.

Three laps of the Kart circuit were on offer and some of the crews used the test to blow away the cobwebs and settle their cars down for the long day ahead. Leading us off were Andrew and Scott Jamieson in their 1966 Vauxhall HA. Not a model that you see too often any more, but the Jamiesons’ car is a regular at classic events. Their performance on this first test led to a class T1 award by the end of the day. They certainly enjoyed their time in Glendoe where I met up with them again.

Being quickest is not all about foot to the floor and wagging the tail around, as was proven by the 2005 Corsa of youngsters Scott Morrison and Andrew Young who took the smooth and steady line to record one of the fastest times of the test. They would go on to repeat this technique at

later tests proving that smooth and steady wins the day, but that you can still have a lot of fun doing it. They also secured the class T4 award.

However, if you have an Escort Mk2 you just have to hang out the tail.That is what they were made for, and Paddy and Lewis Munro gave us all a show of how it should be done in their 1979 model, both at Fort William and Glendoe, leading to the class T3 award. Chasing them were Kenny cocker and Alan Patterson from Perth in their yellow RS2000 version. I hope they were caught on film as the BBC Alba crew arrived to video the action for a forthcoming programme later in the year on the channel. Don’t worry if you can’t speak Gaelic, they offer subtitles for us less knowledgable folks.

Now you don’t often see tigers in Scotland, at least not out in the wild. Well we saw not one but two Avenger Tigers in full throttle in Fort William, as they chased each other round the track, and through the dust in Glendoe. Brian Fraser and Allan Clark crewed the 1972 car whilst the 1973 model had Len and Andrew Morrison in the hot seats.

Club member Chris Donachie from Blairgowrie is normally seen in his Triumph TR4 but recently came across a 1974 Humber Sceptre which he told me had been lying in a garage for a more than a few decades in Tomitoul. He has successfully recommissioned the car with new brakes poly bushes springs etc and lightly breathed on the engine and it goes really well. The car warmed up at the Kart track,with Alan Aitken guiding him round  but when I next saw them in Glendoe they were really enjoying themselves, throwing the dust everywhere. Now all Chris needs is a Holbay engine and there will be no stopping the Sceptre!

As a personal fan of Spridget cars I closely watched the 1972 MG Midget of  club members Colin Rose and Bob Shearer.  This well sorted machine is devilishly quick and their performance on the Kart track and later in Glendoe shows in the photos. They must like the northern roads, having been over many of them in the recent Bealach Na Ba in June, though it was through the night then.

Misfortune visited Colvin Howie who arrived in a tidy Clan Crusader. We noted some pretty heavy blue smoke from the exhaust as it started the first test and by the second test at the Lime Quarry it had decided to blow a hole in the engine block! Ouch, and just after some serious work on the cylinder head and cam on the Imp sourced engine.

The second Corsa crew , Donald and Harris Wilson in their 1999 car were determined to have fun, but unlike Scott Morrison did not go for the smooth and steady line at all. On the Glendoe test Donald put too much lock on and nearly ran out of road. Thankfully he stopped before dropping into the 3 foot ditch at the side! I really expected to be looking at a tailgate pointing at the sky. 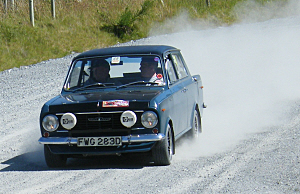 Jon Huffer brought his Triumph Doly for a blast, with Joe O’ Leary reading the notes. Jon had recenly fixed the steering rack when he discovered split aluminium fixing colletts, making the steering somewhat odd! No problems on the Great Glen as the Dolomite Sprint charged through the tests.

Still a few Nova’s around and Scott Macdonald and Nicky Anderson from Mayburgh crewed a 1990 model to have fun through the tests.  Not so many Mk1 Golf’s around either so it was great to see Paul Gitsham  and David Munro in a silver example.

No rally is complete without a mini somewhere, and Inverness man Scott McQueen can usuaully be found behind the wheel. With Andrew Mackinnon, also from Inverness, on the notes they pushed the little car through the tests. By time they got to the showground the hot summer afternoon temperatures were starting to get to the  car, calling for a bit of extra cooling. Off came the bonnet which seems to have allowed better airflow around the overheating A series engine, allowing them to get to the end of the last test, which was so long you almost required sat nav just to find the right route.

Dan Scoular brought his Porsche 911 Targa for a blast. Fresh from last weeks relaxing Summer Saunter in Argyll he and Cyril Craig, both from Aberdeenshire,  were able to kick up the dust. “Glen Shira last week had the tail well out” said Dan, and he had fun doing the same again, though the Porsche is pretty well planted with all its modern tech to help.

A complete success for the first running of this event. Everyone had a great time if the banter at the Fairways finish in Inverness was anything to go by. Hopefully we will see this event again the HCC calendar next year.

Just to show the modern cars can have as much fun. The Astra SRI of Stewart and Melani Hurst, and David and Margaret Straube brought a Suzuki SX4 diesel FWD.