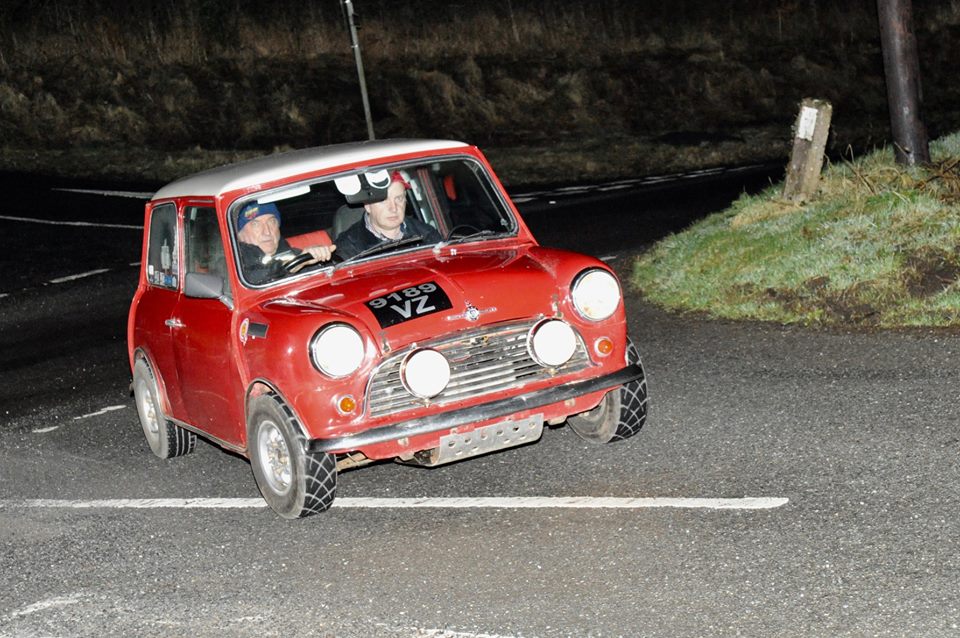 Grainger and Howard on Safari

A bumper entry of 29 ended up with 26 starters and what a super night for navigation rallying it was! Competitors encountered dry, twisty, bumpy roads under a clear starlit sky, and as an added bonus the entry list included a selection of 60s and 70s period rally cars. Classic Minis and Escorts always have fans jostling to use their phones to take pictures, and it was no different at “Elite Tyres” premises during pre-event scrutiny.

From the Irvinestown start, the Class 1 crews would tackle a 65 mile route to the North and East of the town, whilst Classes 3 and 4 competed over the first 45 miles of the route and finish after Time Control G.

Grainger and Howard were the first of the Experts to incur penalties and by Time Control E were trailing the penalty free crew of John and Jonathan Henderson by 4 marks. The “clean” run ended for the Hendersons when they dropped 2 marks into Time Control F, but this kept them in the lead, albeit by just 2 marks. The section from F to G would be their undoing and a string of penalties would leave them on a total of 13 marks, well behind Grainger and Howard who had just 6 marks.

In Class 3 for Novices, Tony Kelly and Aaron Johnston were showing that even an Audi A6 can make a good navigation rally car, making it almost all the way to Time Control C without penalty. They were joint leaders of the Class with William Strain and Robert Hall with just 1 mark lost, and behind them were Neil Fletcher and Rodney McCready another mark adrift.

As the night progressed, missed checks and wrong direction at controls took Strain, Fletcher, and Cookstown’s Bert Reid/Austin Burnett out of contention. It would be the steady performance by Dungannon crew Hayes Robinson and Keith Hall that would take the runners-up place in the Class, ahead of William Strain and Robert Hall’s Audi A1.
The Beginners Class would be the largest of the night with nineteen teams lining up to do battle. Local crew Bryan Og Gallagher, with Peter Jennings in the ‘hot seat’ for a change, claimed Class 4, but only just! They finished their rally a single mark in front of Father and Son team of Gary and Darragh Sheridan in their immaculate Vauxhall Nova Sport.

The Sheridans were comfortable Class leaders all the way to Time Control E with no penalties, but Gallagher/Jennings were near faultless on the last two sections to take the win. Third in this class was another Father and Son team, this time Mark and Kyle Thompson from Irvinestown in their Mazda MX5.

As the Classes 3 and 4 headed for supper after Time Control G, the Experts tackled three more sections. Although Grainger and Howard dropped 16 marks on the very first of these, disaster befell the Hendersons as they incurred a 30 marks penalty at the first secret check. The Hendersons were never going to overcome the gap created by that massive penalty but they did their best, losing only one additional mark in the closing sections. The Grainger/Howard pairing kept their nerve and ran out winners by some 19 marks, claiming a well deserved “home” victory.

At the finish in Mahon’s Hotel in Irvinestown Clerk of the Course, Drew Wilson, assisted by Event Secretary Wendy Blackledge, handed out the prizes and thanked sponsor Fabian McAleer of Elite Tyres and Repairs, and all the competitors and marshals who came out on the night to make the event such a success.