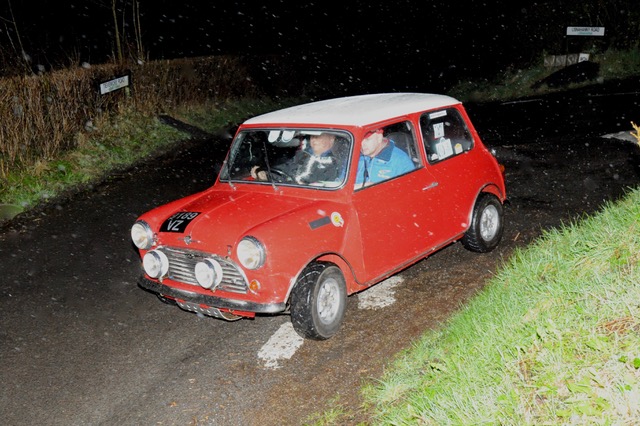 On a very wet night, veteran campaigner Benny Grainger with David Howard on the maps steered his immaculate Mini Cooper to a dominant win on the Elite Tyres and Service Erne Safari Rally. In absolutely atrocious conditions, not unlike that other Safari Rally [in East Africa], the Mini crew hardly put a wheel wrong all night and dropped a mere 8 minutes to secure overall victory.

The experienced husband and wife team of Ciaran and Rachel Carey in their reliable Nova was a distant second in Class 1 some 43 minutes in arrears! Ballinamallard navigator, David Johnston was on the maps with Sean Devlin in Sean’s latest acquisition, a Toyota MR2, which ran well all night despite the wind, rain and lots of ‘standing water’. They claimed second in Class 2 [Semi-Experts] and fourth overall. The Class 2 win went to John Henderson and Keith Somerville in a Toyota Starlet [which is now for sale!].

In the Novice Class, the winners (and sixth place overall) were Wayne and Ashley Boulton in their trusty Vectra with second place going to Billy Strain/Robert Hall in their Golf turbo-diesel. Class 4, the Beginners Class, was the biggest class of the night, supported by twenty crews in such diverse vehicles as Peter Jennings/Brian Hoy in a Mitsubishi Evo X, Mark McCaffrey/Conor Lappin in a Peugeot 405 and Bryan Gallagher/Gary McGlone in their Proton Gen 2.

Also pleasing for Clerk of the Course, Drew Wilson, was the appearance of several father and son crews including Gary and Darragh Sheridan in their Vauxhall Nova Sport, Mark and Kyle Thompson in their MX5 and William Graham senior accompanied by Willian junior in a Honda Civic. This along with other first-timers such as the Johnston brothers Simon and new Dad Marc, who sat with Craig Scallon [Ford Focus ST] and Christopher Corry [Ford Fiesta] respectively.

Bragging rights on the night fell to Marc who with Christopher Corry finished sixth in Class 4 two places above bother Simon. Mervyn Wilson is normally seen in a variety of MkII Escorts but for this event wheeled out the Mazda 323. He and his navigator Scott Thompson had an uncharacteristic ‘30’ after Time Control H which left them back in seventh place in class.

Mark McCaffrey/Conor Lappin claimed fifth in Class 4 with the 405 Peugeot, now a veteran of night navigation rallies, coping admirably all night with the conditions. Autotest man Jonni McDaid navigated Drew Chambers in their Peugeot 206 to twentieth overall on his first attempt on the maps.

But there was no denying that the star of the night had to be the crew of Grainger and Howard who had ‘cleaned’ the first half of the rally, not dropping any time until Secret Check 11, just after Time Control G, in their Mini Cooper.

At the finish in Mahon’s Hotel in Irvinestown, Benny gave credit to Clerk of the Course Drew Wilson and his EMC team for running such an enjoyable and demanding rally, with great roads and with challenges to suit all competitors from the ‘Expert’ to the ‘Beginner’.

Wilson finished by thanking all the marshals for manning the thirty-five controls on the night, the twenty-eight crews making this entry the largest for some time for the Safari and he hoped this would continue for years to come. He paid special thanks to Fabian McAleer of Elite Tyres and Service for their sponsorship and use of their premises for the Start and Scrutineering.

This has to be ‘grassroots motorsport’ at its best: with no competition license needed for the Beginners Class, an entry fee of just £20 and you can come along in any privately registered roadworthy vehicle. Next event is Dungannon on Friday 10th with Cookstown on March 31st and Omagh on April 7th. See respective facebook pages and websites or www.anicc.org.uk for further details.