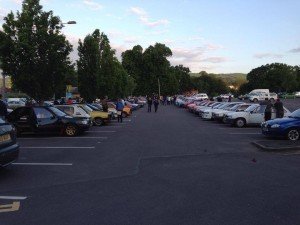 Newtown & District AC’s Eagle Road Rally 2014, held on the weekend of the 31st May/1st of June had a brilliant turn out of 70 cars all ready to take on the challenging lanes of map 136.

For me, this was my first time competing on the Eagle, never being on this map turned out to be quite a eye opener by the end of the night! This weekend I was in with Daniel Richard’s again after our poor run on the Night Owl (breaking a borrowed car on the first special test). This time Daniel had is newly built Escort Mk2 ready ‘MOO’, what a beautiful car it was! Very clean, all singing and dancing running a 2 litre pinto, my office for the night was very tidy and it was a privilege to be in the car! Unfortunately we had problems at scrutineering with a nut missing from the carbs, but a second set with another bolt one was soon arranged to be on it’s way and be fitted while we were plotting.

The route was handed out at the same time for the first crew in each class to give the lower classes a little more time to plot, thanks to the lad who jumped in to read out the grid references as the carbs turned up at the same time and Daniel and the crew got to work fixing the car ready for the night (Never caught your name!). Thanks also to the guys for bringing the spare parts down! It was almost game over before the start! We rattled through the plotting and turned out to have over an hour to wait until we were off, a little bit of waiting around but it seemed a lot more relaxed then some events. And then before we knew it, we were off!

The crews headed along the A489 towards Llanidloes before slotting left just below Caersws to head down to TC1. The route was brilliant and ‘on it’ from the word go, having a hairpin left almost straight away and up to RC1A with a NAM diagram. The route headed towards Stepaside before heading southwest to a ‘follow arrows’ section through a farm at PC1F. Unfortunately for us this is where our night started to go wrong, with the instructions of follow arrows we were unsure of where the PC was in the farm, and before we knew it we were at the end, not seeing anyone who looked like they were a control. We were so confident it wasn’t there we presumed it was missing and headed on, but it turned out it was in there and somehow we were one of only 2 crews to miss it, beyond me where it was, but that’s how it goes sometimes!

Another short sprint up towards Stepaside and then back down south before following the lanes across to the A483 below Newtown and into TC4 at the end of a nice smooth(ish) white. Richard Jerman & Lowri Davies were quickest through the first section only dropping 30 seconds with Ian ‘Dude’ Roberts & Gwawr Hughes only 24 seconds behind in the Mk2 Golf. Lewis Morgan & Dilwyn John rounded off the top 3 only 3 seconds behind Dude/Hughes. Quickest Semi’s were Huw Tagg & Michael Williams with 2:18 and quickest Novices were Ieuan Thomas & Daniel Jones dropping 3:29.

A trip down the A483 then took the crews to TC5 just outside Llandabarn Fynydd and almost straight into one of the long whites of the event. Then up to Little House Farm for a long few sections of whites through a couple farms on both sides of the road. For us the second group of sheds on the higher side of the B4355 caught us out and the back end stepped off the tarmac and into a wet field. Stuck! We were here for a good 4 or 5 minutes, luckily some nearby spectators heard us and came over to help push, we finally got out and soon got spinning again, but with a few extra minutes behind!

The route then headed north before looping back south to the B4355 to Felindre and then back north to a few nice fast sections. The route hopped off 136 ever so slightly but a A4 handout of the extra map was given at the start (a lot better then bringing a whole other map just for 1 give way!). A quick jump across the A489 and then up through several 90’s before heading east towards Newtown and into TC12. This is where we slightly dented MOO, getting a bit of a tank slapper through a 90 and catching the front end on a bank, nothing that can’t be fixed though! Jerman/Davies were quickest again in the Mk2 Escort dropping 2:15 with Nic Morris & John Tomley second quickest with 3:16 and the Impreza crew of Andy Davies & Lee Taylor just 2 seconds shy of them. Quickest Expert crew was Morgan/John again dropping 3:23, Semi-Experts Jamie Jones & Jonathan Kennedy were quickest in class dropping 3:35 and the quickest Novice class crew were Christopher Farrell & Mark Thomas in the Honda Civic with 6:57.

After petrol the crews were faced with the first test of the night, a short sprint up to some hairpins around some bales, a few 90’s including some in and out of cattle sheds (the cows weren’t bothered at all!) and then up the farm track to a couple other hairpins and into the finish. Quickest through were Andy Price & Geoff Lowe in the Suzuki Swift dropping only 13 seconds! With Adams/Smith second quickest through dropping a minute, the top three were finished off by Jerman/Davies and Jamie Wilson & Andrew Richardson both with 1:06. Quickest novice crew through were Farrell/Thomas with 1:21.

After the test is was straight into the lanes with the finish of the test also being TC16. Some nice smooth fast lanes down to the B4568 and then back up towards New Ho where another section of ‘follow arrows’ took the crews through another farm. Then the crews followed a very long grassy white above Bwlch-y-ffridd before heading north around Tregynon along a tight NAM road. Heading over a tight bridge followed with a 90 left 90 right the competing cars slotted left before Llallugan before heading to TC21. Dude/Hughes cleaned the section with Davies/Taylor, Gwillym/Jones, Hywel Davies & Dafydd Evans and Reian Jones & Ceri Davies all only dropping a minute. Richard Williams & Alex Crowley and Lloyd/Lloyd both dropped 1:10 being quickest in class 2 with Jones/Kennedy quickest in class 3 dropping 1:25. Quickest novice was Mason/Roberts dropping just 2 minutes in the Nova.

A short neutral section took the remaining 51 crews through Cefn Coch and up to TC22. A 90 left over bridge soon greeted the drivers before heading up to Ystrad Uchaf and then twisting its way down to New Mills/Felin Newydd avoiding a young farmers dance (Yes, caution YFC was plotted!). After TC24 the route went offroad down the edge of a field into a deep rutted track which caught us out, bellying the car out with the rear wheels in the air. After around 9 minutes of trying to budge it Huw Tagg and Michael Williams arrived behind us and gave us a hand, swiftly followed by Carwyn Adams and Richard Smith. Thanks for helping us out guys!!! Hope we didn’t hold you up for too long. The route then headed to another farm with ‘follow arrows’. This one was very wet on the second half and as you can probably guess, we got stuck! Luckily for us Mark Jukes & Dafydd-Sion Lloyd were already stuck there so they gave us a hand pushing the car out, sorry we didn’t help you guys but I told Daniel not to stop because we wouldn’t have got going again, I even ran the rest of the white up the hill to make sure he kept moving!

The route then headed north along a few NAM roads before crossing the B4390 and up off 136 onto another printed map. One more follow arrows farm and then back into the lanes down to TC26 which was the final TC before the final test. I was glad to be honest as the sun was starting to come up and it was starting to get a little too light for my liking! Jerman/Davies were again quickest through here dropping 1:48 with Davies/Taylor and Dude/Hughes dropping 3:06 and 3:07 respectively. Quickest Expert crew were Alwyn Passant & Denny Harris dropping 3:23, quickest Semi-Experts were Ben Lloyd & Matt Rees dropping 3:54 and quickest Novices were Hart/Williams with 5:20. Just to add, Jones/Kennedy’s good run while leading the Semi-Experts came to an end when they picked up a fail at the final TC in the lanes!

The final test was just north of Abermule/Aber-miwl which started in a field before heading up to a farm with several hairpins in and out of sheds before finishing at the end of the farm track. As predicted Jerman/Davies were still on fire at this point being quickest with 1:44, Davies/Taylor managed to get the barge through just 10 seconds behind with Williams/Crowley just a second behind on their late push. Quickest Semi-Expert were just 1 second behind them, Jones/Kennedy, no doubtfully a little disappointed about missing the previous TC. The quickest Novice went to Hart/Williams in the Golf with 2:07.

And that was it. The Eagle was done! Well done to Newtown & District AC for putting on a cracking route, using loads of NAM roads to keep to drivers on their toes as well as several farms and tricky triangles. A brilliant rally in my eyes! We need to Jack the Escort up a little bit and swap the tyres over and then MOO would have be brilliant. Thanks also to Daniel Richards for the spin in his lovely car. A shame about the dents and scratches by the end, but I know he will have it looking gleaming for the next event he does! Hell of a spin, I think we would have been on for a good result if it wasn’t for our problems! Second quickest Semi’s through the first section. Thanks also to Alex for marshalling for us again, top job!

After my first Eagle, I’ll definitely be back again after a well organised and run event. I think they had a couple problems with marshals not turning up, but they managed to get Code Boards out before the cars came around so well done to all the organising crew! See you next year!