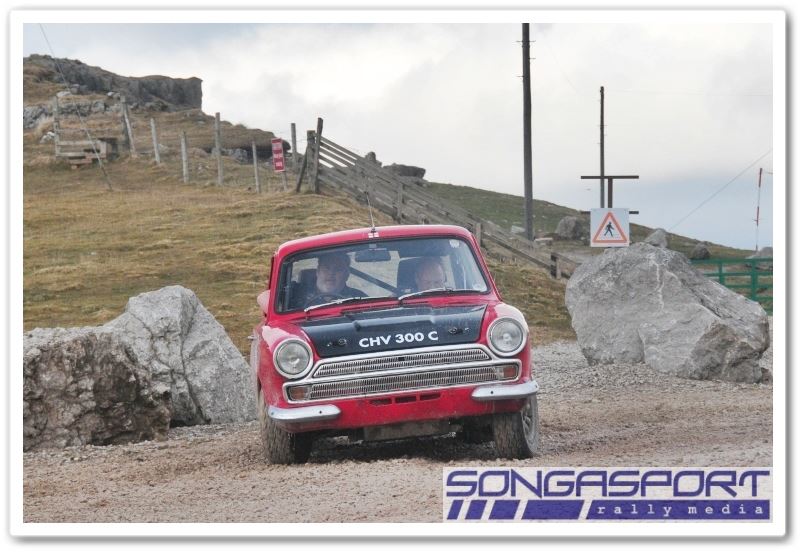 “Team Mitchell decided to enter the Devils, partly because the front end of the year was looking a bit thin with the postponement of the Illuminations and the rescheduling of the Rhymoor. Kirkby Lonsdale MC had made the sensible decision to open the event up to moderns by running on a navigation permit and in our endurance spec 205 we had a car which could cope with the rougher tests. It was good to see regularity sections fea-ture of the event too, I know they have their detractors, but to me they balance up the skill set requirement and make it more of a challenge for the navigators. True to form for this winter the morning of the event was somewhat dicey, on my run over from Yorkshire the weather got worse and worse, such that by the time I got to the Heaves Hotel for the start, there was about three inches of snow and it was still coming down. I had my doubts that it could run if it carried on and was glad we weren’t running Car 1, sweeping the tests clear of snow.

We were seeded at 11 according to the finals and scrutineered by that number, but at signing on there was a different list and we were now running car 29. The time cards weren’t num-bered but the advice was to put 29 on them too. There was a lot of speculation as to why the numbering had changed, it crossed my mind that it was to avoid the problem of the faster cars sweeping the snow, but that did seem a bit unfair on Peter Birtles and Richard Goodacre who drew the short straw at car 1, rather than their seeding at 12. However about 10 minutes before the first car was due out and announcement was made that we should start in our original seeded order, though I’m not sure if everybody heard…..!. The next interesting challenge was to get out of the car park and find the start control, the snow had made parking arrangement’s tricky and many had assumed the control would be at the gate as you left the hotel grounds, this meant cars were all over the place turning round and getting stuck, the ‘control’ was actually just a harassed Lady stood outside the door without a clock.

We finally got underway checking the Cars odometer on the measured mile, it actually seemed spot on which was a nice surprise. We had attempted to fit my Brantz trip into the car but the gearbox fitting I bought was incompatible and we had no time to fit a cable sensor. The first test was at Elm Tree Farm, better known as ‘Arthurs’ near Millness. A fairly tight loop around the farm buildings with a stop astride at the foot of a very sharp ramp, sensible move, I’ve hit my sump on that hard before now. The weather had warmed quickly and the snow wasn’t presenting any problems, the tight turns and lack of an efficient handbrake were though and a three point turn was required on a tight turn. We clocked 48 seconds, respectable but 6 seconds off the quickest, Dave Marsden in a Mk1 Cortina. Off we go then to test 2, the old Station yard at KL now a transport depot, to dodge around some more cones and the large and hard looking artic trailers, we nearly missed a cone on this (my wrong call) and had to reverse back dropping ourselves about 20 seconds.

Next port of call was Kirkby Lonsdale market square to pick up the plotting instructions for the regularities, we had the start and finish of both already and it looked very much like we would be visiting the forest at Old Park a few miles further north, the start of the first regularity was on the yellow a few miles south, the second started at the turn in to the forest the finish of both regularities was at the exit of the forest, both starts were ‘self start’ to save marshals (sensible move). The instructions we received in the market square looked straight forward enough just a list of map refs as VIA’s, except there was something odd going on. On the first reg, the penultimate VIA was the en-trance to the forest, the last Via (the finish) was the exit from the forest, but the third from last was actually in the forest. Ahh clever thinks I, we are doing two loops of the forest on the first regularity, then a third loop for the second regularity, what a great use of a superb piece of road. So we set off into the first section things going smoothly enough, pretty much zero penalty at the first IRTC, then into the forest keeping up the momentum at the second IRTC and on to the next control which, as I expected, was the exit of the forest, we quickly took the time and went charging off down the yellow to start our second loop, then I released the marshal had filled our time in for the finish, not the box above which would be the IRTC….. however maintaining 30 MPH on those roads, left little time to ponder this. But as we reached the control in the forest again the marshal gave us a time and wrote it in the box for the second regularity, commenting that I hadn’t filled the self start time in. ‘But I’m only on my second loop we have an-other to go’… ‘no you only come round twice mate’….. ‘eh wtf!!!’ Again with no time to loose we shot off to complete what was now the last section of the second regularity, I cheekily filled in the self start time and made sure we were early not late, (I had noticed a line in the instructions stating ‘no early penalties on the second regularity’!). I was a bit non plussed by all this, but thinking about it we hadn’t lost anything as the first regularity went fine and we just lost a few seconds from the second puzzling over the marshals revelation (18 to be precise).

Setting off to the next test we passed Tot and Maureen Dixon going the opposite way, this had me even more puzzled as I was really worried I’d missed something about those damned map references.

TEST 3 was next in Piggy’s quarry GS5993, a simple out and back around the rough quarry, then on to test 5 (4 was scrubbed). 5 and 6 were in the quarry at Shap we did them twice to make 7 and 8. Both good tests but we struggled to get a quick time with climbing starts, the 1360cc Pug sometimes feels like it’s got a Caravan on the back compared to the Clio or even my old Alfa GTV. Running nearly at the front we weren’t affected much by queuing, but it did look like it was going to take a lot of time to clear all the cars through the four tests. We found out this was definitely the case after the lunch halt at Tebay Truck stop (very nice too…!), when we were held up for half an hour at the start of test 9, Clarkes Farm. The test ran up the white through the farm and back out through test 7 on the quarry road at the top, except the rest of the field were still going through an hour and half after we had. I love Clarkes Farm the twisty white leading in to it is a cracking piece of road, though I’m not sure why the start was half way up this time, still it’s a great test and should have been run twice in theory. The delays, however meant the organisers had no option but to scrub the second run together with the second pass through quarry at the top.

This just left two more tests a couple of loops around the farm at Gilthwaiterigg just north of Kendal, a spot of Brain fade here saw Steve trying to go the wrong way around a cone first time, thankfully we stopped and reversed in time and just dropped 10 seconds or so. Our early position on the road and the cancelled tests meant we were back at the Heaves Hotel for the finish at around about 16.30.

After a lengthy wait, helped along by a cracking meal the results started to filter out at about 19.30, there seemed a good deal of confusion though. Were the numbers on the sheet, seeded numbers or running numbers?, nobody seemed sure of this especially as certain cars that didn’t finish seemed to have a full set of times and this seemed the case which ever numbers you used!. I wasn’t entirely surprised to see one of the regularities cancelled, but a bit disappointed to see it was the first not the second. It transpired the map references had been written in the wrong order, so only one loop of the forest was required the first time. In my view that error affected the second regularity not the first. There was however another rumour going about that Tot and Maureen had been given an entry list, not the route instructions in the Market Square, hence why they were coming back the other way after we had finished the regularity, their protest about this got the first one scrubbed, they found the second one and did it OK.

All things considered the event was still enjoyable, I like this format of rallying, having done a number of years in Historics, but I do feel KLMC are missing a trick with the Devils Own. There is such a resurgence of interest these days in the Motoring News championship, that the events synonymous with those great days need to start cashing in on it. The Devils Own could be made great again if it reverted back to the format it ran a few years back with daylight tests together with a night section, perhaps consideration needs to be given to combining the Lonsdale Belt and Devils together to take advantage of this?.

Thanks to Songasport Rally Media (www.facebook.com/Songasport) for all of the photos! Head over to their websites for more photos and for contact details to buy yourself a copy!