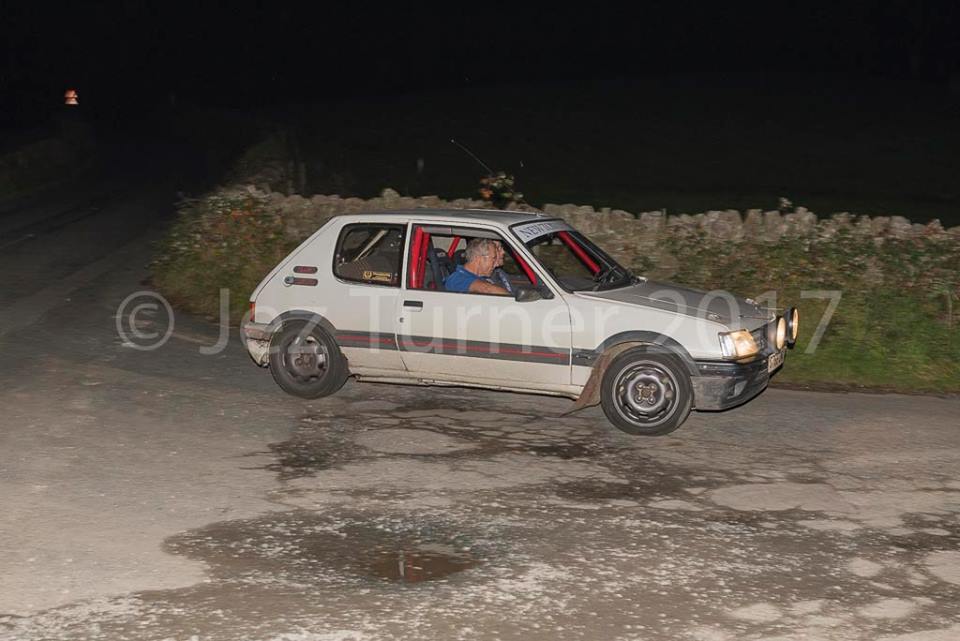 I never thought I would be going road rallying again after a very close call on the Primrose back in April – but I am happy to have got in a car again and thanks to Simon Boardman I had a thoroughly enjoyable night on the superb Clitheronian Rally 2017.

For those who don’t know, in the spring Neil McCarthy and I had a very big accident on the Primrose Road Rally just two miles into the event. We were on Longridge Fell at Kemple End and we were both fortunate not to suffer serious injury or God forbid, maybe worse. It was entirely my fault on reflection. I know the road well, maybe too well, after years driving over it on a daily basis to and from Clitheroe where I started my journalism career.

We were probably going just two or three miles an hour too fast for the crest where we took off and, on landing, skipped to the left, hit a banking and started the roll sequence which destroyed Neil’s Clio.

Thankfully the roll cage did its job and the Motordrive seats, with built-in head restraints, also proved their worth. At this point I must say a huge and sincere thank you to Tony Harrison of Bentham. A real friend in a time of need, Tony, his wife and their daughter stayed up all night and helped to recover Neil’s Clio and transport it back to Birstwith, near Harrogate, were Neil lives.

In order to help us, though, Tony first had to recover his own rally car from the event, after his Proton was struck down with an engine problem. He then had to get his recovery truck from Bentham and drive down to Blackburn with Darwen Services, where he met us and then follow us to Longridge Fell where it took a good 30 minutes to winch the Clio on to the truck before he took Neil and the car home. He must have been up for more than 30 hours before he finally got home.

If the SD34 Committee wants to present an award at next year’s annual presentation night to someone for a gesture beyond the call of duty, Tony is your man, in my opinion.

I expected the recovery to be a costly operation but Tony Harrison is one of life’s rare creatures, a generous gentleman with a heart as big as a bucket. I was up to his garage first thing on the Monday morning to pay him for his assistance and thanked him again. Cheers pal, you are a top banana. We love you!

But back to the Clitheronian Road Rally. I said to my missus after the Primrose accident that I would not go road rallying again – my wife was very happy to hear this – but the bug bites us all hard, doesn’t it? In August Simon Boardman phoned me. He was just seeing how I was as we are good mates and have rallied together for five years. We had a natter and then he just happened to mention that if I fancied doing the Clitheronian he would be chuffed to have me in the car with him. It took about three seconds to agree to the idea. The hard bit was telling Mrs Barnes but I misled her, saying it was just one of those slow rallies that I did from time to time. Bless her!

And that’s the story really. No pressure, a great rally on home turf, and the night was perfect. We started seeded at 15 and finished in 15th overall and eighth expert. I had said beforehand that I would happily take finishing 15th, looking at the quality of the crews competing.

Some of the lads have scary pace and commitment and it shows in the results. Young ‘Duke of Horton-in-Ribblesdale’, Seddy Swedgwick is a bit of a beast, isn’t he? He was leading at petrol. Phenomenal. It’s merely a matter of time now for the Sedgmeister!

As for us two old farts, we were just out to get round, no dramas, have a laugh and that’s exactly what we did. We had a slight drama before the start when the potti failed after a wire snapped. Luckily for us, Chris Woodcock had a soldering kit in the back of his car and Simon was able to fix it.

Without the potti I would have been snookered because it was quite an intensive and complex route, with plenty of double codeboard NAMs to keep us on our toes.

I kept Simon honest all night, we never went off-route, we just had a load of fun and savored the rally for what it is. B-R-I-L-L-I-A-N-T!

Intrepid Clitheronian organisers Paul Buckel and Steve Butler are good personal mates and they really know how to put on a road rally. It isn’t a case of blowing smoke up their backsides but I genuinely think the Clitheronian is the slickest, best-run road rally that I have ever done. If every rally ran to this format I would be out most weekends, wife permitting!

They put on the type of event that they would want to do themselves. They are seasoned competitors, they know what works, they know which roads to use and how to make the rally competitive and fun at the same time. They are well schooled in the art of rally organisation, they genuinely care about the sport. In short they are two of the sport’s good guys. No detail is left unchecked. The marshals are also well briefed so that there is no ambiguity, no misinterpretation of control procedures by individual marshals that can upset the apple cart.

It is straight-forward pre-plot, no-nonsense rallying with plenty to keep navigators busy and a demanding enough schedule to have the drivers working up a sweat.

I am sure others will write reports and give details of the route so I will not bore readers any longer. Suffice to say it was an excellent night, an excellent event, I was in excellent company and the Sunday night drinking session which then followed was also most excellent, with musical accompaniment from the likes of Sandy Denny, Led Zeppelin, Van Morrison and, dare I admit it, the Bee Gees! I thank you, one and all!

Thanks to Jez Turner (www.facebook.com/jez.turner) for all of the photos. Make sure you check out his page for more examples and for details on how to purchase yourself a copy!