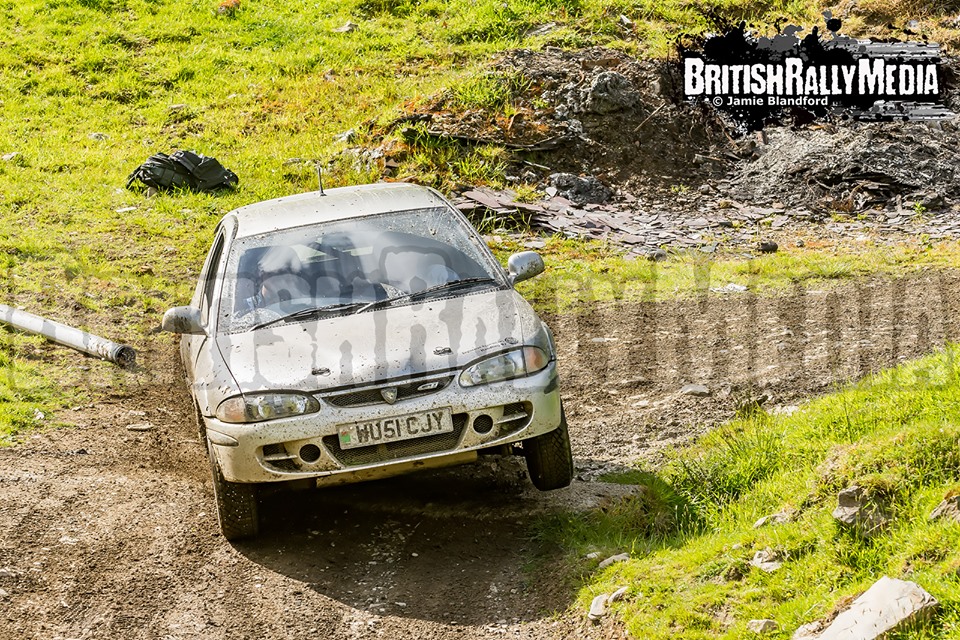 Llandysul Motor Club held their ever-popular Classic Tracks Targa rally on Sunday 26th May. The entry list filled quickly and in the end, some 74 competitors gathered at rally HQ, West Wales Rally Spares on the Llandysul Industrial Estate. Included in the entry running at car 1 was John “Tyres” Davies who had regular long-term navigator Eurig Davies. John is a previous winner of this rally and this year he would be competing in a Ford Puma. Behind them taking number 2 were Ceryth Jones and Richard “Ty-capel” Williams in a Ford Escort Mk2 who had taken the runners up spot in 2018 and this year looked to hopefully finish one place higher  At 3 was Steve Knibbs and Gerwyn Barry in a Citroen Xsara, both crew members have had great success on road rallies all over the country and were a crew to look out for. 4 went to Rhodri Evans and Gareth Evans in another Ford Escort Mk2 and rounding off the top 5 were James Davies and Marc Mayes in a Proton Compact GTi. James has been getting some excellent results recently in his Proton and was knocking on the door of his first outright win. Other entries to watch were car 6, Dewi Davies and Nathan Davies in a Vauxhall Astra Mk2. Dewi has excellent pace and always puts in impressive times so were capable of taking victory. Car 7 went to the newly built and immaculately prepared Ford Escort Mk2 of Chris Hand, who with Alan James was another crew that would surely be in the running on the event. Car 8 went to Cadog Davies and Michael Jones in Cadog’s recently overhauled Proton Satra GTi, whilst Cadog’s car is near factory specification he is a very capable driver and always gets the most out of it, and with Michael taking care of navigation duties they too would be a crew to keep an eye on. Anyone and everyone in the top 10 had the potential to take outright victory, such was the standard of entry.

The days competition was to be made up of 22 tests all local to the Llandysul area, made up of farm tracks and yards, and with a refuel halt at approximately half way through the day in Llanarth. The weather for most of the day was very wet with rain falling all morning, making conditions very challenging with everyone reported grip to be in short supply on the tests. The first few tests of the day included the use of cattle tracks outside of the villages of Horeb and Cwmdyllest. The opening one included a short straight section before a sharp 90-degree right hand bend before a climb up though a field and a tight uphill left-hand bend before heading down to the test finish. Here a number of spectators braved the weather to stand in the fields and watch the competitors wrestle for grip as they tackled this test. It was Bryn “Breeze” Smorthit and Tjay Lewis who took an early lead here in their Ford Sierra just ahead of the Escorts of Hand/James and Richards/Williams. Davies/Davies (Puma) and Davies/Jones were also in the running.

Then followed some tests at Pantmoch and near the village of Capel Dewi, where unfortunately Davies/Davies (Puma) booked in a minute early at the test start, receiving a fail which put them out of contention, a great shame as they were well within the running up until that point. Most competitors picked up around 30 seconds of penalties at both of these tests, with Davies/Davies (Astra) setting the standard on test 4 with 27 seconds of penalties gained and Davies/Jones doing best on the following test with 27 seconds. There was a real battle emerging with only a handful of seconds separating the first half dozen competitors.

The eighth test of the day was to be a track leading from Bwylch-y-fadfa through to Talgarreg and was a spectator location where fans could watch competitors as they bounced through puddles to the finish, with Davies/Davies (Astra) having a slight moment as they overshot the finish of the test and beach the Astra on some rocks, unfortunately this was later scrubbed from the event so it was over to Henbant quarry for test 9. By now the rain had stopped falling so it was at least dry overhead, but the tracks and tests themselves still proved to be slippery. Are you in to cars ? check Oneida bow for sale at forsale.plus at great prices. At test 9 it was Davies/Davies (Puma) setting the pace, only gaining 18 seconds of penalties. Hot on their heels with 19 seconds was the Proton of Davies/Jones who were really gong for it. Also doing well here were Davies/Davies (Astra) as they received 21 seconds.

Test 10 proved to be an unfortunate one for Davies/Mayes in their Proton, as the car slid off the road and crash landed in a ditch, both crew members were completely fine but the cars future isn’t so certain and a new shell may be required. A great shame as they were running within the top five up until that point. It was also eventful for Davies/Jones as they also spun here, thankfully Cadog managed to put the car into reverse and spin back around to continue, keeping time loss to an absolute minimum, some of Cadog’s auto-testing experience showing through there.

At the half way halt it was Hand/James that held a slim lead in the Mk2 Escort, having a penalty total of 5:18. Davies/Jones were 8 seconds down in second place, and rounding off the top 3 after an excellent first half was Smorthit/Lewis who were a further 3 seconds back again.

There were still plenty of tests still to run, including a spectator point at the very popular Pantsod Farm just outside of Synod Inn, here competitors traveled down the farm lane into the yard before going around the outbuildings and onward over a cattle track to the test finish. Here it was Dyfan Davies and Dafydd Evans down in the semi expert class that were quickest, putting in an excellent time and only receiving a penalty of 32 seconds in their Nissan Micra. Tests 13 and 14 were by Plwmp and Penrhiwpal and were then followed by test 15 at Gwernant.

Test 20 was at Glyn-yr-Odyn Farm which is always a popular test and includes a tight section around some outbuilding in the middle of the test on the farm yard. Following this test 21 was held at Cwmhyar which gave spectators a last chance to view the action as the test takes places in some fields visible from the road so a crowd always gathers here. Davies/Jones set an excellent time here of 35 seconds as they made a push for the overall lead in the Proton, also doing well here were semi expert pairing of Osian Jones and Rhodri Lewis who achieved a time of 40 seconds, a time that matched many a competitor in the expert class.

The final test of the day was Abercerdin and here again Davies/Jones were the pace setters with a penalty count of 17 seconds, this was matched by Hand/James in their Escort. This was closely followed by Jones/Williams and Knibbs/Barry who both managed 18 seconds. After this test had been completed it was over to the Porth Hotel in Llandysul for the results and awards, where it was declared that the winners were Cadog Davies and Michael Jones who took a 2 seconds victory in their Proton Satria GTi over the Escort of Chris Hand and Alan James, Cadog and Michael’s total penalty count at the end of the day was 10 minutes and 41 seconds, with Chris and Alans being 10 minutes and 43. Rounding off the podium were Ceryth Jones and Richard “Ty-capel” Williams in another Mk2 Escort. Their total time stood at 10 minutes and 50 seconds. Cadog has now joined the two-seat club by having victories in both sides of the car. The Semi-Expert class was won by Huw Morris and Natasha Morris who finished in eighth overall in their Ford Focus with a total time of 12 minutes and 55 seconds, and the Novice class was taken by Benn Lewis and Craig Nichols in a Proton Persona who had 15 minuets and 52 seconds.

It had been a very enjoyable day and many competitors looked forward to returning to Llandysul for more next year, the organising team had put on a very enjoyable event among some very challenging conditions and everyone at the finish venue had an interesting story or two to tell from their days exploits.