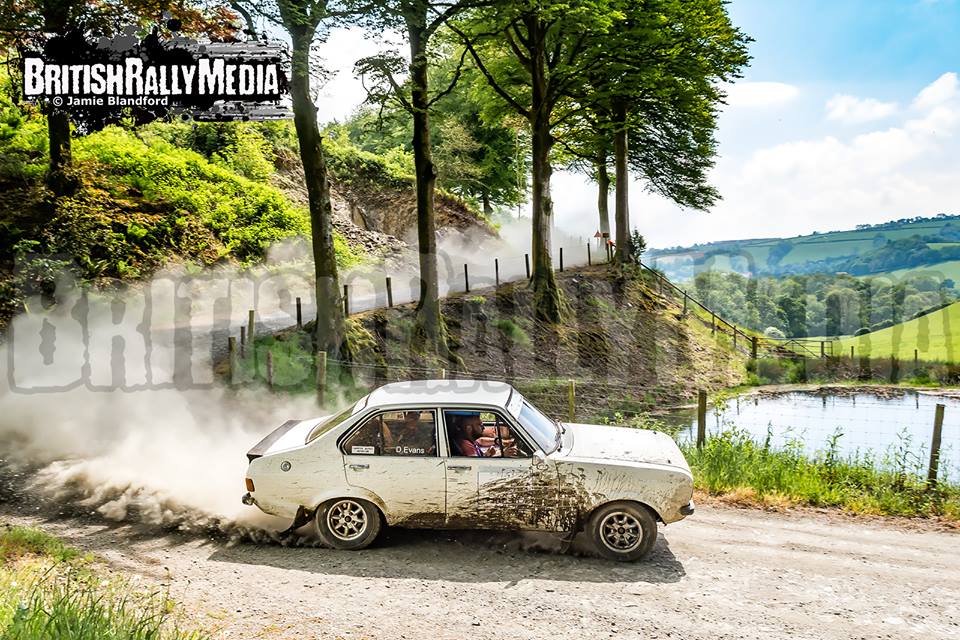 On Sunday the 27th of May 75 crews headed to West Wales rally spares in LLandysul to compete on the ever-popular Classic Tracks Targa rally. Targa rallies are open to road rally specification cars but as all the competitive mileage is on private ground, they can take part in the hours of daylight. This year’s route was to be very compact and all local to the start venue, with all the action taking place a few short miles away from the start venue, a great move which kept road mileage down to the minimum whilst still giving competitors plenty of competitive miles. All in there were 19 separate tests on this year’s route, with some tests being run twice.

With signing on and scrutineering duties taken care of competitors headed over to the first test of the day at Bronwydd. This test had a bogey time (minimum time allowed) of 1 minute and 42 seconds. Gethin Dafis & Ceri Davies (Impreza) took the quickest time dropping just 11 seconds. Then competitors headed off to Brynhaulwen, just outside of Penrhiw-pal. Many crews managed to match the bogey time over this test so they completed it penalty free. Then followed a test near Fronwen near Gorrig where James Mayes and Marc Mayes (Satria GTi) slid off into long grass and lost some 20 seconds trying to regain the road. The Semi-Expert pair of Ethan Davies & Matthew Phillips (Corsa) took top spot on this test dropping just 35 seconds.

Breeze Smorthit & Tjay Lewis (Sierra) and John Davies & Eurig Davies (Satria) were both leading after the first three tests with a total time of 56 seconds. In third were James Martin & Gerwyn James (Astra) on 62 seconds. Dafis/Davies were slightly in front on 61 seconds but four wheel drives were not eligible for overall awards on this event. Second four wheel drives were Jamie Jones & Craig Baker (Impreza) on 1:43 with Steffan Rhys Evans & Natasha Roberts (Impreza) very close behind on 1:44. Top Semi-Experts were Ben Birch & Ryan Hurrell (ZR) on just 1:09 with Williams Mains & Daniel Evans (Astra) in second on 1:14 and Davies/Phillips in third on 1:20. Novices saw Kris Clifford & Nathan Rees (Focus Estate) currently in the lead on 1:33 with Daniel Owens & Talis Owens (Micra) second on 1:43 and Sheldon Furby & Peter Littlefield (ZR) in third on 1:47.

Following this, competitors went over to Ffos Esgob just outside of Pren-gwyn where a spectator point was located so that fans of the sport could view the cars tackling the tests safely. The test had a bogey time of 1 minute. Dorian Evans & Arfon Griffith (Mk2 Escort) in car 1 were quickest dropping just 18 seconds. Test 5 was Cymdyllest near Pontsian, another Mk2 Escort was quickest on this one, this time the Novice crew Craig Warren & Nigel Montgomery setting a binding time dropping just 18 seconds. Test 6 was at Llanfair, just to the east if LLandysul and this one saw current four wheel drive leaders take the top spot dropping 17 seconds.

After test 6 Evans/Griffiths were at the top on 2:24 with Martin/James and Davies/Davies both in second on 2:34. Dafis/Davies were ahead of everyone on 2:16 in the four wheel drive class with Jones/Baker extending their gap at 3:31 but not by much with Evans/Roberts on 3:44. Mains/Evans had taken the Semi lead by now on 2:47 with Birch/Hurrell on 2:59 with Huw Morris & Natasha Morris (Focus) moving up to third on 3:18. Clifford/Rees kept their lead in the Novices on 3:27 with Owens/Owens still in second on 3:37 and Calfyn Jones & Dyfrig Davies in their Micra moving up to third on 3:52.

Test 7 took place just outside of Llangfihangel-ar-arth and here four crews topped the table, Evans/Griffiths, Ceryth Jones & Richard Williams (Mk2 Escort), Cadog Davies & Michael Jones (Satria) and Evans/Roberts all dropping just 6 seconds. Test 8 was over Cwmtywyll railway and most cars here managed to match the bogey time of 2 minutes and 30 seconds over this test so there was only one test left before the petrol halt, which was Glantwelly. The petrol halt then followed this test and so far, Evans/Griffiths were still in the lead on 2:30 with both Davies/Jones and Davies/Davies in joint second on 2:44. Dafis/Davies were still quickest on 1:23 with the battle for second four wheel drive heating up with Evans/Roberts jumping in front on 2:54, just two seconds ahead of Jones/Baker. Semi-Expert leaders were a similar sight of Mains/Evans, Birch/Hurrell and Morris/Morris on 1:58, 2:29 and 2:38 respectively. Owens/Owens took the Novice lead on 4:02 with Clifford/Rees dropping back to second on 4:06 and Jones/Davies on 4:49.

With everyone’s fuel tanks filled it was back to the tracks for more tests, with the tenth being near Gwarcwm. Davies/Jones and Dafydd Davies & Owain Rees (Mk2 Escort) were quickest here dropping just 2 seconds with the mighty Ford Ka of Keith & Julie Lane taking top spot on test 11 dropping 30 seconds. On to test twelve at Cwmcerrig cottages Chris Hand & Alan James (Puma) set the quickest time dropping 10 seconds. Evans/Griffiths were still leading with Davies/Jones in second, this time drawing with Steve Knibbs & Gerwyn Barry (Satria). Dafis/Davies dropped off the top of the overall times but still lead the class by a long way on 3:32. Jones/Baker had taken second in class back on 5:44 but Evans/Roberts were still close on 5:49. Mains/Evans had technical problems after the fuel halt dropping them out of the rally with Birch/Hurrell also dropping out of the top three. This left Morris/Morris to take over the class on 5:09, a good few seconds in front of Davies/Phillips on 5:34 and Daniel Morris & Elin Lewis (Puma) in third on 5:45. Owens/Owens kept ahead in the Novices on 5:39 with Clifford/Rees now only 1 second behind, Carwyn Iefan James & Joshua Western (106) had now moved up to third in class on 6:34.

The thirteenth test of the day was just outside of Pentre-cwrt, here Evans/Griffiths were quickest again dropping 35 seconds in their Escort. Tests 14 and 15 followed with 14 being at Bangor-Teifi and 15 at Penralltfachnog. Jones/Williams and Evans/Griffiths took quickest times on 9 and 47 seconds respectively. Davies/Jones damaged the bottom arm on their Proton on test 15 but manged to limp to the finish venue where they was able to qualify as a finisher as they had covered enough of the route, although they would finish well down the order. A great shame as they were well within contention of having a place on the podium. Evans/Griffiths were still at the top with a total time of 4:57 with Jones/Williams moving up to second on 5:41 and Hand/James now in third close behind on 5:47. Dafis/Davies had dropped back quite a bit now on 6:17 but still leading the class while Evans/Roberts and Jones/Baker battling it out for second on 8:20 and 8:32 respectively. Morris/Morris also had problems missing the three tests and losing their class lead, Davies/Phillips took over on 7:51 with Morris/Lewis in second on 7:54 and Birch/Hurrell in third on 8:35. Clifford/Rees had a very slow test 14 time dropping them out of contention with James/Western moving up to second 53 seconds behind Owens/Owens. Anwen Davies & Sioned Davies (Satria) then moved up into third in class on 8:31.

Test 16 was at Blanedyffryn and saw Evans/Roberts beat the bogey of 1 minute. For those who were still running test 17 was just outside of Horeb, quite a few cleaned with one before returning to the spectator point at Ffos Esgob for test 18 where Davies/Rees set the quickest time again dropping just 6 seconds. The final test of the day was at back at Fronwen and Martin/James took the quickest time with an impressive time of 2:46, 41 seconds ahead of anyone else!

With everyone gathered at the finish the winner was declared and once again it was Dorian Evans with Arfon Griffiths in the Mk2 Escort with a total time of 6:43. Second were Jones/Williams on 7:45 and Davies/Davies in third on 7:53. Daniel Morris & Elin Lewis took the Semi win on 10:26 with Davies/Phillips on 11:18 and Birch/Hurrell on 11:41 in second and third. Daniel & Talis Owens kept the Novice lead with an impressive time of 11:20 with James/Western in second on 12:29 and only 5 seconds behind, Davies/Davies in the Satria. Four wheel drives saw Gethin Dafis & Cari Davies comfortly take the win on 9:06 with Evans/Roberts taking second on 10:45 and Jones/Baker in third on 10:42 but with a fail. Results can be found here.

Everyone enjoyed the day and credit should go to the organisers of the event for providing an excellent and well organised event.