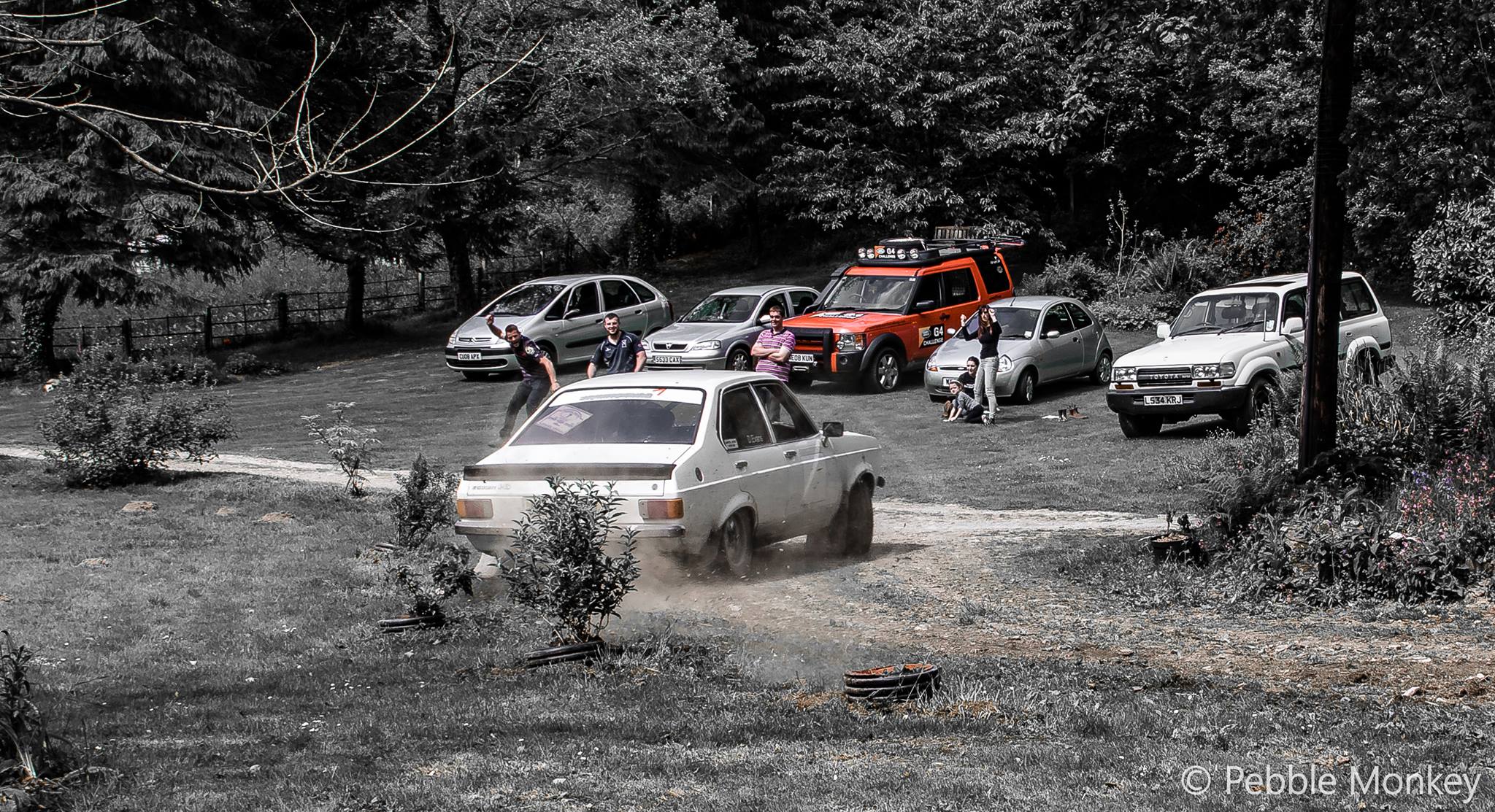 The bank holiday weekend of Sunday, the 28th of May saw a welcome return on the Classic Tracks Targa rally to the rallying calendar, a targa rally organised by Llandysul motor club is a little different to a road rally, where all competition takes place in daylight, and all on private ground, on farm tracks and private forestry’s (well, any private ground wide enough to fit a car down seems to be fair game!) With it being a local rally with a reputation for being an enjoyable day out it was no surprise to see plenty of names on the entry list.

With everyone gathered outside West Wales Rally spares down on Llandysul industrial estate for scrutineering and signing on, everyone was very excited for a day of top competition and with the weather being warm and dry the conditions were excellent for a day of motorsport. All were eager for the first test that took place in Croesllan.

On the first test, it was Dorian Evans & Arfon Griffiths (Mk2 Escort) who set the best time and only had 45 seconds of penalties, a great start to their day.

With almost everyone surviving the first test crews then headed over to Prengwyn for another test, before then heading towards Talgarreg area for more.

Novices Shane Goddard & Shaun Richard (BMW Compact) were on form on test 4 setting the quickest time of 0:34, a full 5 seconds ahead of anyone else! The Semi-Expert pairing of James Martin & Gerwyn James (Mk2 Astra) were also setting a good pace with the quickest time on test 5 of just 21 seconds.

It was onto test 7, which was at Pantsod Farm, there was a spectator point placed at this test and everyone seems to enjoy the action that took place as competitors dodged around barrels and sheds as they attempted to set a good time. Once again it was Dorian and Arfon who had the best time on this test (by one second!) with 42 seconds of penalties picked up.

From here crews then headed over to Llanarth where another test followed, this was to use the “white” road near Pencae that also featured on this year’s Bro Caron rally. It’s a technical little section that can be quite tricky to navigate round so must have been a nice change for everyone to tackle it in daylight.

Then followed a test at Tyddyn Du farm just outside of Dihewyd where a small track leading off the farm heads over to another farm, Bryn Cesig, it is a straight forward enough test with only a couple of tight corners along the track.

It was then over to Moyddin white for the next test which is another one familiar to many local motor club. Tanrhos then followed from here before the rally began heading back south to Capel Dewi and then a further three tests in the Pencader area. Once these tests had been completed it was time for a refuel halt in Windy Corner garage.

Evans/Griffith were leading with a total of 6:36 with Ieuan Evans & Lewis Morgan (Civic) in second on 7:22 and James Davies & Marc Mayes (Proton Compact) in third on 7:32. Leading the Semis were Martin/James with a time of 7:57 putting them eighth overall as well. In second were Owen McConachie & Owain Glyn Davies (Satria) on 10:17 and in third, Ethan Davies & Ben Duke (Satria) on 10:46. Novices saw Goddard/Richards at the front on 10:14 with Daniel Davies & Teejay Lewis (MX5) a further 12 seconds behind and Andy Davies & Stephen Davies (Celica) a further 18 seconds behind.

With everyone refuelled it was off towards the Alltwalis area where the first couple of tests of the second half would take place. Test 15 began near the marshlands near Pencader and finished opposite Bedw Hirion near Gwyddgrug. Martin/James set another top time on this test of just 10 seconds, 3 seconds ahead of the rest of the field.

The final few tests of the rally saw competitors take on tracks in the Pentrecwrt area, followed by Henllan, Rhydlewis and Gorrig.

Lee Cooper & Ross Truszkowski set an impressive time of 49 seconds on test 20 taking the top time. Unfortunately, on the final test a small fire broke out and caused them to retire.

Before long it was over to the finish venue, The Porth pub in Llandysul for a well-deserved pint (not alcoholic for those driving of course!) to await the results.

Evans/Griffiths had held onto the lead with a total time of 12:05, a full minute ahead of Evans/Morgan who held onto second. Third were Mark Lennox & Ian Beamond (Anglia) on 13:42 with Davies/Mayes slipping back to fourth with the Semi-Expert crew of Martinn/James taking fifth overall, a great drive by them.

McConachie/Davies held onto second in class with 17:10 with Daniel Williams & Jamie Graham (BMW Compact) taking third in class on 18:45.

Top Novice crew were Goddard/Richards on 16:42 which put them 13th overall with Davies/Davies in second on 18:26 and Davies/Lewis in third on 18:49.

All in all, it was a very enjoyable day out for everyone who competed and everyone had nothing but praise for the organisers and marshals who created and helped run the rally. Everyone left the finish venue with the intention of returning next year for more fun on the classic tracks.