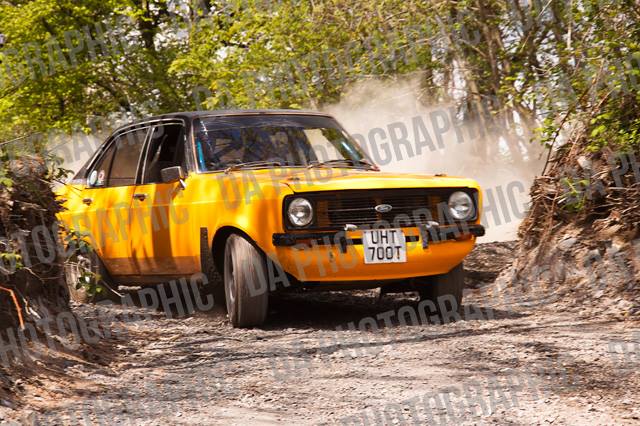 “Awesome rally, really enjoyed it! What a good job with the tests on Spencer’s yard Chuffed with 2nd O/A for first time in silly seat”

“Happy with 6th after 2 years in retirement!”

“The day started of early, we didn’t have a run but were Reserve 2 so wanted to get up there early just encase there was a slot that opened up! About 2 miles before getting to the start we had a call from the organisers saying that we were in! In class 1! Little bit of a jump from class 3 last year, but at least it was a run!

Turning up at the Jukes residence for the start and driving down the field to Noise Test, wow! You could see the roads across the valley and down in front of us and they looked awesome! You could tell that a lot of work had gone into getting the place sorted for us to blast around. The tractor going around spraying water was a relief after our last event, The Mytois!

After successfully getting through noise, scrutineering and signing on it was time to mingle! It wasn’t a good sight to see some crews turning up with a few problems already! A silver 206 with steam poring out of the bonnet in the queue for noise and a oil soaked absorption pad under a golf in the starting park, but I think both crews made it out in the end! We were also told that we were back down into class 2, just leading them all off, so not much pressure!

And then we were off! The style of the start venue allowed us to watch the first few cars go through the first test so we had an idea of where to go! And what a brilliant test! The drop from the top of the hill was quite a scary sight! I say sight, you couldn’t see the road at all and it descended at a hell of a rate! The ford was pretty deep so we took it fairly slow, unlike a few who were stopped just after with trouble! Glad we did! Test 1 complete, lost one side skirt but it was still slightly handing on, so went in the boot!

Test 2 was a bit of an eye opener to how rough the event was going to be! The Tigra is pretty low so the sump guard was taking a pounding already! The drivers side rear side skirt had gone by the end! This one wasn’t it the boot by the end of the day!

Tests 3 and 4 went all good with some nice hairpins and straights to pick up some speed. A slight de-tour into a field on test 5 dropped us some time, but not too much! Then onto Test 6, little different from the diagram so we did have to do a 3 point turn in the yard, and then into the shed to 2012’s ‘impossible 90’, this time from the other way and with plenty of cow poo on the floor, so a bit easier! 7, 8 and 9 all went well without any major hitches, still losing body parts left right and centre, test 10 was again a little interesting around the pit, ‘keep right’ turned into a 90 right, 90 left 90 left, but the handbrake worked well! Then back to the start venue for another blast around Spencer’s Yard! Little more cut up this time with some large ruts forming after the bridge on the way up hill, sumpguard working overtime! Alex also took the first slot 90 right a little too tight and we took a hard hit on the side of the car, sending one of the wing mirrors flying!

Short break, depending on how much time you had lost, and then off again. A lot of cars with problems, our fellow Tigra crewed by Nick Giles & Ben Ruff had a rather large hole in the rad which caused them to retire and also a unusual camber option on Edryd & Dafydd Evans’ Civic!

On through the tests and onto 13, a rather surprising tight hairpin right after a shed caused a few problems as there was a little step and we had managed to get the sumpguard wedged on it, but we got up around and through the rest of the test which open out into some nice long straights towards the end!

Test 15 had a very tight uphill hairpin right that we struggled on as it was very wet and muddy! It had been used in 2011 I think and we just turned left and turned around by a run down building, this year it was taped off with some speccy’s behind, so while almost reversing over the bank and down towards the river some bouncing up and down and a lot of revving got the front wheel drive around! I could imagine it would have been a lot easier for the rear wheel drive guys! Maybe we need a Volvo 360 next year!

On test 17 the inevitable happened, the exhaust had come apart and the car was really struggling! So on the road section we pulled up and a fair bit of hammering and swearing managed to get the clamp straight again and kind of put back together. Still not correct and still a little louder, but a lot better then what it was like! Got to say thanks to Ian & Gary Taylor in the Subaru for lending us a spanner! Would of probably been game over if they didn’t!

So we took it steady through test 18 just so that we could actually get to the finish with the exhaust still on. Then back to test 19 with one last thrash around Spencer’s Yard. We were at the finish, didn’t worry about the exhaust and just went for it! Except the first slot and the river, due to previous experiences!

And that was it! Another brilliantly run Classic Tracks rally by Llandysul Motor Club! Got to say a huge thank you and well done to Glan and Arwel, Jamie Jukes and Family, all the Marshals and everyone else involved in the event! Spot on! Will be back again next year to give it a 4th go! 29th (2011), 27th (2012) and 19th (2013), 17th next year?!”

Thanks to @owznt (www.twitter.com/owznt), Chris Clark (www.facebook.com/chris.c.clark.90) and DA Photographic (www.daphotographic.co.uk) for all of the photos! Head over to their website for more photos and for contact details to buy yourself a copy!