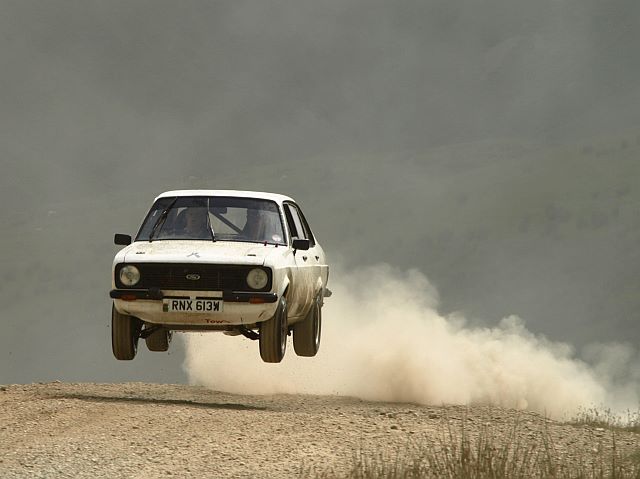 So again this year we ran the British Road Rallying.com Awards! This year over 1200 votes were collected across 5 Categories to be left with your favourite from each.
Also the results of the 2013 Rankings have been finalised! So here are your 2013 winners!

Photo of the Year

Neil Constable catching Lewis Morgan & Cadog Davies mid flight on the Ystwyth Road Rally.
This has to be one of my favourite shots of the year and a large amount of you agree with me! Neil won with 18.6% of the total votes.
I had a quick chat with Neil and his favourite event is the Ystwyth “It’s always a day filled with great action (thanks to the crews!) with great opportunities for photos! It’s always an event I look forward to.” Neil’s recently purchased a new external flash so you’ll see him getting out on a few more events this year testing it out.
Neil also mentioned he would love to give Road Rallying a go! “Something I’ve always wanted to do which I’m sure will happen at some point. Actually if any drivers read this and fancy giving a total novice co driver a run, give me a shout!”
“Would like to give a shout out to the crew of my winning shot too, as if they hadn’t attacked that jump I wouldn’t have had the pic, so well done to them!”
You can see more of Neil’s shots on his facebook page, www.facebook.com/neil.constable.129 and also out in the lanes near you soon!
In second place with 13.7% was DA Photographic getting up close and personal to the front of Kevin Kerr & Brynmor Pierce’s Escort Mk2 on the PK Memorial (DA Photographic, www.daphotographic.co.uk) and in third with 11.4% was Evan Gordon & Dan Williams pushing a little too hard on the Ystwyth in front of Full Throttle Photography (Full Throttle Photography, www.facebook.com/FTMotorsportPhotography)

Event of the Year

Chelmsford MC’s ‘The One & Only’ Preston Rally
With 11.8% of the vote’s Chelmsford’s Preston Rally tipped to top of the voting. Being at the start of December this is a lot of people’s final event of the year. And what a special event it is! With a route of approximately 120 miles with 90% of that off road it’s on many’s ‘To Do’ list.
Speaking to Brian Jaggs, Clarke of the Course, he mentioned this year was the 35th running of the Preston, missing one year due to Foot and Mouth disease.
He think’s there are several reason’s for it’s success “I think the attention to detail by the organising team, the commitment to recce work, route options, support from Landowners is significant. The surface variations, the fact that weather can change it dramatically, the fact navigation and route terrain is such that relatively easy navigational hand-outs still means that timing schedule can be challenging. Driver, navigator team work, a real test of both man and machine. Also I think the Preston is supported by a hard core group of competitors who I cannot praise highly enough, in the main they all understand the issues that I must encounter organising this mammoth event and respond accordingly. They have great humour and the feedback I get is almost exclusively aimed at improving things, which even they say are all minor issues. It is hard work but a joy to organise.”
Brian’s target for the 2014 Preston is to run the perfect event, “Some say the Preston is already and that an event of this size will always have issues so I have to be careful not to change something that is not broke. Every year I aim to get new land so that there is something different, avoid double use of any venues and slightly reduce Forestry mileage (to keep cost down). Oh and get another person on Board to help with the event Secretary role!”
The number of finishers this year was great, but the heroes who completed Berners under the target time given the condition of the tracks must have been epic to watch. The number of marshals and rescue crews and all others involved in set-up and on the night must also be thanked!
2012 Winner, the Rali Llyn took the second spot with 10%, The Rally of the Tests, Powys Lanes & the Xpart all took the third spot with 7.3% each!

Photographer of the Year 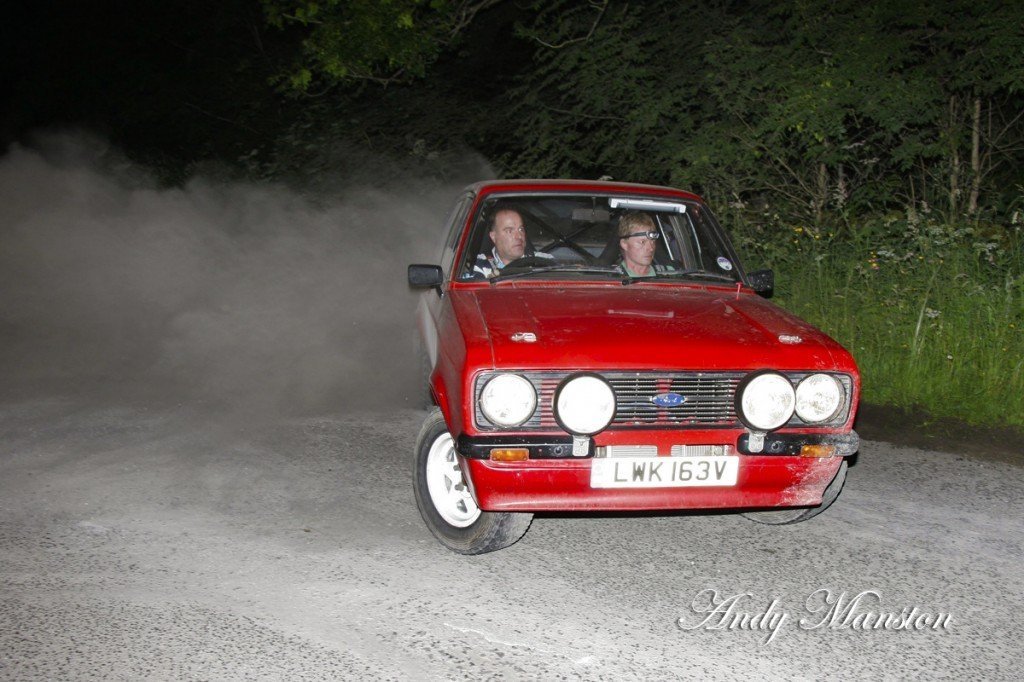 M&H Photography
With an impressive 53.4% (Yes! Over half!) of the votes, Andy of M&H Photography takes the top spot after coming second in 2012. 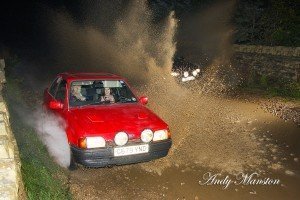 “It was a nice surprise to hear that I’d won. I don’t get over to the home of road rallying very often, so I wouldn’t have been surprised to be beaten by any number of the Welsh photographers. I’ve been at this game for quite a while now and still enjoy it, thanks to those of you who took the time to vote. Thanks must go to Dan as well for all the time he puts into his favourite past time.”
Andy’s based around Kent and covers a lot of the South, Eastern and Mid England events with a large range of different pictures. From classic open wheeled car’s drifitng during the day, to a Mk2 Escort sideways in the lanes at night, Andy cover’s most of it!
I asked Andy which event of 2013 he enjoyed best, replying “For the buzz… The Breidden, For photo 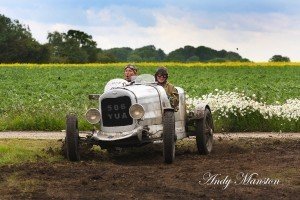 opportunities… The Preston” as well as which was he favourite shot “I’m not great at liking my own shots! Maybe Rich Hunter & Dave Leadbetter exiting Youlgreave hairpin in the red MK2 (Vodka Energy Rally, above centre) or for comedy value.. Craig Burgess overtaking Mick Smith in the massive puddle on the Jackson Trophy. (Above left)”
Andy’s first event of 2014 will probably be The XPart Endurance, so make sure you give him a wave if you see him out and about with his camera!
Make sure you take a look at the rest of his photos over at mandh-photography.co.uk
In second place with 12.6% was Power Shot Photography (www.facebook.com/powershotphotography1) and very close behind in 3rd is 2012’s winner, DA Photographic (12%) (www.daphotographic.co.uk)

Car of the Year 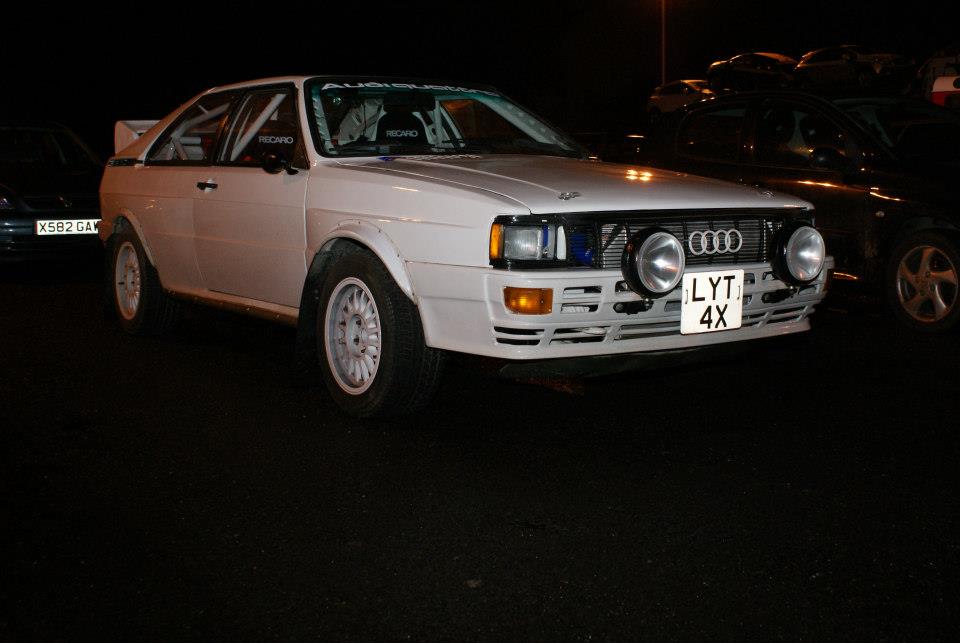 John Clark’s Audi Quattro (15.3%)
John has been a ‘quattro daft’ since he was thirteen! The quattro started his real interest in motorsport! “When I was a teenager, I promised myself that I’d have a quattro rally car and that I’d do the Monte Carlo Rally with it. This ambition has now come a lot closer to reality, although I expect to do a historic run to the south of France rather than a WRC event – even my ambition has to be tinged with a reality check sometimes!”
“With my navigator(s), we’ve won the Scottish Road Rally Championship several times since the early 90’s (as both non-ex and expert). The quattro project started back in 1997 when I bought a good road car and made it the UK’s first ‘rally rep’ as I simply couldn’t afford to turn it into a proper rally car. It sat in my garage as a show-piece for about twelve years while I was busy running a business and getting some savings together. In 2008, it was time to start building the dream which culminated in a road-legal rally car at the end of 2012 after spending over £150,000.00 on the (professional) build.
At this point, the car was taxed/MOT’s but didn’t have anything more than white paint on it, so we decided to give it a blast on the Aquarius Road Rally in order to help Richard Crozier drum up some interest in the event which hadn’t run for many years. In fact, I’d won the Aquarius over a decade earlier as a non-ex back in 1994 and I don’t think it had run much since then.”
There are no word’s need from me on this car! John has a brilliant build thread over at Classic-Audi which you can all make a brew and sit down a read!
http://www.classic-audi.co.uk/forum/showthread.php?t=14759
John’s not sure on his plans for 2014. “I’d like to do my home event in April (Granite City Rally) but I have to admit that the car is not being pushed to the limit on the stages. I simply can’t afford to replace it, so I’m going out for the fun of it and not with any intentions of breaking any records.”
In a close second place is Matt Abrey’s Ford Model A Special with 11.3% and in third Gordon Clendinning’s Vauxhall Chevette with 9.5%

Club/Organisation of the Year 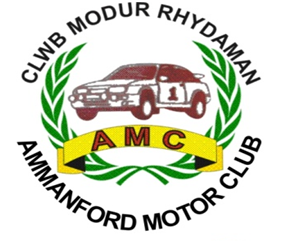 Ammanford Motor Club
Taking the first place with 24.6% is Ammanford MC. Located in Carmarthenshire, Wales Ammanford MC has several active member’s in the Road Rallying community and also organise the Mel Harries Memorial which saw a welcome return to the calendar this year!
Ammanford MC has been established since the late 80’s to provide a meeting place and interest for motorsport enthusiasts from Ammanford and the surrounding area. Regularly holding scatters, table-top rallies, quiz nights, treasure hunts, and a whole range of other social events the club is very popular in the area!
“We are firm believers in road rallying being an important starting post, but we also have members who compete on a regular basis in other levels of rallying; indeed we have members who have won BTRDA and Welsh Championships and even a few who have gone on to compete at the highest level of WRC!!”
You can find out more information on Ammanford Motor Club over on their website at ammanfordmotorclub.co.uk
In second place was Edinbourgh University MC with 15.6% and third was Chelmsford MC with 12.8% of the votes.

Voting will open again in December for the 2014 Awards!

If you would like to know where you came in the Ranking’s, or would like to see the whole Spreadsheet then feel free to email me at [email protected]