A new category for 2014 which was suggested by one of the guys of Facebook. This Category is all about those people who are a great aspect to the sport, people who put more into it then most, or just the bloke who shows up all over the place! We asked you to nominate some people and here is who you guys put forward. So take a look at the nominations below and vote for your most committed person at the bottom of the page! 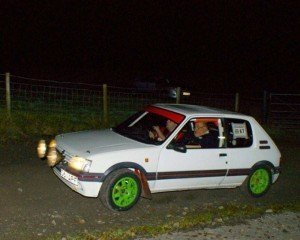 Several of you will know Gwyn or his son Matt who won the Welsh Road Rally Championship Semi-Expert Drivers award this year. Gwyn has been nominated because no matter where Matt goes rallying he’s there marshalling for him, on his own, in the middle of nowhere, in the freezing cold. And he’s almost 60! That pretty committed to the sport.

Jon has been at loads of event this year, either helping out or taking part. You can tell he is committed to rallying and very passionate about it, putting 110% into organizing and navigating , and it shows on every event he is part of.

“I’m getting sick of seeing Kev Haworth every weekend…” was a great quote on Facebook! A very committed organiser for the Vale of Clwyd, media co-ordinater for the HERO/CRA events and still finds the time to come out at silly o’clock marshalling on night events. The man lives and breathes rallying, plus seeing that balding head of his never fails to put a smile on your face…

Jamie came second to Matt Bowyer in the Semi-Expert Drivers category of the Welsh Road Rally Championship this year. He competes on a limited budget driving to and from each event and even camping on the beach after driving from south Wales to the north coast of Wales. Some people think driving to an event is planning for problems, but Jamie has shown otherwise!

Yes a few Photographers could have been nominated, but Andy from M&H Photography stands out to me. Andy hasn’t had the most successful year with Mother Nature ruining more then his fair share of events but he’s still out all over the country capturing everyone’s photos. With social media, websites and the internet slowly ‘killing off’ photographers in this way it’s great to see so many people still keeping it going and also the select few who still purchase images.

Dude has supported the WAMC championship (amoungst others) for ever! Year after year getting his backside kicked.. and finally he comes good… In spectacular fashion, winning 4 championships all at once. Incredible achievement and giving huge commitment to the sport. Deserves every bit of recognition, as I’ve had him alongside me organising, PR’ing, marshalling and helping out well beyond the expectations of everyone at WBCC for years. Those that know him also can back me up, he’s a pretty good chap too. Plays fair and will help even his biggest rivals. A credit to the sport. (He’s not on Facebook so I can brag him, to his face I just say he fluked it)

Most Committed Person of 2014