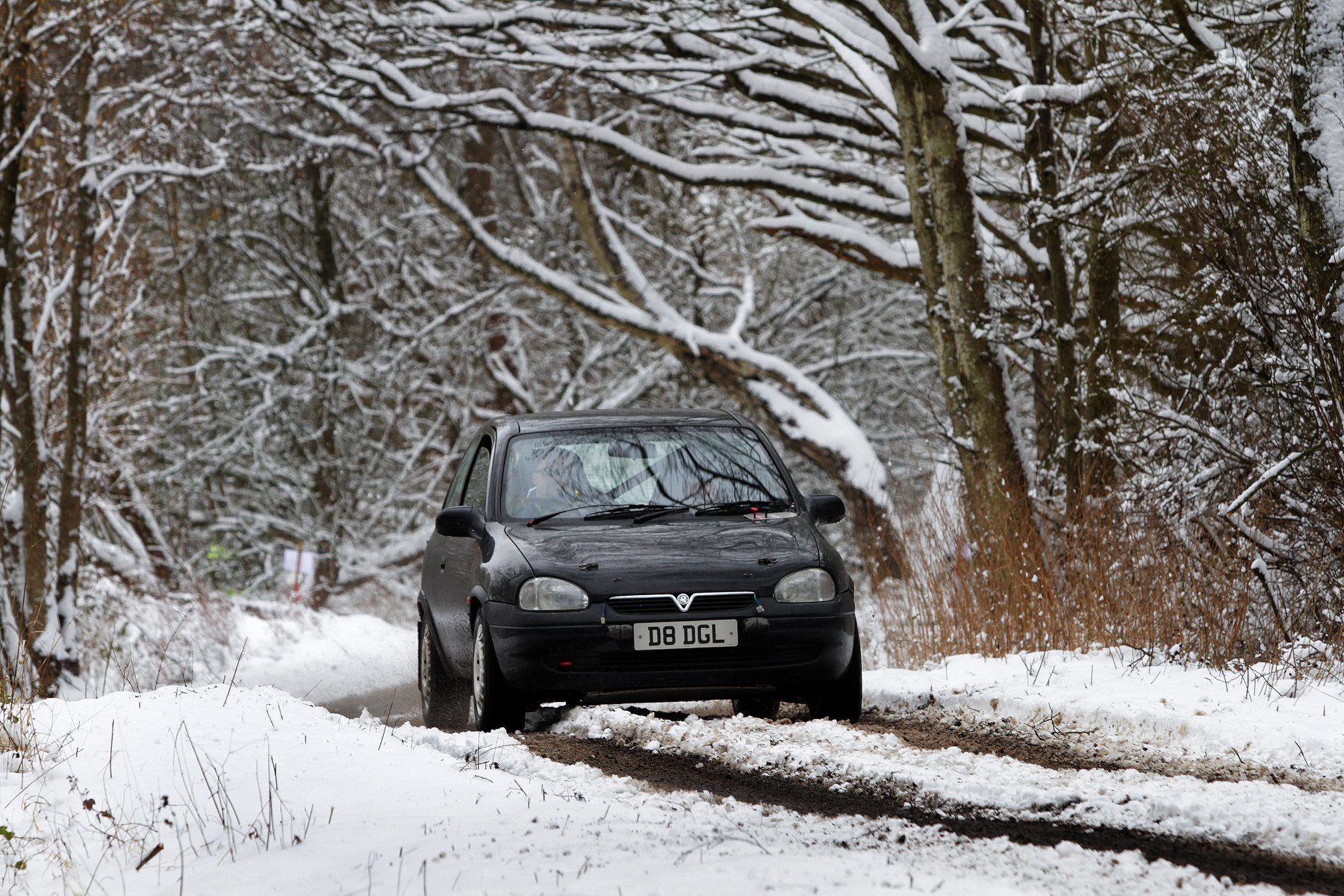 Last weekend’s Bramley Targa, organised by Farnborough Motor Club, took place at the Bramley Military Grounds. During the week running up to it the sub-zero weather forecast had cast doubt on the running of the event, so while getting ready everyone was still impatiently waiting for the organisers’ final decision. The organisers spent the Saturday setting the event up and with careful consideration, considering the private ground the event was taking place on, yet being close to all other vital amenities, the decision was made to go ahead with the event as planned.

We can only thank those marshals and organisers who had braved the overnight snowfall and turned up on the day to allow the crews to enjoy conditions that would rival the Monte-Carlo Rally, virtually on their doorstep. Even when some of the crews had been put off by the view outside their window in the morning, 73(!) marshals and countless organisers were among those who arrived early on the Sunday morning. As a result, this has been the first rally not to be postponed or cancelled because of this year’s snow. A true testament to the old spirit’o’rally flowing in the veins of Farnborough Motor Club and those affiliated.

I was among the crews that did not allow the unusual surface conditions to deter them from enjoying a day’s motorsport. As Targa’s are growing in popularity and entries grow year on year, there were crews who travelled from afar, some staying nearby overnight and then those who drove over two hours in the morning before the event. I was part of the latter.

Being one of the first crews to arrive at the venue, there was still an uneasy feeling in the air that we still might not need to unload the car. Within minutes more and more marshals and fellow crews arrived, finally, it was clear – we would be allowed a snow rally!

Any rally driver wanting to get some practice out in the snow to further their rally driving techniques would have to take a trip to Sweden, Finland or Switzerland, plus hire a rally car or transporting their own, then add hotel accommodation, food etc. Inspired by Rally Sweden once I personally looked into it and found that at a cost of £500 for just hiring a Ford Puma for four hours on one of the Finnish frozen lakes, it quickly became apparent to me that snow driving is by and large probably an unattainable pleasure for clubman drivers on a budget. Yet here, a brilliant opportunity had presented itself without breaking the bank and I was determined to hype my driver and others to enjoy it as much as possible. This was also the point I regretted giving up my entry and resorting to navigating.

The unusual weather and surface meant none of the existing result prediction rules applied. Everyone realised that everything was up for grabs and there was no way of knowing who would come out on top. It had also become apparent very shortly after the start that the starting order mattered more than anyone imagined before. Alan Wakeman of Oxford Motor Club led the way into the first test and as he had later put when navigating for his friend: “I was amazed at how much more grip there was 40 cars later! I was crying for grip on my first run, which was 1min13sec slower than my second run, and the test is only 3 minutes long!” Alan’s words represented reality. What used to be a path among trees completely covered in snow had quickly turned into a car width track of wet tarmac with snow all around it to catch out those who dared to venture towards the outsides, adding to the unpredictability of the best tyre choice. Suddenly, it looked like a wet tarmac tyre could be the best option but one would be harshly penalised if any corner of the car was to leave the tarmac tracks, leaving the tyre choice consensus largely unchanged throughout the event.
The day ran pretty smoothly with tests consisting of relatively long straights and areas of ‘diagrams’ to be completed around cones – a format very well known on single-venue airfield type Targa’s. With the added benefit of single venue Targa’s – the ability to double drive, i.e. when you swap seats and re-queue at the end of each test or a series of tests and enjoy double the fun. In total, 5 or 6 crews had enjoyed the double drive option instead of sitting around between tests.

As the day went on, more and more of the snow was melting away leaving a darker tarmac colour slush, which was now even more difficult to distinguish from the tarmac, yet it gave significantly less grip. The grip was still there but needed to be found.

The most successful among the ‘grip-seekers’ was David Lobb of Chelmsford MC, whom I had the pleasure to navigate for, taking 1st overall, despite 4 penalties for hitting (or touching) a cone. The largest amount he ever had in his 5 years of Targa rallying. It may be true that the marshals may have been more than generous with cone penalties here. However, whoever felt that they were being unfairly marked down on cones they did or did not hit only needed to look at other drivers results to quickly realise more than half the grid had received penalties in one form or another, with barely anyone making it through the day without any, at least the marshals were consistent throughout.

Another impressive feat was achieved by Bryan and Jack Cherrett, also from Chelmsford MC, coming in at their highest ever finish in 3rd overall and 1st in MA class. Bryan and Jack are also regulars on the single-venue Targa’s held in East Anglia and have only been on the scene for around 2 years, so coming in 3rd overall, was a very pleasant surprise for them. In fact, they were 2nd overall behind David all day only to be nudged into 3rd by the closely following Chris Valentine from Rugby Motor Club in his white Porsche 924, having shown an absolute class drive in the classic rear wheel drive car in snow all day.

What was very heart-warming to observe was the ratio of Novices to Masters at this event. It was outright dominated by both Novices and Experts in terms of entries with only 5 cars in total entered in Masters classes both below and above 1400cc combined. This is a true show how a Targa rallying is a perfect ground for novices coming into the sport.

Overall, having put in immense effort, the organisers have achieved their ultimate goal – providing a good day’s motorsport – a phrase used so often but the one that perfectly describes the day.