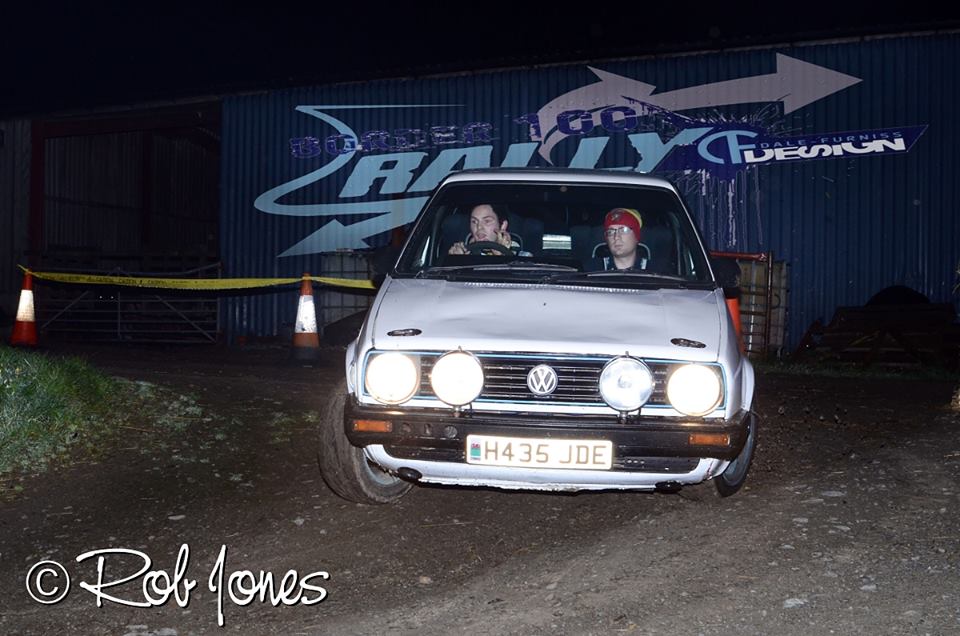 After the first monster section local crew and current Welsh champions Ian ‘Dude’ Roberts & Gwawr Hughes (Golf GTi) were leading dropping a total of 3:20. Another local in a Golf Dale Furniss & Nick Bloxham (Golf GTi) were second quickest running at car 1 dropping 4:05, with Iwan Jones & Stewart Merry (Mk2 Escort) dropping the same amount of time to tie in second place. Yet another Golf was in 4th, this time Mark ‘GT’ Roberts & Steve Price (Golf GTi) dropping 4:31 and finally rounding off the top 5 were Phil Turner & Dafydd Evans (205 GTi) with a time of 4:59.
Leading the way in the Expert class were class front runners Wyn Owens & Jenny Evans (Mk2 Escort) dropping a total of 7:18, quite a difference between the experts and masters! Second in class were Chris Young & Llion Williams (Nova) with a time of 7:40 and Russell Woolley & Aron Jones (106 GTi) rounded off the top 3 in class dropping 9:27.
Semi-Expert’s saw Eifion Thomas & Rob Stephens (Satria GTi) leading the way after the first section, I’m not surprised looking at some of the photos! They dropped a total of 11:39 with Polly & Chris Ashley (200 Vi) a further 49 seconds behind with 12:28. And finally in class Ieuan Owen Thomas & Declan Mason (Saxo) came in 3rd quickest with a time of 13:20.
The Novice’s had a bit of a tough time with some tight timings but quickest in class were Iwan Parry Jones & Rhodri Jones (Civic) with a total time of 15:59 with Mathew Evans & Tom Bishop (205) second with 18:33 and Mark Brotherhood & Bob Tansley (318ti) coming in third just before they retired with a time of 24:03

Section 2 was a lot shorter (I think every other section in the whole of Wales is shorter!) with just 2 crews cleaning it. The Semi-Expert pairing of Frazer Moss & Aled Jones (205 GTi) showed great pace with Furniss/Bloxham also cleaning to take the rally lead. GT/Price dropped just 40 seconds which moved them up to second overall with Kevin Davies & Aled Richards (Mk2 Escort) dropping 58 seconds and moving them up to fourth overall. Just outside of the minute mark were Guy Woodcock & Andy Pullan (Mk2 Escort) dropping 1:04.
Quickest in the Expert class were Alwyn Passant & Denny Harris (Impreza) showing good pace dropping 1:11 with Wayne ‘Tar’ Jones & Alan James (206 GTi) close behind on 1:23 and Young/Williams a further 2 seconds behind them.
Second quickest Semi-Experts were Thomas/Stephens dropping 1:40 to keep them at the front of the class with Thomas/Mason dropping 2:35 to keep their third position.
Novices saw Evans/Bishop push on and drop just 2:01 with class leaders Jones/Jones dropping 3:34. After the retirement of Brotherhood/Tansley Gareth Owen & Rhys Griffiths (Micra) stepped up to take third in class dropping 4:31

The third part of the night was in the style of a test with a short run up a yellow and then onto a lengthy and slippery route through a couple farms. Moss/Jones cleaned the section again showing that you don’t have to be a Master or Expert to keep up the pace! Second quickest were Turner/Evans dropping 1:26 moving them up to 4th overall. Jones/Merry dropped 1:31 with Davies/Richards close behind dropping 1:37. 5th quickest through the section were Experts Matt Barker & John Connor (206 GTi) dropping just 1:43.
Second quickest in the Expert class were Young/Williams to move them up to the top spot dropping 1:54 with Tomos Lewis & Dafydd-Sion Lloyd (Mk2 Escort) taking third with 1:55.
Thomas/Stephens were still at the front of the Semi-Expert class dropping just 2:08 with Timothy Box & Jamie ‘Butch’ Wilson (Impreza) taking advantage of the four wheel drive dropping 2:24.
Dion Bee & Osian Jones (318Ti Compact) set the quickest Novice time of 2:32 and also moving up to 3rd in class, an earlier fail currently holding them back from a higher position. Second quickest were class leaders Jones/Jones dropping 2:57 with Owen/Griffiths dropping 2:59 and moving up to second in class after Evans/Bishop retired.

Section 4 saw the third cleaner of the night for Semi-Experts Moss/Jones, an earlier fail though meant they were not in the running for awards just yet! Furniss/Bloxham were also on form dropping 19 seconds with Davies/Richard dropping 22 to move them up to 4th overall. Jones/Merry dropped 23 seconds with GT/Price dropping 30.
Not far behind in the expert class were Young/Williams dropping 37 seconds with Tar/James dropping just 43 seconds to push them up to second in class. Rounding off the top 3 were Lewis/Lloyd dropping 58 seconds.
Behind Moss/Jones in the Semi-Experts class were Thomas/Stephens again dropping just 1:12 with Box/Butch still chasing with a time of 2:08.
Bee/Jones were on a charge dropping just 39 seconds moving them up to second in class with Jones/Jones dropping 2:30. The remaining Novices crews cut quite a lot of the section with Daniel Williams & Rhian Angharad Sanson (Mk2 Escort) completing the most with just 2 fails.

The final section before petrol now, one hefty first half which has seen a lot of crews drop out. Turner/Evans dropped the least time of 57 seconds with Experts Matthew Jones & Osian Davies (Mk2 Astra) in second dropping 1:07. Third quickest was GT/Price dropping 1:19 with Furniss/Bloxham dropping 1:26 and Jones/Merry on 1:48.
Second quickest Experts were Barker/Connor dropping 2:23 with Mark Lennox & Ian Beamond (Ibiza) not too far behind on 2:30.
I think you can guess who were quickest in the Semi class… Yep! Thomas/Stephens dropping 1:52 with Polly/Ashley in second dropping 3:39 and Box/Butch in third with 3:13.
Bee/Jones were on form being one of only 2 novices crews to get to the section finish before OTL dropping 5 minutes and moving them up to second in class. Williams/Sanson were the other crew dropping 5 minutes as well with Jones/Jones missing the final control to stay within OTL, but still leading the class.

A splash and dash fuel stop quickly threw crews back out into the lanes for another longer section. Furniss/Bloxham dropped 29 seconds to keep them in the lead with GT/Price dropping 44, Jones Merry on 49, Turner/Evans on 59 and Davies/Richards dropping 1:11.
Young/Williams were holding onto the lead in class 2 dropping 1:33 with Lewis/Lloyd stepping it up dropping 1:40 and Woolley/Jones dropping 1:46 to move them up to second in class.
Craig James & Lewis Davies (106) must have used some super unleaded at the fuel station giving them the quickest Semi time on this section dropping 2:41. Thomas/Mason dropped 2:43 and Box/Butch dropped 2:49 keeping the class quite close together.
Bee/Jones were hunting the top spot in the novice class now being on the same amount of fails as the leaders, dropping 3:05 on this section. Ken Cawsey & Ashley Young (Saxo VTR) dropped 4:38 giving them the second quickest time with Williams/Sanson dropping 5:47 to keep their 3rd in class.

The 7th section was also another lengthy one with Jones/Merry coming out ontop dropping just 1 second! GT/Price dropped 5 seconds, Furniss/Bloxham dropped 11, Young/Williams dropped 26 and Turner/Evans dropped 51 seconds giving the quickest 5 crews.
With Young/Williams getting a 4th quickest time the next quickest in class were Lewis/Lloyd bumping them up to second in class dropping 53 seconds. Lennox/Beamond set another quick class time dropping 1:34 to round off the top 3 for that section.
In the Semi class Thomas/Stephens set another quickest time of 2:14 with Moss/Jones dropping 3:05 and Box/Butch dropping 3:22.
The Novice class looked similar as well with Bee/Jones still hunting for the top pot dropping 2:20 with current leaders Jones/Jones dropping 3:59. Williams/Sanson took the third spot dropping 4:37.

The 8th section looked similar to usual with Furniss/Bloxham coming out ontop dropping just 20 seconds. Davies/Richards came in second with 35 seconds with GT/Price taking third dropping 43 seconds. 4th were Jones/Merry who dropped 46 seconds with Young/Williams setting another top time dropping 46 seconds as well.
Second quickest in the Expert class were Woolley/Jones dropping 1:03 and bumping them back up to second in class with Lennox/Beamond taking another third position dropping 1:09.
James/Davies took the quickest Semi class with a respectable 1:01. Thomas/Mason dropped 1:25 with Box/Butch a further 5 seconds behind them.
Jones/Jones were fighting back dropping 2:25 seconds on this section with Bee/Jones dropping 2:50. Williams/Sanson took another top time dropping 3:29.

The 9th section was longer again but GT/Price and Jones/Merry both cleaned the section! Davies/Richards dropped just 10 seconds with Furniss/Bloxham another second behind and Experts Lewis/Lloyd dropping 23 seconds pushing them up to first in class. Both Young/Williams and Woolley/Jones had problems on this section picking up 8 and 5 fails respectively, disappointing after such great pace! Owens/Evans dropping just 46 seconds moving them up to the final award position with Jones/Davies dropping 58 seconds.
Thomas/Stephens kept things rolling with a top Semi time dropping 1:16 with Polly/Ashley dropping 1:25 and Thomas/Mason dropped 1:47.
Williams/Sanson were getting a little tired of third quickest in class so decided to drop 2:30 giving them the quickest time in class. Ken Cawsey & Ashely Young (Saxo VTR) had the next quickest time dropping 2:46. Bee/Jones had the next best time dropping 3:31 but did pick up a fail! Class leaders though also picked up a fail so it was still all to play for in the last section.

Last section now! The top 5 stayed the same with Furniss/Bloxham dropping 1:48, GT/Price dropping 2:02, Jones/Merry dropping 2:16, Lewis Lloyd dropping 2:31 and Stefan ‘DR’ Davies & Michael Gilbey (Mk2 Escort) dropping 2:48 to round off the top 5.
Lewis/Lloyd’s top 5 time secured their expert win with Owen/Evans dropping 3:21 to take them up to second in class at the last hurdle. Jamie Pickup & Jon Hawkins (306 Rallye) took the final top expert time dropping 3:48.
No change again in the Semi class with Thomas/Stephens setting another top time dropping 3:56 to give them the class win. Box/Butch took second quickest dropping 4:22 but it was too little too late with Polly/Ashley setting the third quickest time of 4:41 and taking second.
In the Novice class Jones/Jones looks like they had to cut the final section picking up 8 fails and dropping them off the top spot for the class, a real shame as they had obviously worked hard. Bee/Jones took the win with a final section time of 3:59. Cawsey/Young dropped only 2:31 but picked up a fail right at the end. Cutting the section both Jones/Jones and Williams/Sanson took third section spots with 8 fails each.

Full Results can be found over here.