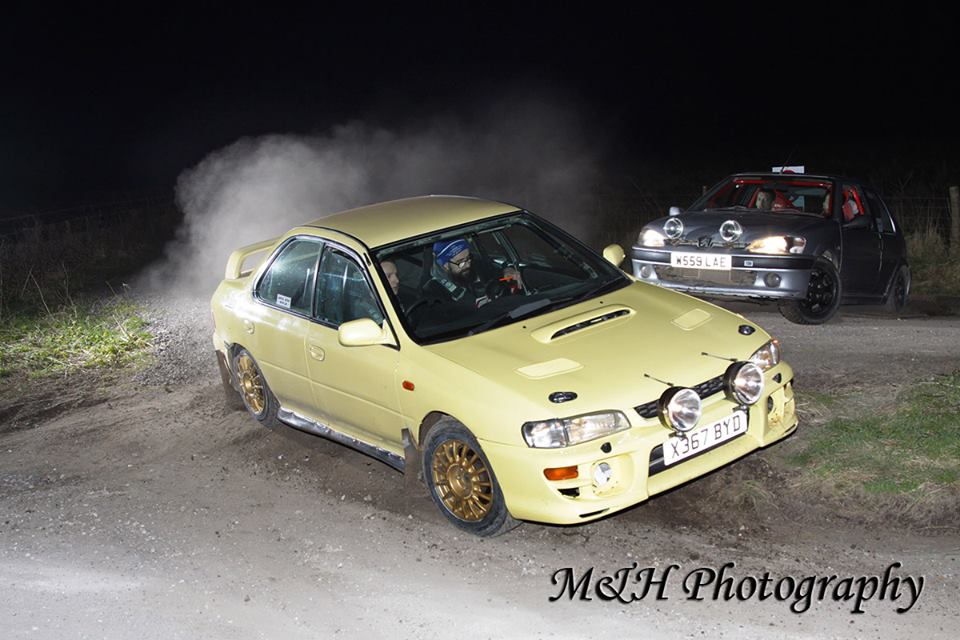 A year had passed since the last Bath Festival and somehow having forgotten how delightfully horrible you feel the Monday after an all-night road rally, I foolhardily put an entry in for the 2016 event. This edition was to be very much like the last, 120 miles of forests, white’s, farmyards and slippery lanes all based just south of Bath. Word had spread after the superb event 12 months ago and this time the 60 car entry was full in a matter of weeks, the organisers even managed to wrangle with the MSA to extend the entry to a maximum of 70 cars, with 66 actually starting on the night.

Queuing up at scrutinering it was clear that the pace was going to be scorching when a 2 litre MK2 escort popped and burbled up behind me to join the progressively more expensive and shiny line of stage car refugees. The fabled Welsh crews had come over the Seven Bridge in force and had brought along some serious weaponry in a brazen attempt to raid and plunder Bath Motor Clubs silverware. These were definitely not the usual little 1400 endurance cars we are used to!

Signing on yielded 6 pages of grid refs, diagrams, maps, time cards and other seemly vital paperwork. The intense sound of 2B pencils being sharpened helped focused the mind for the seemingly epic plotting job ahead. With that thankfully out the way we headed out to the cars to find beautiful but ominous ice patterns emerging on the still clean paintwork.  A quick half naked run around a sub zero car park at midnight in February did the trick of jolting a sleepy brain into action before strapping in and setting off into the dark.

The opening gambit was a 15 mile section using the gravel whites and other rights of way up on Salisbury plain. As we flew blindly past the famous white horse landmark we could have done with some jumping legs ourselves as we rattled flat chat over some pretty serous pot holes, Nick was not wrong when he said that we were lucky for once not to have proper bucket seats fitted, Vauxhalls finest standard 25 year old padding did a great job of comforting both our bottoms! You either go flat out over this terrain in a feeble attempt to “float” over the holes or slow right down, whatever you do, do not change your mind half way through! Needless to say that flat was the order of the day.

After this we visited the woods around the normally tranquil longleat forest, home to lions, tigers and holidaying family’s, all who were probably now being kept awake by the bark of numerous cars tearing around in the dark close to their respective enclosures. Several miss slots due to us both being out of practice cost us over 3 minutes, however after a mile long section of sweeping 3rd gear corners with the back end dancing sideways just on the wrong side of grip we couldn’t care less.

John Davies & Max Freeman (Astra) were proving their number 1 seeding dropping 1:12 over the next section almost 2 minutes quicker then Dei Jones & Iwan Jones (Mk2 Escort) dropping 3:10 and setting the second quickest time! Tod/Powell were a further second behind keeping them in the rally lead by 33 seconds. Quickest Semi’s were Mark Lennox & Ian Beamond (Anglia) dropping 4:17 with Stimpson/Graham a further 1:22 behind and Freeth/Head another 1:56 behind them. Fastest novices were Pat Thomas & Sam Davies (Mk2 Escort) dropping 11:50 moving them up to second in class with current class leaders Buton/Greenway dropping 14:48 and John Taylor & Rhys Williams (Rover 214) dropping 16:28 moving them up to third in class.

Out of the forests and on to the road rally proper, this was just as fast and frantic as expected with lots of visits to farm yards, showground’s, long way triangles, whites and other hazards to take time out of you. Run with sections timed to the second we very rarely had to wait for our due time, with us dropping a few seconds at most controls. The top crews were also dropping time but just that little bit less, it could be down to having quicker cars, less hesitation in the corners or simply just being much much more awesome, but to come so close felt pretty good to us mere mortals.

Morris/Phasey were quickest in the lanes dropping just 2:46 from petrol. Davies/Freeman unfortunately had mechanical problems which meant they cut straight to the finish and picked up several fails along the way! Second quickest were Tod/Powell dropping 2:54 and third were Matt Barker & John Connor (206 GTi) dropping 3:13. Quickest in class 2 were Simon Haywood & Sam Treleaven (Civic) and also 4th overall with an impressive time of 3:28. Second in class were Stimpson/Graham dropping 4:33 and in third were Scott Cleaverdon & Nick Angrave (106 GTi) dropping 5:04. The quickest in class 3 were Nick Burton & Derek Mines (Rover 25) dropping 7:39 and picking up a fail, Taylor/Williams were second quickest in class with a fail and a time of 12:01 and third in class were the back runners Ray Sissins & Julian Ellis (309) dropping 12:29 and a fail.

As the sun started brightening the edges of the distant horizon we came to the end of the last section and suddenly 5 hours of non-stop rallying was complete. The last time I did an event that was anywhere near as full on as this was the now mythical Carpetbagger of old, praise indeed for the organisers.

We were very happy to finish 20th overall in such a well supported event, without the small errors at the start we would have been about 15th and amongst the other highest finishing 1400’s. To move much higher in a field as good as this may need a little more grunt than the 80bhp wielded by “Ken” the little white rot box! Does anybody have a spare 1.8 Corsa SRI engine floating about?

In the end the spoils of the night were indeed taken back across the river into dragon country by Paul Tod and David ‘Garth’ Powell in a very flash non turbo Subaru Impreza, they were chased all night by a brace of trick MK2 Escorts and powerful 206 GTI’s but the 4×4 just giving them an edge in the forests.

For more reviews on Southern events check out NotAsMap.wordpress.com (A great name for a rally site!)

Thanks to M&H Photography (www.mandh-photography.co.uk) for all of the photos. Make sure you check out their site for more examples and for details on how to purchase yourself a copy!