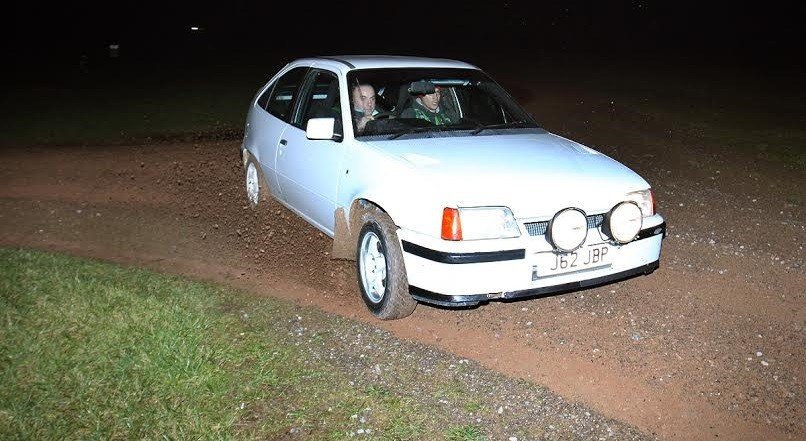 A rally, of which it has quite rightly been said, simply gets better with every passing year. I was unfortunate to miss ‘the year is snowed’ and was looking at the cold forecast with some interest; but it was not to come to pass: cold but dry let many drivers breathe a sigh of relief.

With a former International CoC at the helm, you can expect a well run event. Rather than a pensive CoC, the famous Whittock smile was much in evidence at the superb start facilities in Westbury. Bath MC are rightly lauded for the manner in which they run their road rally, which has been steadily drawing crews from further and further afield. Such it was that the event was full, with a healthy list of reserves, months in advance. Crews from the far north, from the Midlands, from East Anglia, and a sizable contingent heading over the Severn Bridge from their native rallying nirvana of Wales, all coming to sample the very best England has to offer.

Marshals too; seemingly everyone within striking distance of the Westcountry with a passing interest in rallying braved the bitter cold to stand in the lanes and help run the event. It may sound as though the event simply falls together, but as a hanger-on at Bath MC for some time, I can testify to the hard work that goes in to making things run smoothly on the night.

The CoC might have been relaxed, but navigators certainly were not, with fully 8 pages to plot. The jovial banter of the season opener in the start hall began to be accompanied by the feverish scribbling of massed Staedtler 3Bs and the swish of roamers over concertinaed paper.

An evolution of ethos, Mr Whittock decided bravely to reduce the number of tests, and decide the event in the lanes, with a navigational rally where every second would count. Off we went, too soon for some, into the night to the first of four tests. Welcome tests, to sooth jittery nerves.

It was soon clear that car 1, John Davies & Nick Bloxham, were out for a win; setting a blistering time of 2:11 around the Frome Showground. Gavin Rogers, partnered by Bob Rutherford, was in hot pursuit at 2:13 in the distinctive yellow MkII Escort FLY. A brace of eager semi experts followed, led by Mark Lennox and Ian Beamond in the Ford Anglia.

After all four tests and a short opening section of lanes to the east of Evercreech, Rogers & Rutherford had clawed time back on Davies & Bloxham to lead by 18 seconds. Lennox & Beamond were in close attendance, as were local Bath MC crew Mike Burrows & Peter Blackett. Notable performances from novices Frank Burton & Simon Greenway brought them inside the top 15. Test 3 also claimed the course car, Jamie Jukes and Ross Whittock rather ignobly losing a wheel, to provide an extra chicane.

It was now a straight fight in the lanes. Local advantage might have existed as crews ducked into farmyards and unmarked whites, tight slots obscured by high hedges as crews headed west past the Glastonbury Festival site at Worthy Farm, an extra code board foxing some crews, and into the tight nest of lanes around West Compton. We had the steering wheel come loose in the middle of a section in the Peugeot 106, which made for a very nervous few miles. Stopping in a neutral Dave Thorpe effected a swift wheel change.

Out now onto the very fast lanes over the levels of Queen’s Sedge Moor, another unmarked (and unarrowed) white took crews into TC16, several after making an incautious wrong approach, rectified with a swift about turn. At Petrol, a storming drive by Nic Morris with Martin Phasey on the maps had launched them into the lead by 48 seconds over a hard charging Lennox/Beamond, with South Hams crew of Scott Jonas & Chris Perry firmly clenching the Anglia’s coat tails. An early lead by Davies & Bloxham had been marred by some early arrivals. The novice tussle was now lead by Matt Barker & John Connor in 15th after an excellent section around Pennard Hill, as Burton/Greenway picked up a fail.

With Petrol served in Wells, crews then headed out over the Mendips to a second noise check, having satisfied this test, they queued south west of Chewton Mendip to enter one of my favourite nests of lanes and giveways. Unfortunately a householder, roused at an unsociable hour by rally cars appearing from all directions, took umbrage; the section was effectively neutralized for later runners.

The real action then, resumed north of Compton Martin with another unmarked farmyard track leading crews into the West Country’s Bermuda Triangle. The area around Butcombe and Nempnett Thrubwell regularly produces some very fine real ale, and some very very confused rally crews. The roads frequently do not seem to read right, and one wrong slot can result in minutes of confusion while travelling swiftly in the wrong direction! Having scouted the area thoroughly by bicycle, living just a mile down the road, I was in my element. I was gratified though, to note that Mr Whittock had seen fit to increase the difficulty of his challenge, by adding a few surprise sweeteners into the mix, courtesy of codeboards, farmyards and triangles galore.

A neutral restarted crews south of Hinton Blewitt, back up onto the top of the Mendips. At this point Lennox/Beamond had flown into the lead; Davies/Bloxham had fought back hard to trail by just 1 minute 22 seconds. Semi expert crews Lucas Redwood & Daniel Pidgeon and David Thorpe & Andrew Lowe were contending second semi expert in 7th and 8th, respectively, while Steve Lloyd and Dave Dewson were the only novice crew not to have picked up a fail.

Bath MC 12-car home country of the East Mendips around Binegar and Mells provided crews with a mix of fast and open, or tight and twisty to keep navigators honest to their schedule. Bounced across maps around Faulkland, Lennox/Beamond committed an uncharacteristic error to miss a passage control south of Wellow, earning a fail and halting their challenge. A couple of tasty whites lead crews down to the final time control by Midford, and the trek for breakfast.

At the finish, Davies/Bloxham claimed top honours by 41 seconds from Rogers/Rutherford. 1 min 40 seconds further back were Morris/Phasey, while top Bath MC crew went to Burrows/Blackett in 6th. Thorpe/Lowe had clinched the 1st semi expert tussle from Redwood/Pidgeon after the downfall of Lennox/Beamond, while Burton/Greenway claimed first novice having restricted themselves to just one fail, and a time that otherwise would have placed them firmly in the top 10.

Thanks to M&H Photography (www.mandh-photography.co.uk) for all of the photos! Head to their website for more examples and for details on how to purchase yourself a copy!