My first road rally for a few years and first time driving (Muriel) the Micra on a road rally. 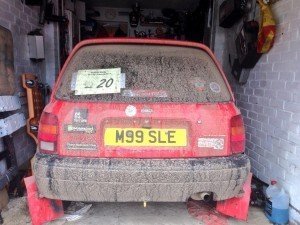 Firstly a MASSIVE thank you to all the marshals and organisers for standing out in some horrific cold, windy and very wet weather – all just for us to have a play – many many thanks!

All the usual pre event stuff was fine, scrutineering was a nice venue and slick work. Start/finish venue worked well, a decent dinner was nice. Lots of pre event work for Lizzie and maths for me working out OTL and due times. OTL times would be handy as it turned out…..

The first part of the event on the tests :-

Tests 1/3 – Great fun, a proper wake up call and lovely gravel.
Tests 2/4 – I was too cautious and a delay with a PC lost us some time.
Tests 5 – 7 – All great great fun, fast flowing tests, all well set out – felt like a shortened WRGB – proper rallying. Pleased to be just 5 secs (iirc) off Owen on the long 7 min test.

The two regularity sections all made sense, I suspect if you had done the event before you would have known what to do better from the off. But a good concept to give a different result.

Now on to the road rally…

Then it all went wrong…. a short LWR on a very muddy section I stopped to read the PC board and that was it we were stuck, I tried all the reversing, lock to lock tricks but nothing. Lizzie got out to push (thanks) and then we finally got moving. After this it took a bit to get back on the map and then we struggled to find a PC board in a maze of junctions and crossroads all around a load of houses. We got it in the end, but combined with getting stuck we lost 10mins…

Combine this with the road rally section starting 9mins late (anyone know why? Editor: Lateness due to safety reasons of marshals moving along a tight rally route) we were now getting close to OTL, which we would be edging closer to all night.

Just after this was the flooded section, luckily I let car 33 past as they were much quicker than us. They slowed down for the water, which allowed us to slow right down. There was already one car drowned out and poor Freddy out here too, it was VERY deep and with the air intake on the front the car I couldn’t afford for a bow wave to form. Creeping through we just made it. However then in moments when we stopped to see if Freddy was OK the car steamed up and we lost more time (a good few mins) waiting for the screen to clear enough for me to be able to see out. The carpets are still wet now!

The rest of the road rally section was all very fast paced and relentless with no breaks or rests. The not as map LWR’s all worked well, thanks to the large diagrams, I could glance over at them whilst driving just before the junction. Due to be being so close to OTL we couldn’t afford to drop any time even at NTC’s so thanks to those to moved over to allow us through. Also thanks to the Volvo who let us past towards the end of the second regularity.

We spent a lot of the last section of the night chasing / following the LHD 206 Cup Car which was great fun.

Playing the ‘what if’ game, that we can all play, if we hadn’t lost all the time with getting stuck and struggling to find that PC board we would have been knocking on the door of the top ten which would have been pleasing.

Thanks to Lizzie for a top job of telling me where to go, and for pushing us out of the mud. In the end we finished 27th out of 44 finishers and 53 starters.

Matt Endean, Driver – Car 20, Nissan Micra
Keep up with the rest of Matt’s events and the progress of the Micra at www.mattendean.co.uk

A brilliant event from Bath MC!

First of all a big thank you to Dave & Ross Whittock, everyone at Bath MC and all of the Marshals who stood out in the cold and the rain throughout the night!

Pat was off on a stag do and Rob was a little short on cash so I was back in with Lucas, this time in the mk2. Noise, Scruitineering and signing on all went without a hicup. The start venue was brilliant in my opinion. A large area inside for everyone to plot, eat, drink, mingle. Very relaxed rather then some events which are all rush rush.

The start of this event included 7 special tests across various terrains. Test 1 and 3 were around a showground with large wide roads with lost of 90’s to kick the back end out. 2 and 4 was a short slippy tarmac test under a railway bridge and up to a farm. It was used on the Great Bustard late last year so some of the Enduro guys would have done this one a couple times before!. 5 and 6 was around a forest with some fast flowing corners. Half way round test 5 we came across Simon Ayris and Alan Smith with the nose of their Astra in the ditch, looked like they had a bit of a tank slapper! Also at the end of the test was Mark Lennox and Ian Beamond with mechanical issues, a shame as I’m a big fan of this car! Test 7 was a bigger loop in a forest with a small section of large s bends which seemed to go on forever.

Out of the forests for now and were running 9th (which we are both very happy about seeing as who we were up against). The next couple sections were regularity tulip hand outs, at first I was just following the tulips and eventually getting to each tulip, but a couple night long straights let me get the route down on the map, not too much time lost here.

Onto petrol now which turned out to be a little interesting with only 2 pumps working. But thankfully we had enough time to sit in the queue (and push the car in due to it not starting, later turned out to find the battery had smashed it’s way out of its box!). Due to the petrol station shop being closed Bath MC had a lay-by nearby on the A303 with a cafe open for us all providing hot food and drinks, a brilliant touch!

One more blasts through the forest on a regularity, this was test 7 and test 5/6 joined together so we had a little idea of what to expect. This was held up a little due to some of the marshals moving between PC’s within the forest, but a good decision to make us wait rather then car 1 come across a marshal plodding up the forest!

Now onto the lanes. It started off quite fast but for the top cars a little relaxed on the timing. Some of the roads were quite wide so we were coming in on our minutes for most of the time. We did have a slight problem with one car ahead falling behind onto our minute and not pulling over. We had a good hour behind this car before we managed to get past later one.

Then we came across the flood which was warned to us at the start. The road was technically closed but due to PR this was the only route for us. It was where the road sunk down under a railway bridge and the rose back up to some buildings. When we turned up there were 3 or 4 cars the other side all stopped with the bonnet up, so we took it fairly slow but kept moving. Unfortunately at the next GW (around 200 yards after the flood) the car cut out and wouldn’t start again. After pushing it out the way we opened the bonnet to try and see what was wrong. The first thing we noticed was the cooling fan blades scattered around the engine bay, we presume the water was that deep the fan must have hit the water and taken off all the blades! But after a couple minutes another attempt of starting the car and she fired up, so it was quickly back in and up to the next TC, luckily only dropping 2 or 3 minutes!

The rest of the night went well with only a few mistakes/problems (my first ever miss plot! I hang my head in shame, taking the wrong road on the map swap, one unhappy resident driving slowly along the road, and a TC sooner then we thought giving us a 2 minute early arrival, we were not the only ones).

The final little section of the night was on a marked map, another blast across some fields and some private land was a nice little touch and an ending to a brilliant night!

To be honest doing this event made me a little gutted I missed it last year! I will definitely be back in the future as I’m sure this will still be one of my favourite events of the year by the end of December.

Thanks to Lucas for chauffeuring me around for the night! We came away with 18th o/a and 6th in class after the mistakes. It could have been a lot worse, but we were both smiling at the end of the event!

Thanks to Photo by M&H Photography (www.mandh-photography.co.uk) for all of the photos. Make sure you head over to their website for more photos and information on how to purchase yourself a copy.